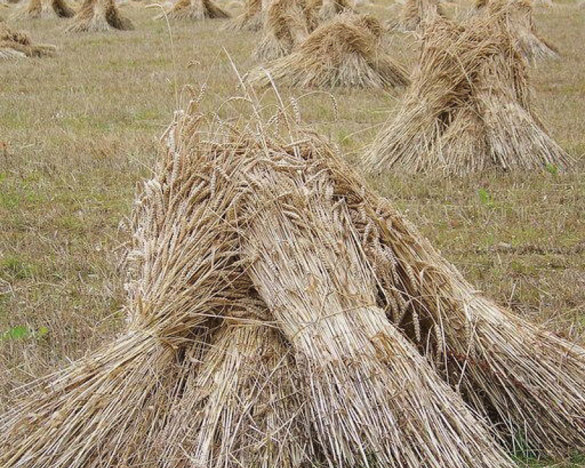 Nov. 6—World food prices are soaring. The October monthly UN FAO Food Price Index (Food and Agriculture Organization) showed food prices up 31% over the same time in 2020, with no peak in sight. Food prices have risen for three months straight, with nearly a 4% jump from September to October. This is bad in itself, but worse is imminent—global shortages—unless national governments break precedent with the (rigged) “free market” patterns of food control by the cartels and globalists, and intervene to see that coming harvests and animal protein production are sustained, and expanded on a scale adequate to prevent mass famine.

Today’s worsening food supply crisis has been caused by decades of increasing concentration and control of food by the commodity wing of the Wall Street/City of London global finance establishment, and by the green agenda dictates of the same crowd. There are no “natural” food production limitations. Even the effects of storms, droughts, soil infertility, extreme temperatures and the like are all subject to technological and scientific intervention, if policy is oriented toward expanding food, not the green, de-population objective.

The key factors for reliable food are, first, plentiful energy and infrastructure (transport, storage, disaster defenses, water), both of which are now in crisis; second, government-to-government collaboration, to take the needed measures for emergency support to farmers to produce, and for provision of emergency food relief to the millions in need.

The FAO Food Price Index, issued monthly, comprises five basic food groups (cereals, edible oils, dairy, meat, and sugar). The data used are prices of these commodities as traded between nations. In recent months, the rise in prices of cereals and vegetable oils has given the biggest kick to the Index increase.

A snapshot of the world cereals situation at present, in terms of inadequate output and availability, shows the danger ahead. Grains are a good metric of overall food adequacy, because they are the largest component in the diet of most everyone in the world, as consumed in the various diet cultures—bread, tortillas, noodles, pasta, couscous, and other such food products. Grains are also important in the livestock feed chain. 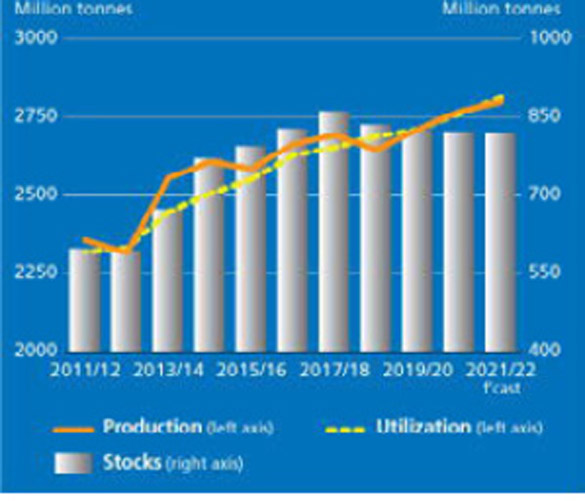 Figure 1 shows annual world production volumes of all grains (rice, corn, wheat, rye, buckwheat, barley, oats, teff, etc.), and the level of stocks—considered as reserves or carryover year to year. Stocks have been going down for four years straight; production has been barely creeping upward. Since the 1990s, per-capita grain output has been in decline. Now, three decades on, more than 800 million people —on the order of 1 person in 10—are “food insecure” (as the aid agencies term it), and there are millions at the point of starvation, as described below.

Here’s the cereals update from the Nov. 4, 2021 FAO World Food Situation—Cereal Supply and Demand Brief. The estimate for total world grains (cereals) production in the 2021-2022 crop year is 2,793 million metric tons. Although this is 0.8% higher than the last crop year, the hyperinflation, and shortages (of fuel, machinery parts, labor, etc.) during the Northern Hemisphere harvest time, as well as during the Southern Hemisphere crop planting season, can drag that figure even lower. From natural gas to chemicals, inputs are soaring in price and increasingly scarce.

That level of 2.7 billion tons of total grain output is already way below adequate. To calculate a level of adequacy, start with the figure of 50 to 60% of a metric ton of grains that should be produced each year per person. This then sets a goal in the range of 4.7 billion tons for the present world population. Providing this level of ample food calls for an effort to, in effect, double world grains output. Curbing waste can offset this magnitude somewhat: irradiation can kill pests and prevent rotting; increasing output of tubers or other non-cereal staples can also play a role. But there is no moral, economic, or scientific excuse for intending to produce less, and tolerating people needlessly suffering hunger and dying.

One remarkable demonstration of how the potential to boost yields can be realized, took place just this October in China. The second harvest this year, of a double-crop of a new type of rice, was gathered in Hainan Province, in the Sub-tropics, giving an outstanding annual yield of 22 tons per hectare (2.5 acres) from the two harvests combined. The first harvest and then replanting was carried out last December, 2020, supervised by famous crop scientist Yuan Longping, revered as the “Father of Hybrid Rice” for his achievements in the 1970s. He passed away in May at age 91, before seeing this double-harvest rice project completed, now a testimony to his legacy—and a call to emergency action. 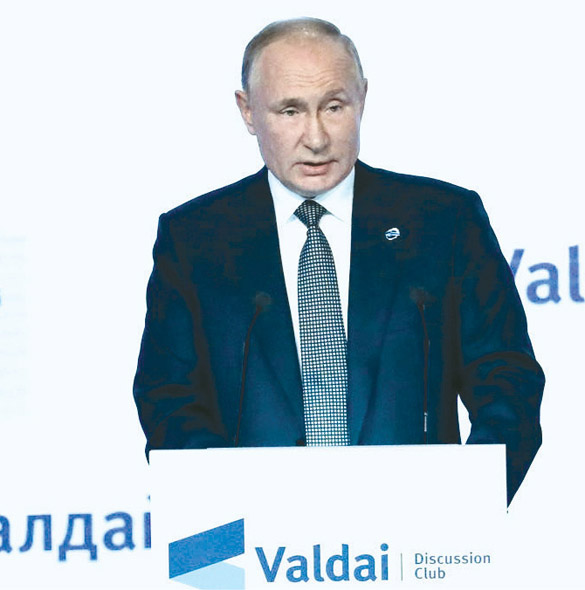 Two of the most dramatic cost spikes for grains production are in fertilizer and fuels. Nitrogenous fertilizers are essential for maximum yields of corn, wheat, and other grains. Manures, slurries, night soils, composting, and all manner of soil enrichment are important, but no replacement for timely and scientific application of chemically produced fertilizers. Natural gas is a feedstock for ammonia and urea fertilizers. Its price has tripled in Europe in less than a year.

The biggest monopoly firms in the world fertilizer cartel are simply reducing nitrogen fertilizer production. Svein Tore Holsether, CEO of Yara, the Norwegian based firm, ranked in the top three internationally, said in the Nov. 4 issue of Fortune,

I want to say this loud and clear right now, that we risk a very low crop in the next harvest. I’m afraid we’re going to have a food crisis…. To produce a ton of ammonia last Summer was $110. And now it’s $1,000. So, it’s just incredible.

Other fertilizers, including phosphates and potassium, are also hyperinflating and in uncertain supply. This calls the question on the need to finally end the cartel grip on whether and how food will be produced. Governments have a sovereign responsibility for the food supply.

For example, the National Corn Growers Association (NCGA), joining with other agriculture groups, issued a warning Oct. 29 of fertilizer shortages and called for phosphate sales to be permitted in the U.S. from Morocco—currently the world’s biggest source for the mineral, which is impeded by high tariffs from entering the U.S. market. “Farmers are feeling the pain from these tariffs,” the NCGA said. “We’re facing severe cost hikes on our fertilizers, and we are worried about fertilizer shortages next year.” The 2022 U.S. corn crop is threatened, given that Mosaic (a spinoff from Cargill) dominates 80% of the phosphate fertilizer supply in the U.S. and will not have enough for U.S. corn growers, even it were affordable. The U.S. alone accounts for more than 30% of all the world’s corn harvest and 40% of the annual corn traded internationally. Thus, anything short in the U.S. is automatically an international crisis.

Russian President Vladimir Putin recently addressed the food question head on, when he spoke of food security as one of the “fundamental considerations” that must be taken up by nations. On October 21, speaking at the annual meeting of the influential Valdai Discussion Club, he proposed that Russia could increase natural gas production in order to supply more Russian fertilizer to the international market, to help head off the looming global food crisis. He said:

Fertilizer producers that use natural gas are already closing their manufacturing facilities. This is already happening.… What will this result in? There will be less food on the global market, and people will have to pay higher prices. Once again, it all falls on the people…. The quality and quantity of harvests, the volume of crops depends on them. But we supply the necessary amounts of fertilizers to international markets, and we are ready to increase production further. 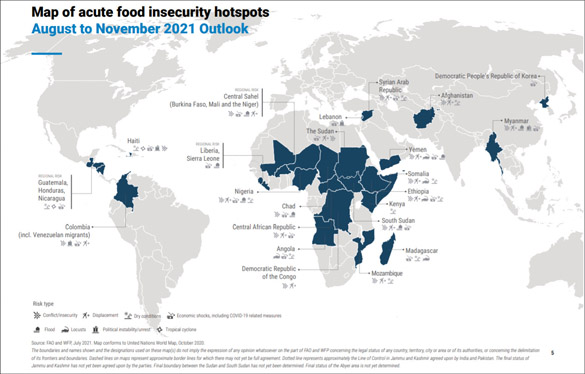 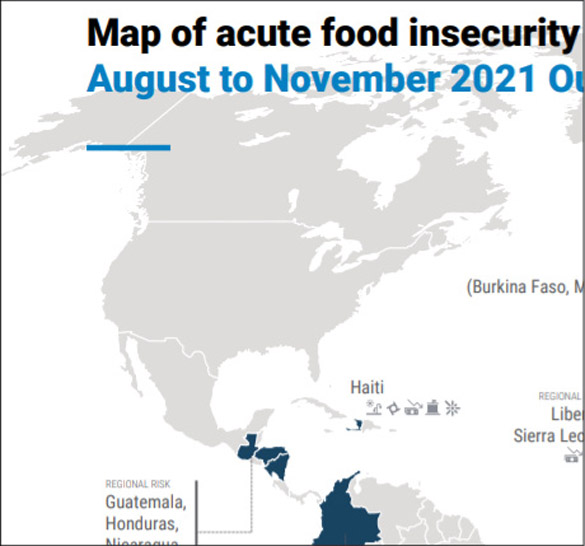 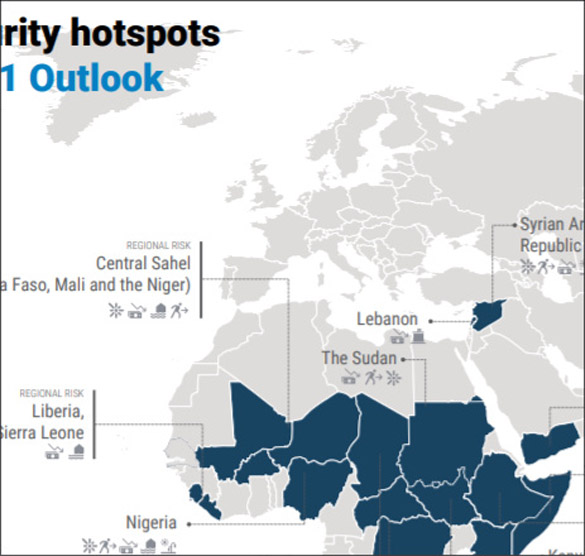 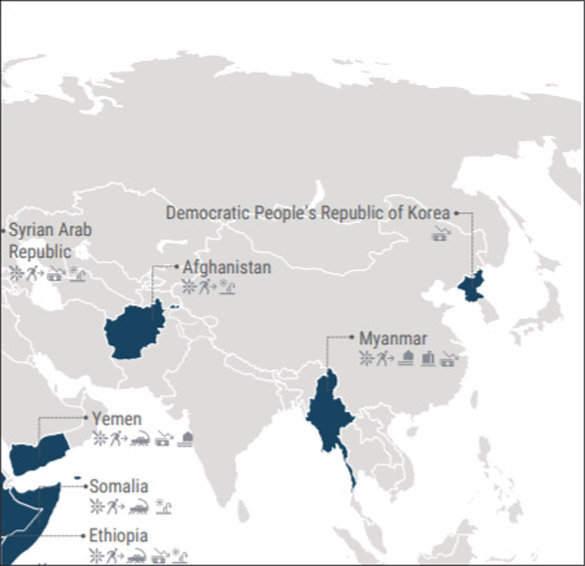 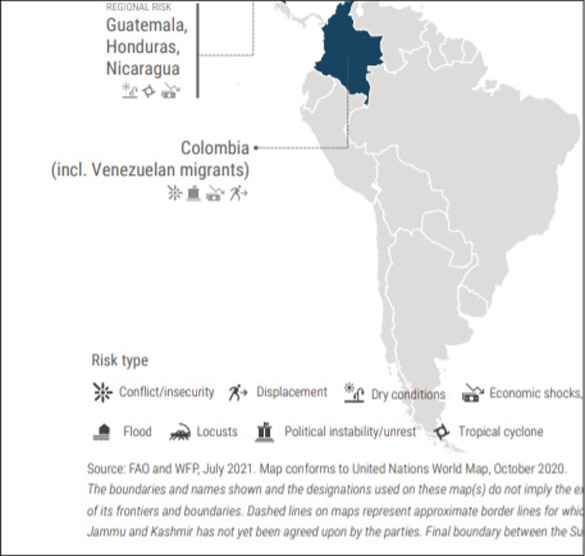 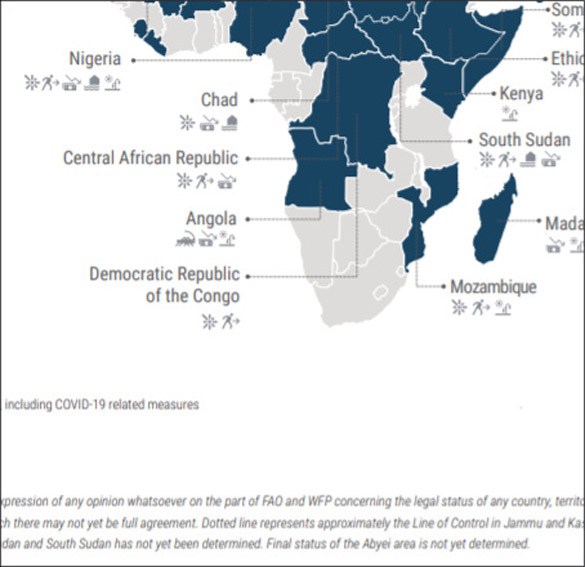 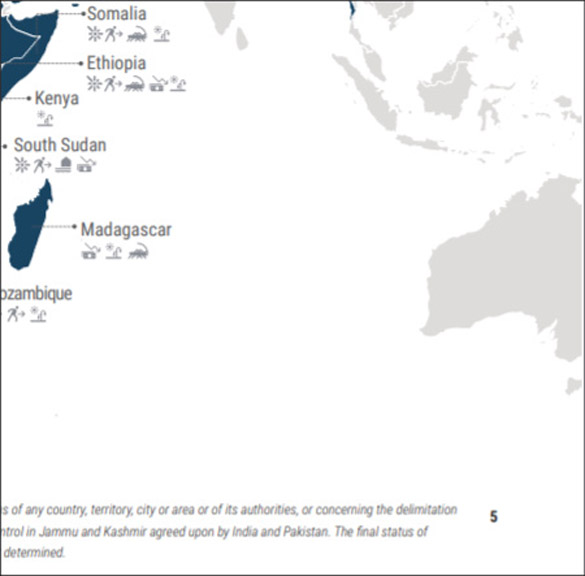 Millions of Lives at Stake

Even before these scenarios of 2022 world crop shortages play out, the current need for dramatic increases in grains and other foods could not be more clear. The map in Figure 2 gives a snapshot of the location of “acute food security hot spots,” depicted as of late Summer, situations currently worsening for lack of food relief and inputs for crops for next season. The map is part of the report, “Hunger Hotspots: FAO-WFP early warnings on acute food insecurity. August to November 2021 Outlook. (Rome 2021)” It’s executive summary states: 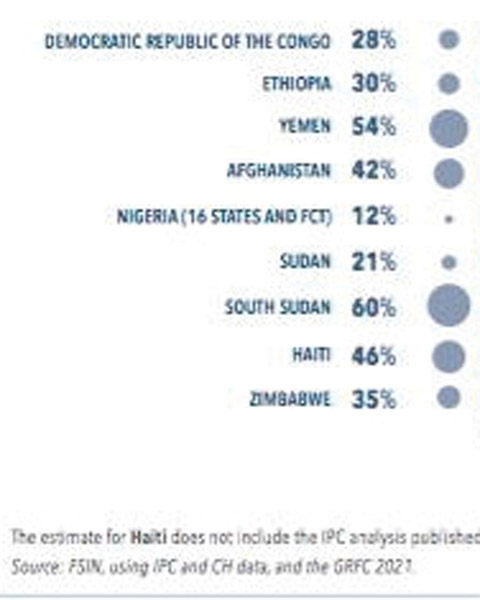 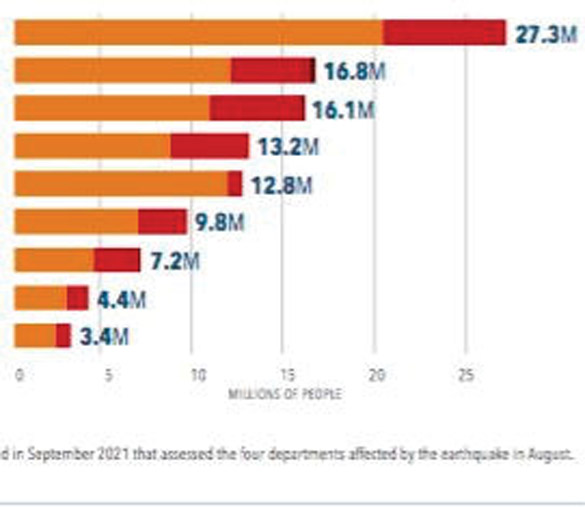 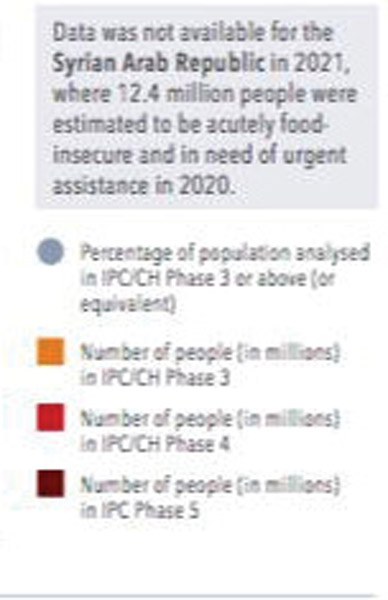 Leading the list in numbers of people affected are the Democratic Republic of Congo, Ethiopia, Yemen, Nigeria, Afghanistan, and Syria. The report further says:

[T]he alarming rate at which acute food insecurity is rising globally, as was forewarned in the past three editions of the FAO-WFP Hunger Hotspots report. In 2020, 155 million people were estimated in acute high food insecurity…across 55 countries/territories, up by 20 million from 2019.

As of this Fall, this number has grown by another six million, to 161 million, and is rising relentlessly. Action in Afghanistan was highlighted in a Nov. 6 appeal from the World Food Program.

We estimate that 40% of Afghanistan’s wheat crops have been lost to drought, while emergency food supplies are running perilously low. Winter is rapidly approaching, and we are working to preposition food in strategic locations before it’s too late. Because 1 in 2 Afghans do not know where their next meal will come from, we are aiming to reach 14 million people with emergency food assistance by the end of the year…. Up to 95% of Afghan families are currently struggling to get enough to eat.

This is just one nation of 39 million people, now plunged into desperation over food. The U.S. must immediately release the $9 billion in holdings belonging to the Afghan government and people, simply to support the nation’s immediate functioning. The world anxiously awaits the collaboration of the U.S. with other major powers to launch the emergency measures for food, basic health, and economic security everywhere.