Is There a Pathway for an Improved Relationship
Between the United States and Russia?

This is the edited transcript of the presentation delivered by Dr. Andrey Kortunov, the Director General of the Russian International Affairs Council to Panel 1, “Can a Strategic Crisis Between the Major Powers Be Avoided?” of the Schiller Institute’s Nov. 13-14 Conference, “All Moral Resources of Humanity Have To Be Called Up: Mankind Must Be the Immortal Species!” 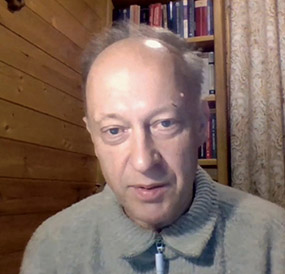 It is definitely my honor and my pleasure to be a part of this conference, and specifically to be a part of this panel. A lot has been said here already, and I think that my major contribution to the discussion is that I am bringing some gender diversity into an otherwise completely female panel. So, let me try to share with you some of my views on the current state of the bilateral relations between the United States and the Russian Federation; where do we go? But before doing that, I will take the liberty to get back to the legacy of Friedrich Schiller. Since it’s a Friedrich Schiller Institute and a Friedrich Schiller conference, I think it is appropriate to be reminded of the wisdom of the great German thinker.

We usually recall Schiller as a poet, and as a writer, but he was clearly more than that. He was a visionary, he was a philosopher, he was a teacher and an educator. He wrote a couple of serious books on enlightenment and on education. I would like to get back to one of them, which is called, On the Aesthetical Education of Man. I don’t recall the exact quote, but I do remember the sense of his message. He wrote: Live with your century, but do not be its creature. Work with your contemporaries, but create what they need, not what they praise.

I think this is a very important message which is very relevant to the situation that we face today in international relations. Political leaders of today usually try to provide to their constituencies what these constituencies want, rather than what these constituencies really need. Leaders try to follow opinion polls; they try to reflect the fluctuations in the public moods. I wonder whether we can really call that leadership. Leaders should be in a position to make steps that are perceived unpopular or risky, and steps that many would oppose. If you want to lead, sometimes you have to turn your back to your constituency. You should be in front of the constituency, not following the constituency.

More Conversations with the U.S.

I think this is something we should remember when we talk about current U.S. policies, including the U.S. policy towards the Russian Federation. We are approaching a small anniversary; six months since President Biden and President Putin met in Geneva. That was in the middle of June of this year. Many people hoped that this meeting would possibly mark a turning point in the relationship. Maybe the two sides started to move away from the crisis, away from this very difficult relationship that they had for at least a couple of years. Indeed, one could argue that there were some positive changes in their relationship over the last six months. Most importantly, we now have resumed arms control negotiations between Russia and the United States.

It’s an uphill battle for the two sides, there are very different approaches on how we should proceed beyond the new START agreement. Russia insists on talking about strategic weapons at large, both nuclear and non-nuclear, while the United States would prefer to focus on nuclear weapons, strategic and non-strategic. But anyway, this dialogue is on, and hopefully it will bear some fruit before the new START agreement expires.

We are also having more general conversations with the United States on strategic stability. Again, this is not an easy dialogue. I think that the starting positions are very different, and it is quite a challenge to reconcile different perceptions on strategic stability. Nevertheless, I think it’s already quite important that this dialogue is going on. Let us hope that it will be productive and that it will lead to some common strategic culture of the 21st century.

Finally, last but definitely not the least, I’d like to emphasize the importance of the U.S.-Russian dialogue on cybersecurity. Many people were very pessimistic about this initiative; they thought that it would fail shortly after it was launched. But it seems that the dialogue goes on, and it seems that it is not hopeless.

However, having said that, I think I would wrong to argue that there was a breakthrough and that the relationship has changed dramatically for the better. Unfortunately, this is not the case. We see the diplomatic war between Russia and the United States going on. There are fewer and fewer diplomats left in the Russian Embassy in Washington, and in the U.S. Embassy in Moscow. We definitely have a serious information war between the two states, and just recently the United States has accused Russia of mounting troops on the Ukrainian border, which Moscow flatly denies. Incidentally, at this particular juncture, Ukraine also denies these accusations of the United States. We have more and more sanctions imposed by the United States on Russia, and quite divergent positions on many regional issues.

So, one can say that the glass is half full, or it is half empty. I think the last six months demonstrated that no reset is possible; no détente is likely to take place anytime soon. Primarily because the two sides have fundamentally different views on the world, on the international system, on what is fair and what is not, what is legitimate and what is not in international relations. Nevertheless, I think that even under current quite challenging circumstances, there are opportunities of moving ahead. Although the United States will continue to pursue its dual containment policy targeted against both China and Russia, I think both China and Russia have opportunities to look for some arrangements with the United States on specific issues.

One good example that I would like to think about is the agreement of all three major powers to extend the 2020 United Nations Security Council Resolution on humanitarian corridors in Syria. I think it was an important decision, and it allowed to avoid a conflict and arguably a humanitarian disaster in the province in Idlib. If we are able to agree on Syria, I think we could probably agree on Afghanistan. Though I fully subscribe to what has been said by the Deputy Permanent Representative of the Russian Federation Mission to the United Nations, unfortunately the positions on Afghanistan are still very far apart from each other, and to reconcile these positions would be quite a daunting and important task. But I do believe that we can continue working with the United States on specific regional matters; Afghanistan is one of them, but we can talk about the Iranian nuclear portfolio, we can talk about the Arctic region, we can talk about North Korea. And definitely this is something in which Russia and the United States and China might find, if not common interests, at least overlapping interests.

The next couple of months will be critical, and they will show us whether we can work together on issues of global commons, like nuclear nonproliferation and climate change. Also, I think that it’s not too late to start some kind of fruitful cooperation on the COVID-19 pandemic; at least in terms of mutual recognition of vaccines and assisting the Global South with the production and distribution of vaccines to the poorest populations. It is doable; however, it will not change the primarily adversarial nature of the U.S.-Russian relations. I think that these relations will continue to be quite tense in years to come. I do not foresee a dramatic change in this relationship at least until 2024, where we might observe a generational change in U.S. politics with different people coming to the White House and also to Capitol Hill.

Let me conclude my short presentation by going back to Friedrich Schiller. I think it is critically important for contemporary leaders to go beyond their day-to-day institutional interests, beyond their immediate constituencies or stakeholders, to think not in terms of narrowly defined national interests of their respective countries, but rather in terms of global commons. I understand that that might sound naïve and not very practical, but that’s the only way we can assure the survivability of our species. Otherwise, I’m afraid we’re moving in the direction of an epic disaster with unpredictable consequences. Thank you.