The Survival of Our World Depends on
Whether the U.S. and China Can Get Along

This is the edited transcript of the presentation delivered by Dr. George Koo to Panel 1, “Can a Strategic Crisis Between the Major Powers Be Avoided?” of the Schiller Institute’s Nov. 13-14 Conference, “All Moral Resources of Humanity Have To Be Called Up: Mankind Must Be the Immortal Species!” Dr. Koo is the Chairman of the Burlingame Foundation, named after Anson Burlingame, who was Abraham Lincoln’s ambassador to China from 1861. He is a retired international business consultant as well. Subheads have been added. 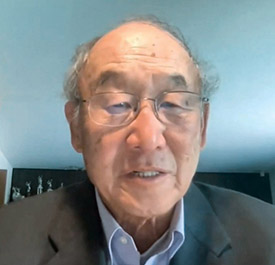 I appreciate the opportunity to participate in this very important conference, and I want to thank the Schiller Institute for putting this together.

My topic reflects my concern: I’m very worried about the conflict that’s developing between the U.S. and China, and I think the survival of our world depends on the two countries getting along.

The most frequently heard accusations the United States has been levying on China can be enumerated in the following way. First, our Congress people, senators, congressmen, used to accuse China of currency manipulation—which is kind of absurd, because China pegged the exchange rate to the dollar, and the reason the manipulation occurs, is because we have deliberately weakened the dollar. Now, we have also, especially during the Trump presidency, accused China of unfair trade practices, and therefore we levied tariffs on Chinese goods. This hasn’t done anything to restore the trade deficit. It has, in fact, created inflation in the cost of living for the American people. It did not make sense from a basic economic point of view.

We also accused China of stealing intellectual property. Well, in the very early days of the formation, when China started to open up to the West, they did require forming joint ventures for foreign companies wishing to enter into China, and they encouraged the investment of technology and proprietary technology as part of their equity investment, as much as 25% of the equity. So, in that sense, China was able to bring in technology, but that was at a time when China was very backward, very poor, and they needed to figure out how to invest and bring in Western technology. Not very different from when, in the early American colonial days, when they were so far behind the British industrial revolution, that Alexander Hamilton, in fact, specifically sent American people to London, to steal trade secrets. But that’s a long time ago!

It’s an exaggeration by the politicians in Washington, to say that China has been “stealing” hundreds of billions worth of technology from the United States. In point of fact, China has been now developing their own proprietary technology, and in many areas, they have now surpassed the American state of know-how. And so, it’s kind of absurd to say that a company like Huawei, for example, is stealing technology that the United States never had!

And fourth, a favorite accusation, is that China is accused of human rights abuses. Well, how can you practice rampant human rights abuses when you take 850 million out of poverty? China has repeatedly shown that they care about the livelihood of every citizen inside China, and based on their Belt and Road Initiative around the world, they show they care about the livelihood of everybody around the world. This is in very distinct contrast to the United States’ promotion of democracy and individual freedom, and wherever they go, death and destruction followed: Such as, and most recently of course, is the end of the forever war in Afghanistan.

China is also accused of being a threat to U.S. national security, and as a result ethnic Chinese-Americans working in the science and technology field in the United States, are harassed by the FBI, arrested without due process, their careers and livelihoods destroyed, and then—without any apology or offer of compensation, the Department of Justice frequently then drops all the charges, and leaves these people to dangle on their own.

Another way of dealing with China as a “threat” to national security, is our so-called freedom of navigation in the South China Sea. We are threatening China by patrolling around the shores; in the earlier days, we’d fly on the Chinese airspace to spy on what’s going on, and yet, we accuse them of being a threat! Especially when we make a provocation and then they respond, and then we say, “See? Their response is a provocation.”

The most important accusation of national security is how we are pushing the line in Taiwan. Especially, when Pompeo was Secretary of State and continued by the current Biden administration. We seem to have failed to honor and recognize the Shanghai Communiqué entered [into in 1972] when Nixon visited China, recognizing that Taiwan has always been part of China. What we are doing is encouraging the Taipei government headed by the DPP [Democratic Progressive Party] into thinking the Americans will come to their aid, if they should push too far, and this is a third rail that will put all of our security—the whole world’s security—at risk.

When all is said and done—and by the way, we also say that China cannot be trusted, because they’re not like a “Western democracy.” Well! You know, if the United States is a model of “Western democracy,” we are setting a terrible example: A recent Pew Research Center survey showed approximately 80% of the nations surveyed, like UK, Germany, France, so on and so forth, 80% of the people believe the United States is no longer a worthy model of democracy. And that 80% figure also includes people of United States: That just shows how far the U.S. has strayed.

The real reason China is considered an adversary and threat, is because the Chinese economy threatens to overtake the U.S., and that seemed something the people in Washington can’t stand.

In terms of the Belt and Road, China has qualified itself because of all the infrastructure investment that made sense. They built bridges, they built highways, they built high-speed rail; now they’re taking their expertise to the rest of the world, and offering it to help the other countries. One simple example should illustrate how effective they have been: In Hanoi, they built a metro system, elevated, in seven years’ time. It was 13.5 km, 12 stations, completed in seven years and it’s now operating. Japan also bid on a metro line: They started, and it has been operating for nine years, still not complete—87% complete, and the cost overrun has cancelled the low-cost financing that Japan offered in the first place.

So I have to ask: Is China qualified to benefit the rest of the world? Can the U.S., with the recent Belt and Road Initiative providing as it is now, can they provide a competitive type of offer? Maybe so, maybe not. In any case, a Belt and Road type of initiative should not be win-lose. It should be a win-win for everybody.

So. Where are the two countries going at this point? Well, the United States is threatening to cut China off on access to any American technology. Denying semiconductors to Huawei, is probably the most obvious example. This will force China to go their own way, and with their resources and their motivation, sooner or later, they will be able to develop their own, indigenous technology. And that is a lose-lose outcome. Because companies like TSMC [Taiwan Semiconductor Manufacturing Company], for example, will lose a good size of their market to China, and China will be able to build their own. Both markets will be smaller than the whole, and that’s a losing outcome.

The other difference is, because China is a one-party system, once they have consensus, they get things done. They move quickly. The United States, especially the most recent three administrations, from Obama to Trump to Biden, they have been very good at kicking the can down the road. No politician wants to state the obvious, and talk about common goals, common interests. They are always out to snipe on the other country.

Stop the Cold War, Work Together

So what we are now seeing, is that the world is moving away from the hegemony of the United States, and looking to develop a multipolar world. And the United States doesn’t seem to understand and recognize that this is the trend. We seem to be spending our energy trying to push China’s head under water, rather than trying to compete on our own. In the meantime, China is focussing on the development of their technology, and developing their economy. There’s no question that China’s economy, if not already surpassing the U.S., certainly is on a purchasing power parity, and it’s inevitable with their number of people, that they will surpass the size of the U.S. economy.

I think it’s quite obvious that we need the two largest economies to collaborate and work together. There are so many global problems that need cooperation, not competition; it needs the countries thinking about win-win outcome. For example, enabling global stability and avoiding a nuclear winter. For example, controlling the refugee flow and stopping human trafficking, combatting and preventing pandemics, diverting from arming to raising human life and human dignity, united to fight global terrorism.

So, in short, I just want to emphasize that it’s important for all of us to recognize and understand, the only way for everybody to win is for the two countries to stop the cold war nonsense, and start to figure out how to work together. And picking one issue to blacken and beat up on China, and picking another issue to work together, that’s just not going to work. Thank you very much. I appreciate the opportunity.