A Message to the Young People at COP26

This is the edited transcript of the presentation delivered by Dr. Augustinus Berkhout, to Panel 3, “There Are No Limits to Growth in the Universe,” of the Schiller Institute’s Nov. 13-14 Conference, “All Moral Resources of Humanity Have To Be Called Up: Mankind Must Be the Immortal Species!” Dr. Berkhout is Emeritus Professor of Geophysics at Delft University of Technology, a Member of the Royal Netherlands Academy of Arts and Sciences, and co-founder of CLINTEL. 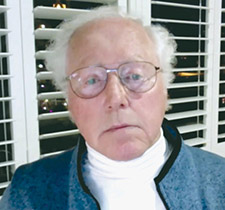 Dear audience: At COP26, filthy rich elites, arriving in Glasgow with their 400 private jets, lectured our youngsters that their parents and grandparents have caused a global climate crisis by their technological achievements. They also told our youngsters, that if they failed to stop this disastrous trend, we all will enter a catastrophe. According to them, it is five minutes to midnight, to save the planet and humanity. Net Zero must be realized immediately.

Now, how can these global elites ruin the future of an entire young generation, by poisoning them with such a fear-mongering story? And by instructing them to destroy everything that has been built by their ancestors? Are these elite, modern Don Quixotes, or are they evil idiots?

The net result is that we deal with a distressed young generation, who have a negative view of science and technology, and who believe that they have no future. Thank you, Joe Biden, Boris Johnson, Ursula von der Leyen, Jeff Bezos, Bill Gates, Mark Carney, and all the others.

Dear audience: Let us look at the seven messages of CLINTEL [Climate Intelligence] to our unfortunate kids.

Message No. 1: Please, don’t act like a parrot. Be critical against the many false prophets who are trying to take advantage of you and set you up against the impressive progress your parents and grandparents have realized. Bear in mind, that the information these prophets tell you is one-sided and misleading. Their information comes from faulty science and wrong model predictions.

Message No. 2: Deepen your knowledge on the facts of our climate. By doing so, you will discover that there is no evidence that points to a climate crisis. Yes, climate change exists, and it is of all times. But don’t worry, the current global warming is gentle—only about 0.14° C per decade. And don’t forget, it has already made many, many positive contributions to the quality of life.

Message No. 3: Do you know that the difference between the mean annual temperature in cold Finland and warm Singapore is more than 20° C? Hear it: 20° C. Yet, both these countries are most successful. Mankind is really clever in adapting to very different climates. Declaring current global warming of 0.14° C per decade a catastrophe is totally out of proportion. Think about that, while you are protesting.

Message No. 4: Did your teachers ever tell you that CO2 is a blessing for everything that lives on our planet? Far from being pollution, CO2 is the molecule of life, providing food for plants. And without plants there would be very little animal life and no human life at all. Think about that as well, while you are protesting. 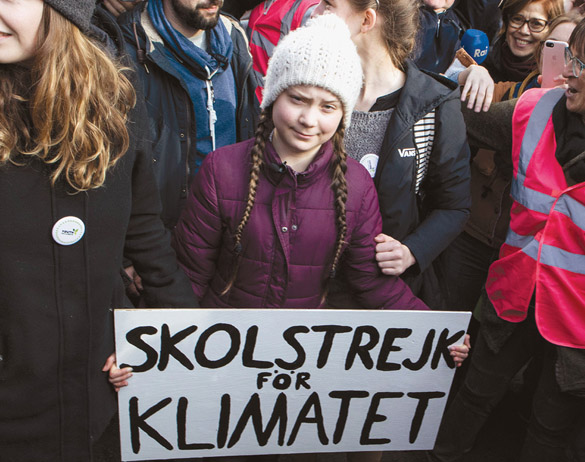 Rather than waste your life following those who ask you to solve problems that don’t exist, put all your energy into developing a productive, sustainable economy. Only then can you increase the standard of living beyond basic needs and control your future. Shown: Pied piper Greta Thunberg (center) whose sign reads, “School Strike for the Climate.”

Message No. 6: Please, don’t waste your life by solving a problem that does not exist. Instead, put all your talents and energy in developing a productive, sustainable economy. Only then can you realize enough financial means to increase the standard of living beyond the basic needs. When you go back to the unproductive past and make yourself poor, you should be aware that you are no longer in control of your own future!

Message No. 7: History shows that living on planet Earth requires adaptation all the time. If you continue to advance science and technology, you generate new capabilities to adapt to climate change, to protect our natural environment, to end hunger and poverty, and to create a society where people take care of one another. Intelligent adaptation is the formula for creating a better world.

Dear youngsters: Why protest against a problem that doesn’t exist? Just adapt! If you have more CO2, it enables future generations to finally solve the global hunger problem. And be aware that COP26 has become a failure, a total failure, because renewables are a big mistake! I repeat: Renewables are a big mistake. They are unreliable, and they are unaffordable. The true energy future is the powerful combination of gas and nuclear.

Finally, dear youngsters: For all of you who have been poisoned by fear of the future, forget the dodgy creatures of doom and gloom at COP26. They ruin your future by destroying everything your parents and grandparents have built. Don’t look at the faulty computer models, but look at the facts.

CLINTEL believes in your capability to make a better world. Consider the seven challenges in this message as your mission in life.