This is the edited transcript of the presentation delivered by Kelvin Kemm to Panel 3, “There Are No Limits to Growth in the Universe,” of the Schiller Institute’s Nov. 13-14 Conference, “All Moral Resources of Humanity Have To Be Called Up: Mankind Must Be the Immortal Species!” Dr. Kemm is a nuclear physicist and the former Chairman of the South African Nuclear Energy Corporation. Subheads have been added. 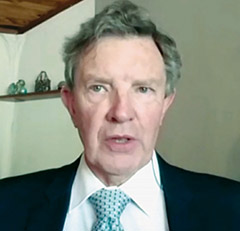 Africa is huge. It is completely different from Europe. When looking at solutions of anything that works in Europe, it doesn’t mean they’re going to work in Africa. Put that thought aside for a moment.

Let us have a look at this climate story. This whole climate thing, ask yourself, is it true? Is this really happening? We hear all the time, “Oh, scientists say... Scientists say...” But by far the majority of the people that I come across who are prepared to say the “scientists say” have found their information out of a popular magazine, out of a newspaper, or off TV—virtually nobody has read an actual scientific article.

So, what is going on: Is this true? Let us have a quick look. Has there been warming? The answer is, yes! There has been warming, about 1°C since the time that Abraham Lincoln was President of the United States. Is this linked to carbon dioxide? The answer is, probably no, it’s exceedingly doubtful. Certainly, if you go back to the time when the Earth was born, when it was a molten lump of lava and everything came about in time, carbon dioxide developed in such a way that it held heat in from the Sun—that’s absolutely true. As a result the world became warm enough to sustain human life. And has been the case now for a long, long time, and as a result all life developed. Had there been no greenhouse effect, life probably never would have evolved at all: So, thank heavens that there is a greenhouse effect.

So now we say: Is it the case that the extra carbon dioxide that industry has put into the atmosphere since the time of Abraham Lincoln, which is about the same time as the Crimean War, can that be the issue? The answer is almost certainly no! Even is there an enhanced global warming? Is there more global warming taking place taking place now, than there was, say, a century ago, or whatever? The answer is probably not really, not much. And, is it the result of human activity? The answer is, no! The human activity is so negligible that it really is pushing the limits of believability to think that that is what is causing supposedly this climate change thing.

So now, we say, is there is a climate crisis? The answer is, absolutely no! There’s no crisis that we have to react to next week and the month after, and so on. So then, people say to me, at social events: “But the scientists say....” And you say, “Where have you heard that from?” Then you say, “Have you heard any opposing views?” “Well, not really, you see. I hear a few deniers here and there.” The word “deniers” is taken like from the Spanish Inquisition, where anybody who stepped out of line was hammered by the authorities.

Where are the opponents given an opportunity to talk? The answer is, largely they’re suppressed by the media. They are victimized, they’re hounded, and I’m not joking! I know of prominent, credible scientists that have been forced to leave their jobs, they’ve been hounded out of events and so on, because they dared to say, “Maybe this is not true. Maybe there’s more to this than we see going on.”

What happens? We get this COP26 that takes place in Glasgow, just a few days ago: Quite frankly, what came out of COP26 is a lot of hot air—excuse the pun—but here we have 400 private jets flying into Glasgow, so those people can meet to tell me why I mustn’t fly in airplanes if I can possibly help it, and why you mustn’t drive a big motor car, and such like.

Something Positive from COP26?

Now, I was very pleased to see President Emmanuel Macron of France a few days ago announcing that he intends to push for more nuclear and that he intends to initiate a small modular [nuclear reactor] program there, as well. In fact, a number of world leaders have said that, recently—that nuclear is the answer. It’s one of the positive things that came out COP26.

And people sat down, and looked at the reality. Can the world actually run on wind and solar power, and batteries and hydrogen, and so on? The batteries and hydrogen are brought about because the wind is so variable and there’s no sunlight at night, so you must somehow store that wind and solar energy somewhere, so that you can use it in the dark and when the winds aren’t blowing.

You can’t come up with batteries, so you come up with hydrogen, and so on. But to be able to store the amount of energy you want, you’ve got to have a much bigger system than you started, not just double or triple—even bigger than that. So you’ve got to have massive wind turbine farms, massive solar arrays, and so on and so forth. And solar can be damaged with high winds and hail and all sorts of other things. So it’s not at all secure; it’s not this magic bullet that’s been projected in the media to such a degree, but then when somebody stands up and says, “But nuclear’s an option” they get hammered and they get hate mail, and so on.

So a number of people, and newspapers and magazines and so on, just before COP26 and then after COP26 have said, when you sit down and carefully look at reality and actually become realistic, you discover that we cannot run the world on wind and solar.

Bear in mind that wind and solar came about because of the climate argument, that the climate was a result of carbon dioxide. But in fact, basic physics tells you, that it’s quite likely the other way around: that the temperature goes up first, and then, in fact, the carbon dioxide comes afterwards, and not how you’ve been taught.

And why might the temperature rise? The answer is: the solar cycle. If you look at the Sun, you will find the Sun goes through regular cycles. There’s an 11-year cycle, where the Sun goes from a minimum to a maximum. It goes up and down like this. The heat from the Sun is not enough to warm the planet to the degree required, so often people want to shoot down that argument, saying, “No, no, the Sun doesn’t get hot enough to make the Earth hot.”

It’s also well known that with more CO2, plants will grow wonderfully. There’s an absolute measured increase in greenness on the planet, in the sense that much more green stuff has been growing over the last number of years as a result of increased CO2.

If you also look back in history, you will find there were previous global warming periods: The Medieval Warm Period, you can look it up in the history records. The Roman Warming, the Minoan Warming, exactly the same sort of thing that has happened recently. They were followed by super-cold periods, in sync with the Sun. During the time of Shakespeare, which is about the time that the Pilgrim fathers arrived in the United States, there was what was known as the Little Ice Age, that plunged into super-cold temperatures. The River Thames froze over to the degree that an elephant actually walked across the Thames, and horse-drawn coaches used to ride down the Thames. It was since then that there’s been another warming, that has resulted in this, up to now, 1° rise, from the middle 1600s through to when warming started to become evident as against the cool period, which was at the time of Abraham Lincoln.

Be Honest About Science

So why do people want to blame warming on industry, on man-made, known as anthropogenic carbon dioxide? The answer is, it’s quite likely wrong. So this ridiculous panic that’s setting in, screaming “climate crisis is on”; numbers of politicians, just to get attention, it comes up at COP26, which results in more colonial-style bullying, telling us what to do, at the expense of the growth of our country and the growth of our people and the rest of Africa and other parts of the world—you cannot do that! This is wrong! You’ve got to be much more honest with yourself, to find out what is the actual truth. What is really happening?

My feeling is, that this whole climate thing is probably wrong. There has been some warming; yes, it’s probably linked to the solar cycle; it’s probably beneficial. It’s not a problem. It’ll be just like what happened in the past, not cause harm. In fact, if you look back historically, the warming periods, like the Medieval Warm Period, the Roman Warming and so on, all coincided with periods of health, welfare and growth in the countries of the world. It was the cold periods, when the potatoes failed in Ireland, causing many Irish to go to what is now the United States. It was the cold periods when famine broke out and disease broke out. So, it was the cold periods, which is logical, that’s when the rains came, and it was dark and cold and so on, so cold is associated with famine and disease and so on; and warmth has been associated with health and welfare.

So we really shouldn’t be panicking, and forcing the vulnerable countries of the world to toe the line of some mythical image that has been created in Europe and elsewhere. Let’s be realistic; let’s have a look at this thing, and say, let’s be honest, and let’s help all of mankind to progress and benefit in a spirit of collaboration.