Earthquake Forecasting at the Frontiers of Science

This is the edited transcript of the presentation delivered by Sergey Pulinets, to Panel 3, “There Are No Limits to Growth in the Universe,” of the Schiller Institute’s Nov. 13-14 Conference, “All Moral Resources of Humanity Have To Be Called Up: Mankind Must Be the Immortal Species!” Prof. Pulinets is a principal scientific researcher at the Space Research Institute of the Russian Academy of Sciences in Moscow. Subheads have been added. Four of his 20 images are incorporated into this print edition of his speech. 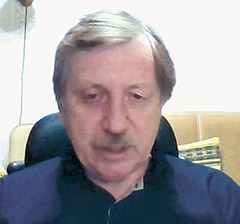 Hello to everybody! Thanks to the organizers for inviting me. I have had connections with the Schiller movement for more than 10 years and have participated in some of your conferences. We are now at a very important moment when we should think about the major problems of humanity, and one of these problems is earthquake prediction.

Why, for more than 100 years, can science not resolve this problem? I will try to explain to you what is happening now.

The traditional presentation on how earthquakes are generated is called seismogenesis. The classical view is that we have the continuous movement of the tectonic plates which are colliding or move in different directions, which creates the compression, stretching, deformation. And when this deformation reaches the limits of stress resistance, we have a rupture, which is called an earthquake.

There are several relative movements of the tectonic blocks referred to as active faults. There are several types of such fault activity: normal faulting, reverse faulting, and strike-slip faulting; for example, what you have in California, is plates that move horizontally, a strike-slip.

And the idea of earthquake prediction in the 1970s, or the last century, was that when you store the stress and come to the limit, then after that, again you store and repeat it and repeat it, and you can calculate this time, and predict the earthquakes.

There were physical models, physical presentations of how that works. The period between the previous and next earthquake was divided into several stages. When the small irregularities form, the stresses increase, and we come to the stage when we have disruptions of the crust. And this is the final stage of the earthquake preparation.

There were developed together in the United States and the Soviet Union, the models which demonstrated different physical parameters, which have their dynamics during the phase of the earthquake preparations, such as radon release, the level of groundwater, electrical resistivity, and the velocity of seismic waves. Seismologists were optimistic that they would be able to predict earthquakes. One of the examples was the [earthquake prediction] experiment in Parkfield, California where earthquakes happened every 30 or so years, for more than a century. The next earthquake was expected in 1993 and it did not happen. It happened more than 10 years later on Sept. 28, 2004. This case was accepted by seismologists as a tragedy. They decided that all the precursors cannot work.

And finally, in March 1997, the paper, “Earthquakes Cannot Be Predicted,” was published. This was by four seismologists, Robert J. Geller, David D. Jackson, Yan Y. Kagan, and Francesco Mulargia. They asserted that as obvious ideas have been tried and rejected for over 100 years, so it is not necessary to work further for predictions, that short-term prediction is impossible.

This was founded with the publication of the book, How Nature Works by Per Bak, which became the bible of seismology. It says that we are in chaos, and every irregularity in a region can develop into a future earthquake, and that we cannot say what kind and where this irregularity is, and therefore, we cannot predict earthquakes. This process is called by Bak, “self-organized criticality.” He says that nature self-organizes, but we don’t know how it happens, and we cannot predict earthquakes.

What is the modern state of seismology now?

There exist the long-term and medium-term predictions which are based only on the seismic catalogues. So, seismology has left behind the old physics and is now using only statistics. The physicists in seismology were replaced by mathematicians, who calculate the possibility, the probability of future earthquakes, using the catalogues and history of previous earthquakes to estimate the probability of earthquakes in the next few years and next few months. But what will happen in the next few days, what we name “short-term prediction,” is not used in seismology now.

And in this stage, it looks like giving you the diagnostic of your health by the heart-rate measured in your wrist. That’s all. 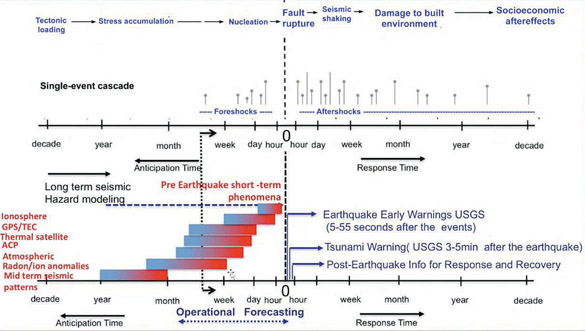 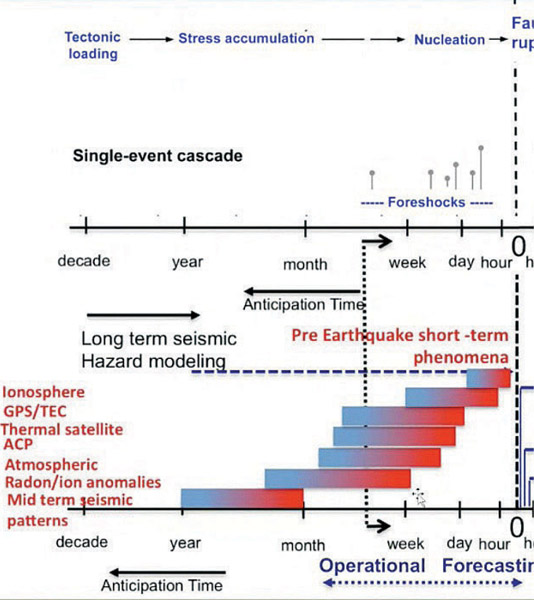 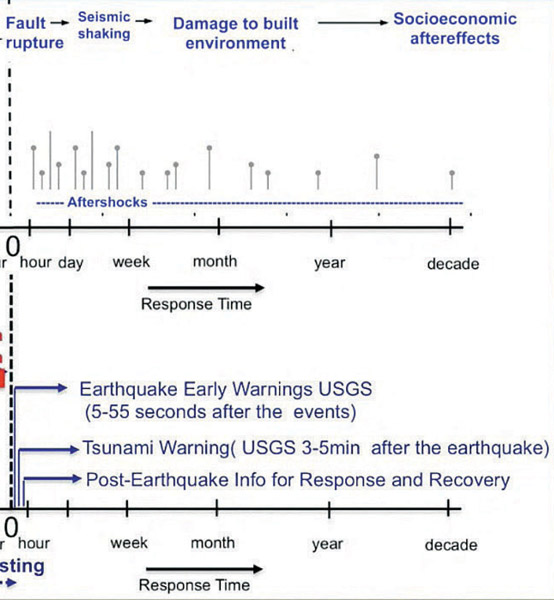 But we have many other things, and step by step, the physicists, the majority of whom are not seismologists, started to look at how this process develops and what happens in the last stage, when short-term precursors are generated. We developed a physical model which can explain the many kinds of atmospheric and ionospheric anomalies that appear, not underground, but in the atmosphere and ionosphere, and can be monitored by satellite-based remote sensing. See Figure 1.

The history of these studies has been very long, with the first publication of our models starting in 1991. Almost 30 years have passed, since we came to the conclusion that we are able to predict earthquakes.

[Prof. Pulinets presented a screen image identifying many aspects of the physical model, e.g., air temperature growth, air pressure drop, atmospheric electric field growth, as well as a schematic of how measurements are made. He refers to this as a System for Pre-Earthquake Signals Detection, Utilization, and Alerts.]

To reach conclusions about the possibility of earthquakes, we need monitoring using satellite and ground-based measurements. 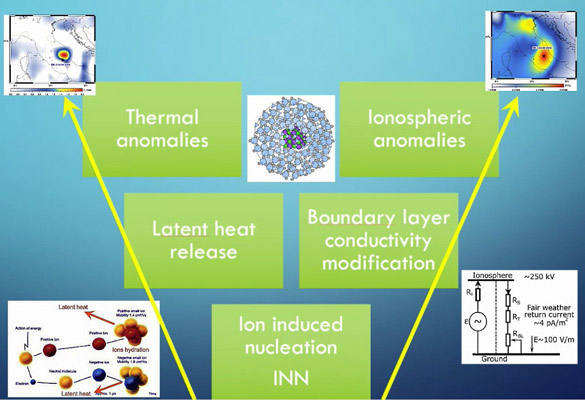 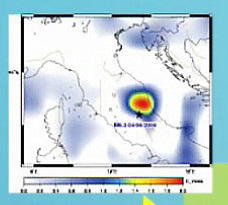 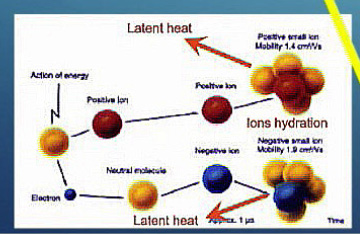 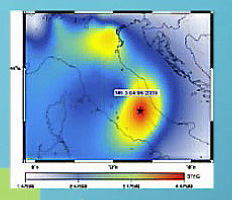 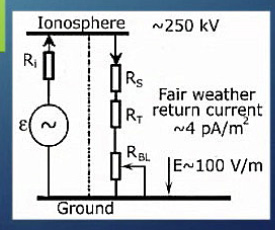 Very simply, there are two measurable precursors which could be used for short-term prediction: thermal, and electromagnetic (mainly ionospheric) precursors, from which we measure the heat. Before an earthquake in active tectonic faults, radon is released. Newly formed ions are a very good center for condensation of water vapor, which is always is in the air, and so with the condensation of ions, and water release, there is “latent heat.” These fluxes of latent heat are huge. The effectiveness of this process is 10 to the 10th power, you can compare it with a nuclear explosion. See Figure 2, which illustrates “ion induced nucleation” (INN) and the consequences of that atmospheric process, which can be measured.

[For the interested reader, a 16-page heavily illustrated report, of which Prof. Pulinets is one of the authors, on the subject of thermal prediction, “Thermal radiation effects in the atmosphere initiated by pre-earthquake processes,” is available here.]

I will give you examples of these precursors using the lateral earthquake as an example.

First, we can monitor the size of the area of the earthquake still to come, from space. In Arquata, Italy, we measured thermal anomalies in the area of the earthquake beforehand. We could determine the magnitude of a future earthquake. Then the heat goes up. We saw it in the atmosphere, in the middle atmosphere, in the top of the clouds, and in the ionosphere. The heating of the ionosphere is very interesting. The appearance of the precursors looks like stalactites and stalagmites, and these precursors appear in a fixed time period, about one to ten days before the earthquake. So, by using these precursors, we can estimate the timing of the earthquake; using the size of the anomaly occupying the area, we can estimate the magnitude, and find the position of the epicenter.

All these processes occur before an earthquake develops exponentially and they are concentrated in a short period. We can detect this process from the acceleration of different precursors and their development. When graphed, we map the ionospheric precursor with the vertical axis being the local time of day, and the horizontal axis the number of days. So, if during the nighttime, after the sunset, it were to appear as a positive anomaly that lasts through the night to sunrise, this is a positive anomaly, a very stable precursor, which indicates an approaching earthquake.

And the stability of these precursors can be demonstrated by two examples. Two earthquakes with the same magnitude, 7.1, happened at a distance of 20 years: The first was the Hector Mine earthquake, and the second was the Ridgecrest earthquake, which happened more or less in the same area of California. And yet it is notable that the nighttime positive anomalies in the ionosphere were registered, and they were very similar for Hector Mine and for Ridgecrest. So, this is a stable precursor which can be registered regularly. 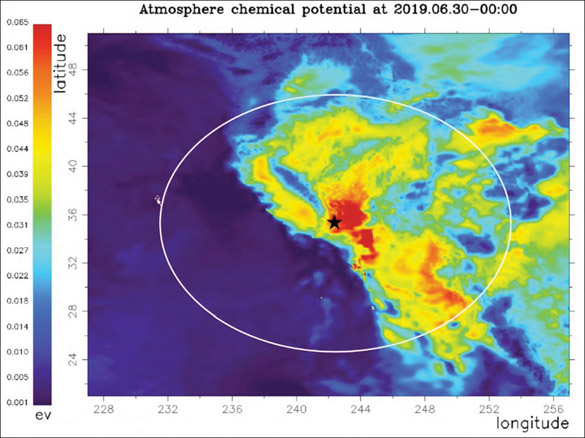 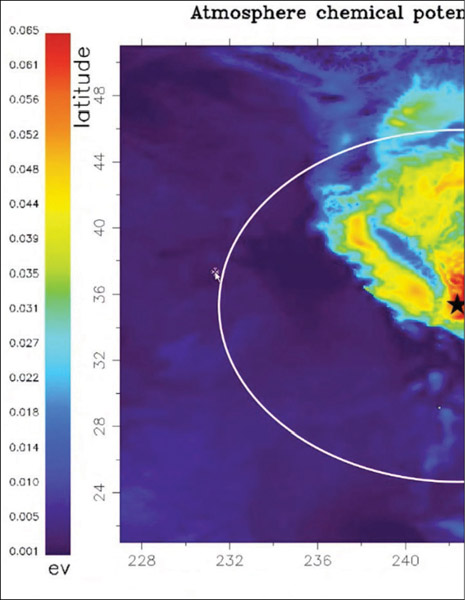 We examined another California earthquake, in June 2020, with a magnitude 5.5. We were able to measure and map how different precursors were concentrated close to the time of the earthquake. Therefore, we could see the acceleration of the process. There are similar examples from Nepal, with one earthquake on April 25, 2015 and the second one on May 5, 2015. Both had magnitudes more than 7.

Our “Semi-Automatic Precursors Identification” permits us to organize the automatic identification of the precursors, using the set of the parameters which we get from remote sensing. By this processing, we can automatically identify the precursors and make a short-term forecast.

[More information and the chart of the semi-automatic process shown on the screen is available in a 15-page paper, “Principles of Organizing Earthquake Forecasting Based on Multiparameter Sensor-WEB Monitoring Data” available here .] 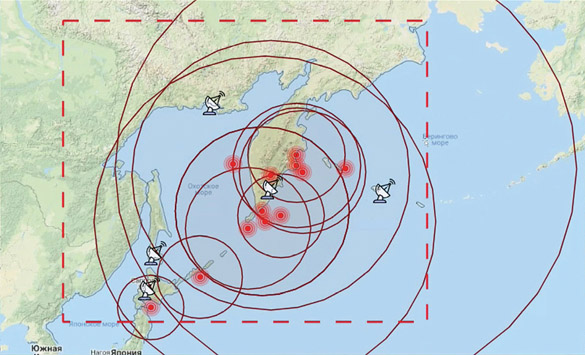 In a close-up of the larger map of the area [not shown], you can see one circle which represents the automatic detection. The second circle has been detected by an operator looking at data. We can see the very close position of the epicenter detected automatically, and the real position of epicenter of the earthquake on the thermal imaging map.

I will finish with the conclusions:

• Seismic-tectonic processes work as an open, non-equilibrium system with dissipation, which is described by a synergetic approach.

• We have observed the explosive growth of some parameters’ magnitude (it’s called the exacerbation model) and precursor’s acceleration; we observed this for all types of earthquakes.

• The physical LAIC [Lithosphere-Atmosphere-Ionosphere Coupling] model created provides a comprehensive explanation of the generation of processes of the precursors. We understand what is happening. We don’t register some things that we do not understand—the level of the water—things like that. For all the precursors we register, we have an explication of the physical mechanism by which they are generated.

• We urgently need to turn seismology’s face to physics and work together.

Many of the things we are demonstrating now are not fully accepted by seismologists. They also neglect almost everything that was done by their fathers and grandfathers, as you heard in a previous presentation on this panel. We should turn them back to physics, to see that it is not only underground processes but also the atmosphere and near-Earth environment that provide signals to us, and give us information on future earthquakes.

We have already created the applications that can give us real predictions. And with official implementation, it will give an opportunity to solve one of the main problems of mankind—realizing short-term earthquake forecasting.

Thank you very much for your attention, and I am open for questions.