This is the edited transcript of the presentation delivered by Prof. Carl-Otto Weiss to Panel 3, “There Are No Limits to Growth in the Universe,” of the Schiller Institute’s Nov. 13-14 Conference, “All Moral Resources of Humanity Have To Be Called Up: Mankind Must Be the Immortal Species!” Prof. Weiss is the former Director and Professor at the Institute of Metrology in Braunschweig, Germany. Subheads have been added. 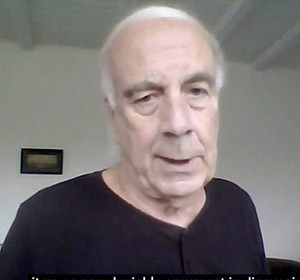 First, I would like to thank the organizers of the meeting to give me an opportunity to give my view on this phenomenon which is called sustainability, which is much cited these days.

What we hear every day from the media is that raw materials are finite; already in May we have exceeded the limits for consumption for this year; we have only one Earth; the limits of growth; the climate catastrophe; and followed by the pandemic, etc., etc. This is the sound of all media, day after day, and all seem to believe it and hold it up as non-deniable arguments in discussion: We cannot continue like this. We have to cut back on our consumption, develop a sustainable life mode. If not, the Earth will be burning and the end of humankind is threatening.

Already in 1990, our then [German] Minister of Environment Angela Merkel decreed: “If we do not reduce immediately and sharply our CO2 emissions, the Earth will be uninhabitable by 2020.” As we all know, the CO2 emissions have grown since then exponentially.

How is this sustainable lifestyle to be practiced? The politicians are increasingly clear about this. They say that without massive, painful limitations of our living standards, it will not be possible. And the economists find the planned Green Deal of the European Union will not be feasible without an eco-dictatorship. But the question is, is this historical claim going back to Malthus, again and again maintained—and always falsified by reality—is it correct at all?

“The Stone Age did not end because of a shortage of stones,” stated Saudi Oil Minister [Sheikh Ahmed Zaki] Yamani. Why did it end? Because something better had been invented! In this case an artificial alloy of copper and tin—which is called bronze—had shown itself to be much better suited for making tools, etc.—much better suited than the good old stone material.

Four billion years ago, cyano algae developed as the first primitive form of life. For their survival and self-replication they converted CO2, of which the atmosphere largely consisted then, largely, to carbohydrates and to oxygen, as do all plants. Two billion years ago, most of the CO2 was used up. What would have happened if a sustainability advocate would have been present? One would have concluded: “The resources for our life are limited. Moreover, the oxygen produced is poisonous for the algae; chemically it is similar to chlorine, which is known to be poisonous. Consequently, we have to reduce our consumption so that at least a small fraction of our species can survive.” That would have been the view of a sustainability advocate.

But what happened in reality? A new species surfaced which consumes the poisonous oxygen and converts it to CO2! Flora was joined by fauna, and a wonderful circle came into being. Flora converts CO2 and sunlight into carbohydrates and oxygen, which constitutes the food for fauna, which burns the carbohydrates with the oxygen, thus providing again the food for flora. In this way, a never-ending circle was established which guarantees the survival of flora and fauna infinitely, and without any limitation. So, this “shortage catastrophe” which could be expected for the algae did not happen because again something better had been invented.

Even after this however, the life elixir “energy” was limited to the availability of plant carbohydrates. Small amounts of energy were provided by wind and water, and these were the limits of “natural” resources. This came to change only about two centuries ago as it was discovered that fire can accomplish human labor; for instance, by the steam engine. The following further development of machine-engine techniques led then to an unheard-of increase of the standard of living and an increase of the populations. While before industrialization, 90% of the population lived on the edge of starvation, after industrialization only about 10% of the then much-increased population suffer from hunger today. This invention again was no reaction to some scarcity or shortage: To the previous mode of work, another, better one, had been invented again.

Presently our energy supply is based on coal, gas, and oil, which for a long time will reach no limits. The institution which is charged in Germany with monitoring the energy resources—which is BGR in Hanover, Germany—states [it to be] “a comfortable situation.” The known reserves will last for more than 1,000 years, while 90% of presumed resources have not even been investigated.

The Club of Rome predicted during the 1960s, based on its model calculations, by 2030 a complete exhaustion of all carbon sources—that means coal, gas, and oil. I should mention this: Ironically, they proved with this that a climate catastrophe due to CO2 will never occur! [laughs]

In reality, now the known reserves are larger today than in the 1960s. Even though there is no shortage of energy now, the next “better” is already a reality. Namely, the access to the energy stored in nuclei. With this, energy for millions of years is available by nuclear fission alone, not to talk about nuclear fusion. But other problems also become solvable, for instance, energy storage. Current energy storage—for instance in batteries—relies on the energies stored in the electron shell of atoms. The corresponding energies stored in the nuclei are a billion times larger. The energy for moving a car during its lifetime could then be stored in a matchbox.

The supply of raw materials is also not finite. They can always be recycled. They correspond to chemical catalysts, which facilitate the process, but are never used up in the process. Of course, recycling requires energy, but there is apparently no shortage of that.

If I speculate about future inventions: Who says that in a foreseeable future our food could not be synthesized from water, CO2, and a few trace elements, eliminating the need to kill animals for our survival? The most powerful supply of energy might come from annihilation of matter with anti-matter, although at present, the current view is that a symmetry-breaking in the early universe has destroyed all anti-matter. But it has never been considered that domains of anti-matter could have isolated themselves in a soliton-like fashion. Thus, again, such a speculative thing might not be impossible.

Negligible Effect of CO2 on Climate

OK, so we understand that shortages and the Malthusian idea of scarcity are not really reality, but then comes another objection from the sustainability advocates: The climate crisis due to CO2 and all the other publicized dangers and crises. [They say] that will necessitate the impoverishment and reduction of the populations.

On the contrary, every person familiar with the scientific literature knows—more than 2,500 research works have been published which show—based on measurements, that the role of CO2 for the climate is small and negligible. Zero works [publications], on the other hand, exist, which can prove by measurements any essential influence of CO2 on Earth’s climate. Earth’s climate is determined, by-and-large, by the three principal solar activity cycles. The climate crisis is a media creation, based on the certainty that the average citizen will not read the scientific literature. All other alleged dangers are equally media creations.

In short, the claim of necessity to reduce living standards has no basis. A closer look reveals that this claim intends to impoverish and reduce the populations to a remnant of gene-manipulated labor slaves, and to stop any technical progress, because that might endanger the rule of the often-cited “0.1%,” who intend to create a steady state of society which would guarantee their eternal rule.

‘Sustainability’: A Concept Foreign to Life

The concept of sustainability is foreign to organic life. The inexhaustible resource of human inventiveness is the means to guarantee a material paradise even for growing populations.

As an illustration, I would like to cite a few lines from the novel by Uwe Timm titled, Halbschatten—which means half-shadow—which is about the life of a German pioneering woman aviator. The text goes like this:

[T]he propeller, this highly complicated, complex form, perfect in itself, is the wonderful discovery which, together with the engine and the wings, accomplishes the impossible: FLYING.

A visible sign that mankind can grow beyond itself. Be fruitful and master the Earth, says the Bible. The human being is not limited. Everything is open to him, the sky, the water, and the Earth.

So, nobody should let ignorant or corrupted politicians, corrupted media, and corrupted scientists tell you to live in poverty, and deny creativity and inventiveness.

So, with this appeal, I conclude my little lecture, and thank you for your attention.