Stop the Weaponization of ‘Science’

This is the edited transcript of the presentation delivered by Mike Thompson, Kansas State Senator (10th District), to Panel 3, “There Are No Limits to Growth in the Universe,” of the Schiller Institute’s Nov. 13-14 Conference, “All Moral Resources of Humanity Have To Be Called Up: Mankind Must Be the Immortal Species!” Sen. Thompson is Chairman of the Kansas Senate’s Committee on Utilities. Subheads have been added. 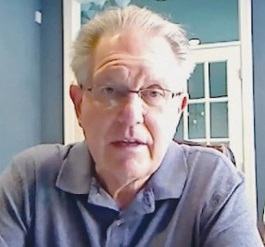 Good morning, everybody! This is morning when I’m recording this. I wish I could be there with everyone live to talk about this topic. It’s extremely important.

Unfortunately, what that does is, it continues to undermine our grid reliability, increase our electrical costs, and long-term, ensure that we’re going to have mal-investment into renewables—which truly don’t work, as you well know from the last Arctic outbreak in February, both here in Kansas and also down in Texas. It was a massive failure. The wind companies all say that [they are] the big winners; that they out-performed. But in Kansas, it dropped to almost no wind production [of electricity] at all. I’m not sure how they call that a win. And, of course, in Texas, we had hundreds of people who died, millions were out of power—some for more than a week because of the lack of renewable energy, that ERCOT [the Electric Reliability Council of Texas], the Texas grid, has become extremely reliant on, unfortunately.

I’m going to talk just a little tiny bit about the weaponization of science. That’s something I’ve been acutely aware of for quite some time. I’ll preface it by saying I long thought that by engaging with a scientific discussion with these people—who are extremely disingenuous—that we actually legitimized their “science.” That the climate is going to be at a tipping point at a certain time, and it’s going to be irreversible. Nothing could be further from the truth. This is utilizing fear, as they always do, to motivate people into action. That’s what we saw in Glasgow, Scotland, even though all these people from all over the world flew in, in their 400 jets into this place. It’s all about control; it’s all about money and power. It has nothing to do with science.

It’s something that’s been going on for a very long time. The weaponization of the term “science,” to use it as a political cudgel to motivate people into doing things, or to force them into things. Now, we really are at a tipping point for sanity in this country. We’ve got ESG standards—Environmental, Social, and Government standards—which are being imposed by financial institutions, forcing companies to invest in renewable energy, even though it does not work and it’s not Green at all.

Let me just kind of walk you through what has happened.

Back in 1997, I was invited to the White House. Al Gore had invited 100 meteorologists from around the country to listen to his presentation on carbon dioxide, and the massive amounts of CO2 that we’re pumping into the atmosphere and causing climate change. The intent of that was not really to promote science, but to promote this narrative, this so-called “science” narrative, so that the meteorologists who attended would be proselytized and return to their home markets and preach the gospel of climate change across the country. Well, it worked for most of them. I did not do it, but a lot of them did; a lot of them bought it.

That began the steady drumbeat, in 1997, of this “climate change” narrative, sound-bite science, that we’ve been utilizing for years and years. They do several things very effectively. One is to conflate climate and environment. They tell people, basically, you’re putting all this stuff into the air, and it’s going to change the climate. Well, sulfur dioxide, hydrogen sulfide, carbon monoxide—all these gases, all these different things we have been putting into the air over the course of time—can pollute the environment, but they cannot change the climate.

Fortunately, we’ve done a great job of cleaning up the environment, but it doesn’t matter if we didn’t. It would still get cold in the winter, still get hot in the summer, because our climate is driven primarily by the Sun, and not by anything in the atmosphere. In fact, carbon dioxide is beneficial. We have cleaned up the environment, and we do a very good job. They always point to China as being one of the great offenders, and they are building a lot of coal plants—about one a week—because they’re smart and they see they need energy. We’re going in the opposite direction, unfortunately.

But, putting CO2 into the atmosphere at this point does nothing. We’ve reached total saturation. CO2 does not blanket the entire Earth. In fact, if you look at a CO2 map of the Earth, you’ll see that there are pockets where there’s CO2, but there are vast expanses of the Earth where the CO2 levels are very, very low, as compared to other areas.

In addition to that, carbon dioxide does not absorb the entire infrared spectrum. It’s sort of like putting a fishnet over the Earth; it only absorbs very specific infrared radiation lines. Those lines are already absorbed; we already have enough CO2 to absorb those specific portions of the infrared spectrum, and that carbon dioxide can do. In other words, we could double, triple, or quadruple the amount of CO2 in the atmosphere right now, and it would have no impact on the temperature, no impact on the climate whatsoever.

Water vapor still is the primary driver—and always has been the primary driver—of stabilizing the temperature of this planet. It slows down the outgoing long-wave radiation just enough to give us a livable temperature on this planet. Same thing happens for carbon dioxide. And once that infrared radiation reaches a different point of entropy, it still is released back out into outer space. We don’t trap that energy; it eventually makes its way back to outer space. So, that is one thing we conflate, is climate and the environment.

We also conflate weather and climate. Weather is short-term; weather patterns are short-term. By short-term, I don’t mean just today or tomorrow. You can have weather patterns that can persist for quite some time, months on end, in fact. A lot of that is driven by ocean temperatures and how that forms the low-pressure areas and where they’re anchored. That has a huge determination on the weather pattern that you see repeated across any one area of the Earth, over time. Climate is long, long, long term. These people, like Alexandria Ocasio-Cortez, who say that we have less than 12 years to live if we don’t do something about the climate—she has no concept of what climate is. It takes thousands of years for the climate to change.

There are three specific cycles that determine how the Earth and the Sun’s relationship changes over time. Some of these cycles last for 100,000 years. One of them is the Earth’s ellipticity—how the Earth orbits around the Sun. We’re closer to not a spherical orbit right now, but we’re fairly close to it, and over time ellipticity grows. When we’re farther from the Sun, over the course of the change in that cycle, we are much farther from the Sun; we get less of the solar radiation.

So, you get a combination of the ellipticity change and solar cycles themselves changing, where you get the magnetic flux in the Sun quieting down, then you get into a situation where the Earth cools off. It’s all part of a natural cycle. The Earth’s tilt changes with time, and also which hemisphere is pointed towards the Sun during the winter and the summer also changes. Those cycles vary from 20,000 years to 100,000 years.

There’s nothing man can do about these cycles, but it is what drives the climate of this planet. That, and the internal engine of the Sun itself, the magnetic changes in the Sun; and the rotation of the larger planets in our Solar System have centrifugal force on the Sun that changes how the internal dynamics of the Sun happen. I’m not a solar physicist by any stretch of the imagination, but I understand how this all changes.

To say that carbon dioxide is the primary driver of climate change is so ignorant and so mal-informed that it just doesn’t make any sense. Unfortunately, that’s what the public has been fed over years.

Basically, a lot of what we’ve been discussing with climate change, has been the impetus for our energy change—horrible energy policy changes in the United States, away from reliable, cheap electricity, toward expensive, unreliable electricity, and we’re going to pay for it. I think the United Kingdom is already doing that. You see how the gas prices have gone up; how the coal plants are being retired. So, we are in deep, deep trouble if we don’t realize that and start fighting back.