This transcript appears in the December 10, 2021 issue of Executive Intelligence Review.

The Great Game Must Finally Come to an End

This is the edited transcript of Iliad Alexander Terra’s presentation to Panel 2, “The Science of Physical Economy” of the Schiller Institute’s November 13-14 conference, “All Moral Resources of Humanity Have To Be Called Up: Mankind Must Be the Immortal Species!” Mr. Terra, an American, is the Founder and President of the Council on Global Relations. 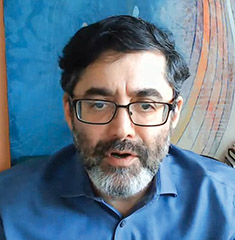 The Council on Global Relations has been involved in Afghanistan for over two decades in the capacity of supporting the Afghan people. From our perspective, what is needed is a new narrative, a narrative that states that the winning formula is peace, and that this is what we need to engage in on the road from war to peace. This is fundamental, and the time for this is now. There is, from our perspective, no excuse and no justification not to enter in this space.

The current crisis that the Afghan people are facing is quite bleak. Not only has their economy collapsed, not only are they facing multiple threats from regional influences, but they also have failed infrastructure and an institutional lack of experience. And the list goes on. We’ve all heard stories about Afghan families selling their children so that they pay for food. This is not acceptable; this is not normal in modern societies and the modern world community. We need to ask the question: Why is this happening?

To understand why we are at this point in the crossroads, we need to have a deeper memory, and look at the Afghan crisis in its historic context. Not just these past twenty years, not the past two months; not just these past forty years in which there have been constant wars and struggles in the country. But going back centuries, Afghanistan has been the subject of the so-called Great Game, torn to shreds, divided, with repeated attempts to conquer Afghanistan by various stakeholders.

Why has this formula been in play, and in force? Obviously, Afghanistan’s geopolitical location, its natural resources, and even its human capital of highly intelligent, capable, and—currently—tech-savvy population of youth. Why is it that this region has been decimated? Why is this country, and these people struggling in this way?

An honest and transparent investigation and exploration needs to be done on this and shared as a way to educate and inform policy, and inform solutions.