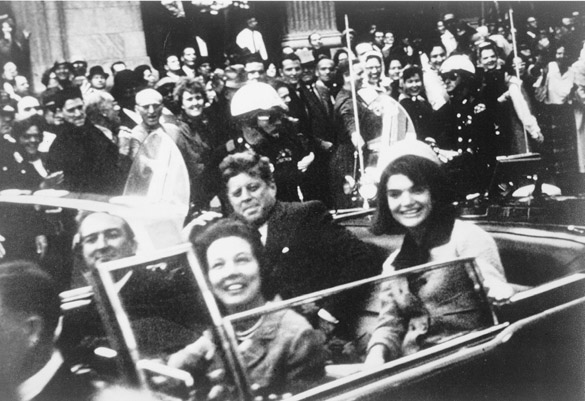 Victor Hugo King
The Kennedys, moments before the assassination in Dallas, Texas, Nov. 22, 1963.

Nov. 26—On October 22, one month before the 58th anniversary of the assassination of President John F. Kennedy, President Joe Biden issued a memo announcing a “postponement” of the public release of classified documents related to the assassination, which occurred on November 22, 1963. The reason given in the memo is “to protect against identifiable harm to military defense, intelligence operations, law enforcement or the conduct of foreign relations....” It set a new prospective date for release on December 15, 2022. The delay was attributed to the COVID pandemic, which purportedly limited the manpower available to review the documents!

This latest delay follows a previous one, announced by President Donald Trump on October 28, 2017, that the remaining documents would be publicly released in October 2021, to assure “full disclosure.” At that time (Oct. 2017), he presided over the release of nearly 35,000 files, mostly related to CIA activity surrounding the assassination and its aftermath. Of the documents released between October and December 2017, many had “significant redactions,” according to those who studied them.

Was fifty-eight years not long enough to determine what “identifiable harm” would result from full disclosure? If not, what difference would a further delay of one year make? Perhaps enough time to shred whatever evidence remains, which might implicate certain institutions in the planning and coverup of the crime? Or to hope that some who would be implicated would pass away, to avoid judgement?

During his 2016 presidential campaign, Donald Trump pledged to declassify all files, as part of his commitment to “drain the swamp.” According to “source reports,” the full release of the JFK files did not occur during the Trump presidency due to his acquiescence to “last-minute requests from national security agencies,” for more time to review the docs! It is estimated that nearly 23,000 documents remain classified, totaling more than 442,000 pages.

The release of the full files was ordered by the U.S. Congress in the 1992 President John F. Kennedy Assassination Records Act, which mandated that all records related to the assassination “should be eventually released.” The vagueness of this language has provided wiggle room for all subsequent presidents, none of which has acted decisively to provide closure about the assassination. The official story, compiled by the Warren Commission, that Lee Harvey Oswald acted alone to kill JFK, was not accepted by more than 51% of those polled immediately after its release, in October 1964. Recent polls show that between 64% and 70% of Americans do not accept the conclusions of that report today. 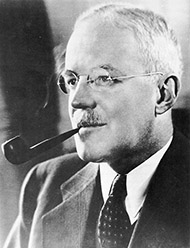 Who Were JFK’s Enemies?

The assassination marked a turning point in American history, away from the scientific and technological optimism which characterized the post-World War II period in America, which had been strengthened by initiatives taken during Kennedy’s short time as President. Many of these initiatives were reversed following his death, including his full commitment to exploring new frontiers in space; seeking a dialogue with the Soviet Union; pulling back from military engagement in Vietnam; his support for decolonization in the developing sector, in the tradition of the anti-colonialism of the U.S. Founding Fathers and President Franklin Roosevelt; and an effort to limit the power of the Federal Reserve, by a June 1963 Executive Order issuing Treasury bonds, to create credit for upgrading industrial productivity, which was being undermined by the Fed’s tight interest rate policies.

Each of these actions was controversial, and was vehemently opposed by financial/intelligence networks directed by the City of London and Wall Street, networks identified by his predecessor, Dwight Eisenhower in his farewell address, as those of the “Military-Industrial Complex” (MIC). Perhaps most important in galvanizing the opposition to him, was his firing of CIA Director Allen Dulles, for his role in dangerous covert operations, such as the murder of Congo President Patrice Lumumba. The final straw was the failed Bay of Pigs operation in 1961, organized to force Kennedy to send U.S. troops to overthrow Cuba’s leader Fidel Castro. An administration official reported that Kennedy responded to the covert action against Cuba by saying he “wanted to splinter the CIA into a thousand pieces and scatter it to the winds.” 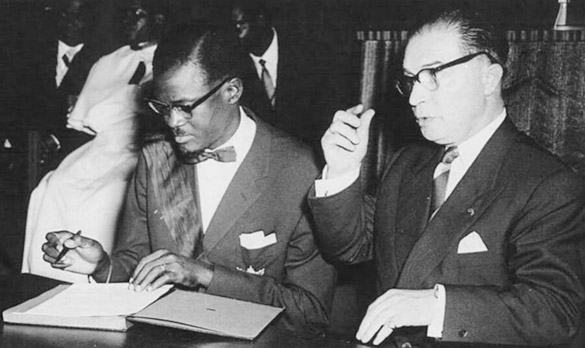 CC/Wikimedia
Congo’s Prime Minister Patrice Lumumba, a JFK ally, assassinated by British Secret Intelligence and the CIA three days before President Kennedy’s inauguration. Here, next to the Belgian Prime Minister, he signs the papers granting independence to his country, then known as the Republic of the Congo (Léopoldville), June 30, 1960.

These actions by JFK set off urgent alarms among those in London and their American allies, who were steering U.S. policy during the Cold War. The possibility that he would break with the doctrine of geopolitics, by which the British and their corporate, globalist allies in the U.S. had made the U.S. the enforcer of London’s post-war policies, was a threat to the Anglo-American order. Lyndon LaRouche identified this policy nexus, of the wedding between British and U.S. neocons and neoliberals, as the source for the plot to kill JFK, and then cover it up.

To protect this nexus, Allen Dulles, who had been fired by Kennedy, was placed as one of seven commissioners who drafted the Warren Commission report.

Why This Is Relevant Today

In addition to his order for the eventual public release of declassified JFK documents, President Trump on January 17, 2021, ordered the release of declassified documents in FBI files on Russiagate, though he did agree to accept redactions requested by the FBI. His Director of National Intelligence, John Ratcliffe, reported on December 3, 2020 that he had declassified intelligence community documents “that would be suitable for the public to see, that wouldn’t jeopardize sources and methods.” He said he shared “literally thousands” more with special counsel John Durham, but that many of these cannot be made public.

In October 2020, Durham was tapped by Trump’s Attorney General William Barr as a special counsel to investigate the FBI and related activity in the Russiagate farce, which alleged that Trump and campaign officials colluded with Russian government operatives to defeat Hillary Clinton in the 2016 election. Over the last few months, Durham has filed three indictments, which hold the potential for even more explosive revelations regarding criminal activity behind the attempted regime change coup against Trump.

Those indicted include an FBI lawyer, Kevin Clinesmith, who altered a document related to Trump campaign adviser Carter Page, which was used to obtain a warrant from the Foreign Intelligence Surveillance Court (FISA) allowing spying on the Trump campaign; a lawyer for the Clinton campaign, Michael Sussman, for lying to the FBI, about providing false intelligence to the FBI regarding an alleged connection between a Russian bank and the Trump campaign; and a shadowy figure, Igor Danchenko, a Russian citizen living in the U.S., for lying to the FBI about his role as a source for the dossier compiled by former British MI6 agent Christopher Steele. The Steele dossier, which has been thoroughly debunked, was used by the FBI in applying for warrants from the FISA court, despite knowing that it was full of lies and unverifiable charges, and that it had been paid for, and circulated by, the Clinton campaign.

The indictments by Durham expose the unholy alliance between U.S. intelligence agencies, officials of the Obama administration and the Clinton campaign, the mainstream U.S. media, and their reporters—who were awarded with prizes for their stories now confirmed to have been complete fabrications—and British intelligence, working on behalf of the City of London, committed to either containing or removing Trump as President. There is an unbroken continuity in the policies imposed by the networks behind Russiagate, with those who opposed JFK—as well as those who covered up the 9/11 terror attacks for the sake of launching “endless wars.”

Will John Durham continue to investigate, and move toward the higher-level officials responsible for these crimes? Is he looking into the roles played by former federal officials such as FBI Director James Comey, CIA Director John Brennan, and Director of National Intelligence James Clapper? What about those in London who coordinated and vouched for the fraudulent Steele dossier? Or Robert Hannigan, the former director of the NSA equivalent, GCHQ, who first claimed he had evidence, in late 2015, of “suspicious interactions” between Trump allies and “known or suspected” Russian agents—and who later came to Washington, D.C., to share his suspicions with CIA Director Brennan?

As events unfolded over the four years of the Trump presidency, it is evident that his opposition to the policies of the globalists running the corporate cartels behind the MIC—especially his efforts at peaceful cooperation with Russia and China—was the casus belli behind the coup attempt against him.

Full disclosure is not only important for revealing the truth about the criminal cabal behind forty years of war in central and southwest Asia, and the moves toward a security/surveillance state in the U.S., but for preventing this same gang of U.S.-UK unilateralists from using false allegations and doctored intelligence to provoke confrontation between the trans-Atlantic countries, and Russia and China, today. On November 22, the U.S. Director of National Intelligence, Avril Haines, was in Brussels, to present “evidence” compiled by U.S. intelligence agencies which purports to show that Russia is massing troops along its border with Ukraine, claiming that this proves that Russia may invade its neighbor by the end of January, or early February, 2022.

The best war avoidance policy begins with full disclosure of those behind the geopolitical operations that have provoked and launched an escalating torrent of wars, regime change coups, assassinations, and sanctions, beginning nearly sixty years ago with the JFK assassination, which continues to threaten the survival of mankind today.