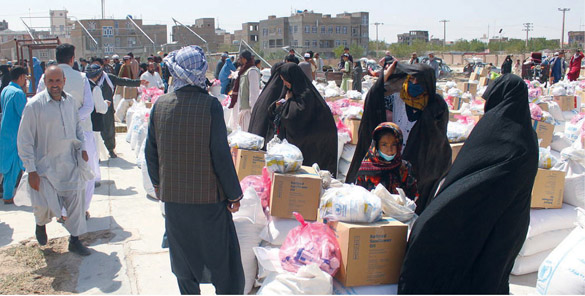 Dec. 12—The international call for global cooperation to rebuild the nation of Afghanistan on July 10 by Helga Zepp-LaRouche, the founder of the international Schiller Institutes, stands out against the policy of genocide now being waged against that nation by the U.S. and allied NATO nations. What is needed beyond immediate aid, she has insisted, is the launching of a modern health care system, with all that entails. Zepp-LaRouche has called this project for international cooperation “Operation Ibn Sina,” after the famous 11th-Century medical genius—as well as poet, astronomer, and philosopher—who was born in the region of today’s Afghanistan and is much beloved across the Islamic world.

After twenty years of devastating warfare against this nation (never fully recovered from the earlier decade-long Soviet intervention), the world’s mightiest military force, the U.S. combined with other NATO nations, rather than building peace through a program of development, has chosen to starve the citizens of Afghanistan to death by freezing the nation’s funds—more than $9 billion—deposited in western banks, mostly at the U.S. Federal Reserve, and forcefully preventing any other nations from engaging in normal financial and trade operations with the country, and simultaneously ordering the IMF and World Bank to cut off all support.

With the bitter Afghan winter descending, “We are now looking at the worst humanitarian crisis on earth,” David Beasley, head of the UN’s World Food program told the BBC on Nov. 8 after visiting Afghanistan. “Ninety-five percent of the people don’t have enough food. And now, we are looking at 23 million people marching toward starvation, and out of that almost nine million are knocking on famine’s door. The winter months are coming. We’re coming out of a drought. The next six months are going to be catastrophic. It is going to be hell on earth!”

Beasley is not alone; the genocide is not hidden from view, as were the Nazi concentration camps during World War II. The numbers of lives at stake now is far greater. The leading news services across the U.S. and Europe have fully described it; the World Food Program, the World Health Organization, and many humanitarian agencies around the world have issued the strongest appeals, echoing more or less explicitly Zepp-LaRouche’s frank assertion that this is a crime against humanity.

The World Health Organization warned in mid-November that 3.2 million Afghan children were likely to suffer acute malnutrition in the coming month and a half, with one million at risk of dying as temperatures drop. In a Dec. 4 article in the New York Times, “Facing Economic Collapse, Afghanistan is Gripped by Starvation,” Christina Goldbaum writes, “Across the country, millions of Afghans—from day laborers to doctors and teachers—have gone months without steady or any incomes. The prices of food and other basic goods have soared beyond the reach of many families. Emaciated children and anemic mothers have flooded into the malnutrition wards of hospitals, many of those facilities bereft of medical supplies that donor aid once provided.”

The same day, an op-ed in Al Jazeera by officials of four Europe-based humanitarian aid organizations stated that without “swift pragmatic action from the international community, more people [in Afghanistan] will die of hunger in 2022 than from violence done in the last 20 years of conflict…. Roughly 75 percent of Afghanistan government expenditures, including healthcare, were previously directly funded by international aid. The abrupt cut-off left hundreds of thousands of public sector employees out of pay. Many more millions who were dependent on that income were immediately thrust into acute poverty. The blow to the private sector and trade has been devastating, and the public health system has been almost entirely out of function.”

In the face of this, the callousness of the U.S. policy is bone-chilling. On Nov. 17, Amir Khan Muttaqi, the Acting Foreign Minister of Afghanistan, wrote an open letter to the U.S. Congress urging it to return the full $9.5 billion in Afghan central bank reserves that had been frozen. He said, “Currently the fundamental challenge of our people is financial security and roots of this concern lead back to the freezing of assets of our people by the American government. I request the government of the United States take responsible steps…so that doors of future relations are opened, assets of Afghanistan’s central bank are unfrozen, and sanctions on our banks are lifted.”

U.S. Special Representative for Afghanistan Thomas West responded publicly to the open letter, stating that the Taliban had forfeited any right to aid when they took Afghanistan “by force”—ignoring the fact that the Afghan army had laid down their arms without a fight, and that the Doha agreement between the U.S. and the Taliban specified that the U.S. pledged not to wage economic warfare when it left Afghanistan. West pontificated that the Afghan government had to first “earn its legitimacy,” as if the right not to starve were something the Afghan people had to first earn. He added: “Legitimacy and support must be earned by actions that address terrorism, establish an inclusive government, and respect the rights of minorities, women and girls, including equal access to education and employment.” West’s sophistry is stark—in order to guarantee the rights of minorities, women, and girls, we will first starve them to death.

Shah Mehrabi, a member of the Board of Governors of the Afghan Central Bank since 2002 and continuing today, told a Schiller Institute Conference held Nov. 13-14: “Unless the Central Bank of Afghanistan was allowed to access its own dollar reserves—this is not the taxpayers’ money of the United States, this is Afghanistan’s earned money, that belongs to the people of Afghanistan—otherwise, based on the data that we had at our disposal, I projected that we would see a spiral of price increases, which we have. I said that there would be food shortages, which we have. I also said that the Afghan currency (the afghani) would depreciate, which it has; and that bank closures would come into being.”

A short report posted by the UN Development Program (UNDP) on November 22 on the state of the Afghan banking system stated clearly, “Prompt and decisive action is urgently needed, with delays in decision-making expected to increase the cost of a banking system collapse—a grim predicament.” A UNDP Resident Representative said bluntly, “Without banking, there’s no humanitarian solution for Afghanistan.”

Motivating her call for Project Ibn Sina, Helga Zepp-LaRouche speaking on Nov. 17 at the “Humanitarian Roundtable for Afghanistan” sponsored by the Council on Global Relations, said that Ibn Sina is an example of how someone so beloved in Afghanistan, and the region as a whole, and whose works enhanced European science and philosophy profoundly, can today continue to be a contributor to universal history, by moving mankind forward.

So, I’m suggesting that the effort to save Afghanistan be called Operation Ibn Sina, because it somehow captures both the proud tradition and also a vision that Afghanistan again can be a pearl of the nations of the world. Afghanistan will be contributing something to other nations. You need to give people who have gone through such hell a vision of a beautiful future.

I think that would capture the imagination of a lot of the people, both inside Afghanistan and out. The danger is terrorism and drugs, and you want to have an image which presents a completely different future, one based on the intellectual tradition which made this country a great country in the past, and it means that it will again be a great country in the future.