This is the edited transcript of Zaher Wahab’s presentation to Panel 4, “The Beauty of True Human Nature,” of the Schiller Institute’s Nov. 13-14 conference, “All Moral Resources of Humanity Have To Be Called Up: Mankind Must Be the Immortal Species!” Dr. Wahab is Professor Emeritus of Education at Lewis & Clark College in Portland, Oregon, and a former advisor to the Afghanistan Minister of Higher Education. Subheads have been added. 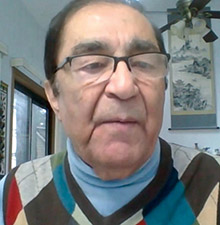 Greetings from Portland, Oregon! Thank you very much for the opportunity to share some thoughts and ideas and concerns about my adopted country, the United States, and my country of origin, Afghanistan.

I’d like to focus on their education systems, and also outline for you, toward the end, an ideal education system which I think is highly needed and also would help us solve some of these problems.

The United States of America is suffering from some severe crises. We have enormous inequalities—economic, social, political, cultural, educational, and other kinds of extremes and inequalities. We’re suffering from racism, sexism, and classism in society. There is sectarianism in our landscape. There are multiple cultural wars under way in the country. There are ideological battles taking place between different groups and movements. There is political polarization such as I have not seen before. Segments of society are becoming highly irrational, anti-scientific, and anti-evidence, but feeling, reacting, and making policy based on subjectivities.

Our infrastructure is collapsing. People, animals, and nature are being exploited to the extreme. We have a runaway military-industrial-Congressional complex which runs the country the way it wants. Our democracy is, indeed, imperiled, and we’re facing an ecological catastrophe. Our institutions, from family to the Supreme Court, seem to be breaking down. And finally, there is a real threat of a nuclear war between the United States and its perceived or real adversaries.

Now, my country of origin, as you might know, Afghanistan, is the poorest and least developed country in Asia. Add to that the four decades-plus wars, occupations, drought, and COVID. These have combined to make the country almost unlivable. Everybody tells us that there’s a massive famine underway as we speak, and the country is marching forward fast toward massive starvation. Many observers, from the Norwegian Refugee Center to the UN, have said that the country is in the worst crisis in the world. Some have called it a Hell on Earth. From what I know, just recently returning from Afghanistan, the country is, in fact, in a real existential crisis. It could disintegrate and fall apart.

The educational system is currently nonexistent. There are no organized schools or education that are really functioning. Before that, and even now to some extent, the quantity of education was very limited. The educational system was imported from Europe and other countries. It is archaic, it is mechanical, it’s abstract, it’s sub-standard, it’s irrelevant to the needs and desires and realities of Afghanistan and the learners. And the system is almost disruptive of the economy, polity, culture, and society of Afghanistan.

Education has always been a very low priority at the individual, family, or national level. Schools have no buildings; there is a teacher shortage. The teachers who do exist are under-qualified. There are very few to no resources, and there is very little support for education systems. Even as they are, the education system in the United States and in Afghanistan is essentially not only not a solution to our serious essential crises, but the education system itself has become a social problem for both countries, and I would say, throughout the world.

A Different Kind of Education System

So, there’s a real need for a different kind of education system that would educate, train, and equip a different kind of human being for a different world order. That proposed education, I think, should be holistic; that is to say, the education system must address and develop the cognitive, affective, psychological, and physical aspects of the learner or student. The school must merge with society: We must do away with the dichotomy between being a student, and then being a human being or a citizen; between a learner and a doer. These need to merge, and as John Dewey reminded us, the schools should be like a micro-society. Teaching and learning must take place, as [Lev] Vygotsky tells us, by doing and watching; what is called social learning and learning by doing.

The educational system must liberate individuals, collectives and groups in society and not serve as an instrument of domination. Both countries, and the world I would say, must follow the progressivist philosophy that John Dewey was known for. The education system must be interdisciplinary, the discipline must be integrated, and they must be based on problem-solving. In other words, the educational system, as Paulo Freire would say, must pose problems and then help students to solve those problems.

It’s only after these education systems, in applying those, that the two countries can solve their serious problems and then be a model to emulate for the rest of the world.