This is the edited transcript of Diane Sare’s presentation, to Panel 4, “The Beauty of True Human Nature,” of the Schiller Institute’s Nov. 13-14 conference, “All Moral Resources of Humanity Have To Be Called Up: Mankind Must Be the Immortal Species!” Mrs. Sare is the Founder of the Schiller Institute NYC Chorus and a long-time associate of Lyndon LaRouche. Subheads have been added. 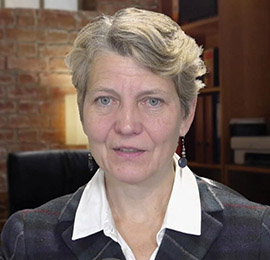 What we are witnessing is a total breakdown of society—I can speak for the United States, and I suspect Western Europe, as well.

What else can we conclude when the head of the World Food Program, David Beasley says a mere $7 billion could prevent tens of millions of people from dying of starvation, and no individual, no group of individuals steps forward to do anything about it?

People tend to have a mistaken idea of what education is. Maybe they think it’s memorizing a bunch of so-called “facts,” or developing a proficiency in some area, or a skill—but what is the difference between that, and teaching a circus animal to do tricks?

Of course, with the collapse of literacy and any standard in American public schools, even this circus-animalistic conception of standards no longer exists—unless you consider playing video games a skill.

In a 1999 policy paper, “On the Subject of Education,” Lyndon LaRouche writes that the turning point in a child’s development is the realization of the meaning of death—not witnessing the death of a loved one, a particular person, or a relative, but the idea that death is the inevitable conclusion for every single person now living.

This understanding, LaRouche asserts, is not a cause for pessimism, but a cause for optimism, especially as the child has the experience through education of reliving the process of making discoveries of universal principles, which were made by people who are nominally now dead. He or she experiences the discovery as alive, living in his or her own mind.

So, how do we get there from here?

I spoke with a teacher on the West Coast who told me that in her school (and this, probably, is now common) 6- and 7-year-old children do not know the sounds associated with letters, or the numbers from 1 to 20. Partly this is a result of the pandemic, where children have been out of school for nearly two years, and in many cases, if they are poor, stuck in small apartments with their iPhone or iPad screens. This teacher told me that on Monday mornings her students all are completely crazy and out of sorts, as if they are going through some kind of addiction withdrawal from these screens.

She reported that a second-grade teacher in her school lamented,

How does one address this?

Clearly the curricula developed by people like [Wilhelm von] Humboldt and [Johann Friedrich] Herbart would be a starting point for an educational program—but we also have to do something urgently right now to change the culture as a whole. We have millions and millions of people in their late teens and 20s who will not have time to master Classical Greek and three other languages before they have to function as adults, before they must address the crises that they themselves are facing.

The Primacy of Character Development

I’ve come to the conclusion that Helga Zepp-LaRouche’s world health platform, combined with Dr. Joycelyn Elders’ youth medical corps, is the solution to this problem.

If it is true that the purpose of education is the development of character, or a beautiful soul as Schiller might say, then the moral person, is the person who acts for the common good, or the general welfare, as it says in the U.S. Constitution. This is an educated person.

In the Montgomery bus boycott, as led by Dr. Martin Luther King, Jr., he took people through a crash course of character and moral transformation in just one year, in a way that now doesn’t occur in 15 years of so-called “education,” and I think this result derived from what Lyndon LaRouche said about discovering the meaning of death. Since death is the inevitable end, what does life mean? In Montgomery, Alabama, the question of being treated like an animal, by a person acting like an animal, who believes that he or she was a superior because of the color, or lack thereof, of their skin, clearly was a violation of the principle of the dignity of human life.

What the people decided, with Rosa Parks taking the first courageous action, on December 1, 1955, was that they would no longer participate in a system of injustice. Very rapidly the entire black population of Montgomery, Alabama joined the bus boycott, and the effect was felt, but not enough to get a change, at least not right away.

Starting the boycott in winter was tough. While Alabama may not be as cold as Buffalo, New York, the winters can bring a little snow, and a lot of cold rain and mud. People had to trek for miles in adverse conditions, but they were proud, and they carried themselves with dignity. As the months wore on, carpools were organized, and the black-owned taxi companies would shuttle people for the same fare as what they could pay on the bus, but the city of Montgomery quickly made this illegal. White women, who depended on their black domestic help, took turns picking up their workers all over town, and a man named John King, whom we had the honor of meeting there in 1992 when some of us were working on Mr. LaRouche’s presidential campaign, told us how he and other postal workers, who were familiar with the layout of the city, would map out all of the carpool routes.

This required great coordination and attention to detail, as well as a willingness to endure physical hardship, while enjoying the liberation of not participating in injustice. This boycott lasted over an entire year!

When the word came that the U.S. Supreme Court had upheld the ruling of the Federal Court in Alabama, that bus segregation was unconstitutional, and in violation of the 14th Amendment—it took time, because the City and the bus company had appealed that [lower court] decision, so it went to the Supreme Court—in December of 1956, hundreds of residents gathered in two large churches to decide whether to continue the boycott until the Supreme Court decision was officially delivered to Montgomery, and the bus company forced to comply. It was of course agreed that after all this, no one was going to set foot on a segregated bus, and they could wait a few more days.

In one of the churches, a white minister from the north was giving the sermon, and he was reciting 1 Corinthians 13, and when he said, “When I was a child, I spake as a child, I understood as a child, I thought as a child: but when I became a man, I put aside childish things,” the last phrase could barely be heard over the cheering and clapping and shouting.

This is the transformation of our population which is so desperately needed today.

What would be the effect of young Americans, or young Europeans enrolling in a crash program to become medical workers to save lives? Or in an even shorter training session to deliver food and nutrition to starving children in Haiti, Yemen, or Afghanistan?

Consider the kind of mobilization which would be required to ensure that not one person in the United States, or anywhere in the world ever went to bed hungry. What would that require of the people carrying it out?

As Leibniz has told us, there is not one evil which does not provide the opportunity for a greater good. So, I will ask you now, who is in more desperate need: the children of Afghanistan, or the children of the West who are quickly destroying their own future? It may be that the starving and desperate people, whether they are in Kabul, or the South Bronx; Haiti or West Virginia; Yemen or Buffalo, will be the ones to save the West, by pricking the shriveled-up conscience of our people and allowing us to regain our dignity and humanity, by doing what is necessary to save millions of lives.