The Chinese Commitment to Education,
as Observed by an American Teacher

This is the edited transcript of Denise Rainey’s presentation to Panel 4, “The Beauty of True Human Nature,” of the Schiller Institute’s Nov. 13-14 conference, “All Moral Resources of Humanity Have To Be Called Up: Mankind Must Be the Immortal Species!” Ms. Rainey is a retired educator and elementary school teacher and principal from Rochester, New York. Subheads have been added. 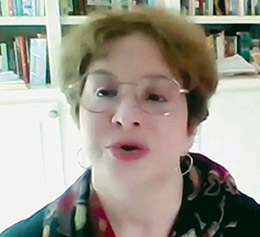 My name is Denise Rainey. I am a retired educator in upstate New York. I was a classroom teacher for 20 years, and a school administrator for 20 years, in an urban district. Prior to retiring, I had the good fortune to be chosen by an organization called the China Exchange Initiative, to be one of 30 American school principals to visit China in cohort, at the invitation and courtesy of the Chinese government. While there, we visited a number of Chinese schools at the elementary and high school levels. We had previously been paired with Chinese principals who had come to visit us in our schools in the Fall, and in the Spring when we went to China, we re-paired with our matched principals and spent more time in their schools and in our broader tour of schools.

While there, we met with local Ministers of Education to discuss comparisons between Chinese education or what we observed, and the American system. Chinese educators were most interested in talking to us about how to increase the teaching—so to speak—of creativity, and in comparing what our suggestions would be for their systems.

The Chinese school day is similar to ours in some small ways, but in broader ways noticeably different, starting with arrival in the morning. Every school is a neighborhood school, so all students live within walking distance of their schools. They are escorted to school in the morning, and in the afternoon/evening, from school, by family members. So, on arrival, we would see the families lined up, waiting to come in. When the gate opened there was a very orderly entrance, an orderly dismissal of students with either parents or grandparents seeing them off or waiting to receive them to leave. There was an early start to the day, and a late finish to the day.

The elementary school days that I spent most time with, typically ran from 8:00 a.m. to 5:00 p.m. or 6:00 p.m. with a one-and-a-half to two-hour break in the afternoon when children left the school, went home, had a meal, maybe did some chores, maybe did some practice with their families, and then came back for round two, so to speak. So, it was a very long day.

When children were observed by their teachers to be struggling with something that was taught in the morning session, it was common—I saw several times where the teacher would wait to meet the parent or grandparent who came to pick the child up, and then say to them, “Your child or your grandchild is struggling with this morning’s content.” And then, instead of leaving for the one-and-a-half to two-hour break, the parent or grandparent would go into the school with the child, and the teacher would do some re-teaching immediately there with the family. And then the family would be expected to go home and through the evening and rest of the week, work on the skill or the piece of academia that the student was struggling with, at home. 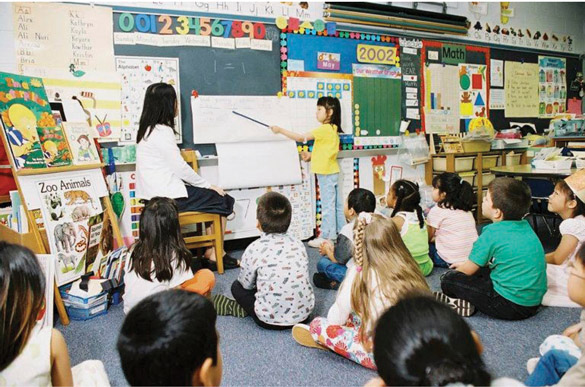 There’s such a strong sense of family responsibility toward what the teachers are doing. I mean, frankly, if I saw an American teacher go out and say to a parent at the end of a school day, “I need you to come back in, because your child didn’t understand what I was teaching, and I want to show you, so that you can help them at school,” some parents would willingly come in and expect to be part of that, but some would say, “No, I have things to do. I can’t do this; I don’t have the time now.”

What I observed was, parent and grandparent just literally bowing in thanks to the teacher for taking their break-time to do the re-teaching, and every effort made to reinforce that teaching at home. And a true sense of responsibility that we’re in this together. You showed my child or my grandchild a skill or a technique or a protocol to be followed; they didn’t understand it. Now, we all have to pitch in together to make sure the child learns this.

It’s a very tight community, where everyone is there. In the rural schools, we saw the same level of materials. We saw libraries of books; lots of children’s books written in English. Of course, full libraries of children’s books written in Chinese and other foreign languages—German was well represented, a little bit of French. But in terms of the materials that students have to work with, something appeared to be very similar. It appeared that whatever was needed was provided. Which, if you know how American school funding works, there’s a big contrast in that regard. 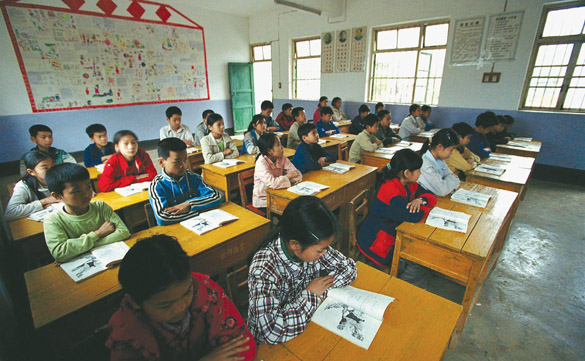 The Pride of Ownership and Responsibility

Other differences that were glaring when we were in China, were the sense of ownership of the school: the building, the facility, the grounds, the program. And we saw amazing student-created intricate 3-dimensional bulletin board and hallway displays.

We kind of explored that. How does this level of pride and ownership come about? One of the things we learned, among many, was that, in China, the students clean the schools. What I mean by that, is that every cluster of schools, every two or three or four facilities, has a floating custodian who comes in to make any repairs, or to do anything that an adult should do.

But when it comes to sweeping the floors, washing the boards, mopping the floors, cleaning the bathrooms, cleaning the cafeteria, the students in the building are divided into teams. Each team takes their week on rotation to clean the school. They take that very seriously. I was told that they get competitive with this. If it’s a particular team’s turn this week to clean the school, they will literally give up their lunch period to do a re-check of all the bathrooms and a freshening up of the bathrooms. Or they’ll go into the foyer where the leaves blew in during arrival and sweep that out. They will come early and stay late, to make sure that the school is spotless that entire week. That’s their responsibility.

When we said, “Do the parents object to this, the cleaning? Does anybody see this as an issue, or that a paid adult should be doing this?” The response was overwhelmingly “No! You don’t do this in your schools? How do you teach your students responsibility? How do you teach them ownership and pride of where they are and what they have?”

Curriculum was amazingly encompassing in the schools that we visited in China. Very rigorous academic sessions. We noticed some of the very strategies that we share with teachers in their professional development. Just techniques to learn to check for student understanding.

We do something at the elementary level that we call “Think, Care, Share.” The teacher may pose a problem or a question to be considered, and students are told to turn to a partner and think out loud with their partner about the question or the problem that was posed. And then after everyone has been given so many minutes to share with a partner, then they share out as a group. Each pair of students can say or contribute what they think might be a solution or the answer to the question or the problem. We saw a lot of that in Chinese classrooms.

For example, in an art room with large tables where students were doing calligraphy, they would actually put on a white robe—and I feel ignorant of Chinese culture, so I can’t tell you what it was, but it appeared to be to me like the traditional robe of say, the old scribes; with a sash. They would put that on and take their place at a table in front of huge pieces of rice paper, and with the traditional inkwell and ink pen, they would practice the Chinese characters, the calligraphy that we think of as Chinese writing. 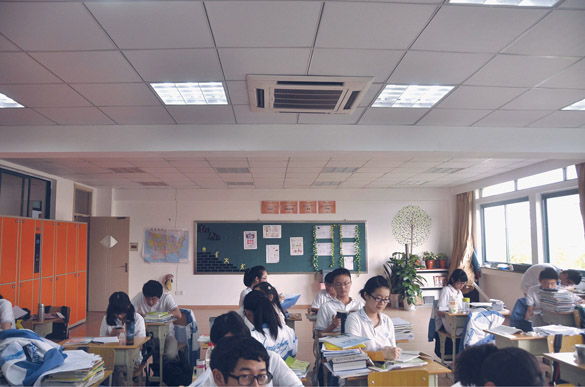 CC/Jeff Chenqinyi
“The Chinese are very focused. They have a real sense of camaraderie: ‘We’re going to make this nation the best that we can make it for each other.’ Sadly, I don’t see that in U.S. schools. I think we may have had that in the 1960s.”

Optimism and Excitement for a Productive Future

Every English-speaking adult that I could speak with and ask, “Children here just seem so positive and enthusiastic about what they’re doing.” The response I got was that they’re a developing economy. The Chinese have a very strong sense of optimism and excitement for their future. Students are going in, every day, feeling like they have a purpose, and they know that they’re being educated to serve their nation in the future.

When we went into the high schools, there was a very clear sense of purpose among high school students around what they were learning and the fact that they knew they were going to be applying this when they finally go out to the work world.

Sadly, I don’t see that in U.S. schools. I think we may have had that in the 1960s, when the United States was competing with Russia. The United States was sort of jolted by Sputnik, and an awareness that the Soviets were advancing scientifically faster than we were. And so, during the John Kennedy era, there was a huge push for American schools to catch up with advancements in science and mathematics. NASA kind of drove the American curriculum during that period.

Right now, I don’t see anything driving that sense for American students of “We have something to accomplish; we have something to achieve. We need to become more competitive.” Unfortunately, the American media too often says, “Oh, we’re the strongest economy in the world. We have the best educational system in the world. We have the best university systems in the world.” People who know, know that that is no longer true. None of those statements are accurate. What’s sad, is that American students and the American school systems in general, don’t have a sense of what we’re striving for to achieve as a nation.