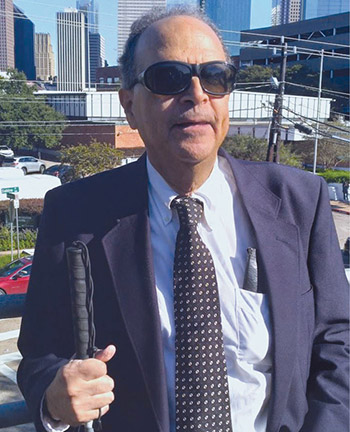 Dec. 18—On December 1, Joel Dejean filed with the Texas Secretary of State’s office his intention to run as a LaRouche Independent candidate for U.S. Congress from the newly-created 38th Congressional District in the November 2022 elections. He now joins Diane Sare, who is running as a LaRouche Independent candidate from New York to unseat Senate Majority Leader Charles “Chuck” Schumer.

To have his name on the ballot, Dejean will now have to gather 500 valid petition signatures between the March 1 Party Primary elections and June 23, of registered voters in the District who did not vote in those Primaries.

Born in 1958, Joel Dejean emigrated with his family from Haiti when he was just six years old. But as the candidate said, he “spoke no English, had only six months of schooling, and no skills.” Since then, he says he has “learned a few things,” becoming an electrical engineer and, since meeting him in 1987, a collaborator of Lyndon LaRouche.

A Man With Vision

In a campaign video, candidate Dejean addressed his future constituents in the 38th C.D., stating his reasons for campaigning for U.S. Congress:

The world is facing two major crises: one, the worldwide pandemic; and two, hyperinflation, which is not caused by the [SARS-CoV-2] virus, but is caused by the foolishness of the Green New Deal, the push for “renewable energy,” which is jacking up the price of all energy.

We have an inflationary blowout which is occurring now in energy prices and food prices, largely caused by the push for the Green New Deal, and the hyperinflationary bailouts going directly to Wall Street, with the Federal Reserve still pumping $140 billion every month to bail out the stock market and the Wall Street vulture banks.

We have to fight the virus, not carbon. Carbon dioxide is not the thermostat for the world’s temperature!

We have to get back to high energy-flux dense fuels. We have to keep using fossil fuels—oil, coal, natural gas—until we get a full-scale program for small modular nuclear reactors, in the 100-300 MW range.

Taking head-on the fraud and danger of the Green New Deal, in an October campaign video, he said:

It’s time to put engineering expertise into the U.S. House of Representatives! I am tired of hearing lawyers, accountants, and political science majors babbling on about the Voodoo Science of climate-change. It is time to finally bury the stinking, rotten corpse of Enron’s Bush-league deregulations, scrap all 11,000 useless and ugly windmills that sprouted like weeds all over West Texas, and go full speed with clean, safe, reliable nuclear power….

That is why I fully endorse the call issued last week by Helga Zepp-LaRouche, the Schiller Institute, and Guus Berkhout’s Climate Intelligence (CLINTEL) group attacking the Malthusian views of the climate-warmers and this crazy COP26 event that’s determined to force the Green New Deal on the whole planet.

In that same video, Dejean refers to the deadly blackout that hit Texas during a cold snap last February:

Never again should millions of Texans have to freeze in the dark for the “flea market” and green fascism.

But neither should the citizens of Haiti, Afghanistan, Yemen, or any nation suffer and die from the diseases of geopolitics, poverty, and war.

I was ashamed of my adopted country over the last few weeks, when I saw how the Biden Administration treated my fellow Haitians who had come to the Texas border, seeking relief. They were rounded up like cattle and put on airplanes, and by the thousands, flown back into a desperately depressed Port au Prince.

On September 25, I participated in a webinar with the Schiller Institute and The LaRouche Organization, discussing the Schiller Institute’s plan for infrastructure building in Haiti, involving collaboration between China and the United States. I proposed that China and the United States take Haiti, and not only develop its infrastructure for water, water treatment, and power—but take Haiti from charcoal power to fusion power in the coming decade.

That would give Haiti a mission; that would show the rest of the world that it is possible for a “developing” nation to actually develop.

Dejean says that he looks forward to serving the nation in Congress to get the United States back on its feet:

Then put the Federal Reserve Bank under a new National Bank directing low-interest long-term loans to fund great infrastructure projects, like the North American Water and Power Alliance, to save the western parts of the U.S. from long-term droughts and refilling the Ogallala Aquifer in North Texas and the Great Plains states.

We will also have financing for high-speed rail, especially connecting Houston, Dallas, and San Antonio with magnetic levitated train systems, which have been on the books for 30 years now without a single centimeter of track being laid.

Dejean is calling for “fully funding a crash program to achieve controlled thermonuclear fusion in the next 10 years, and fully funding NASA’s Artemis program to get back to the Moon by 2024 and get to Mars in the next 30 years with fusion powered rockets that can get us there in a few days, as opposed to seven months with SpaceX.”

In an appearance on the Sare for Congress Symposium Dec. 10, calling on his engineering career in the defense industry, Dejean spoke about the direction U.S. foreign policy should be taking:

Most of the people in the defense industries would love to work on something useful, something worthwhile for mankind. It’s a political decision: are we going to go for broke, go for nuclear war, or are we going to join with Russia, China, India, and other nations in the Belt and Road Initiative, to develop the Eurasian landmass, to develop South and Central America, to develop the Caribbean—Haiti, the Dominican Republic—and join in a space-bridge to go back to the Moon, and eventually to Mars.

More information about the Dejean campaign is available here. To reach the candidate—
joeldejeanforcongress@gmail.com