Afghanistan: The Dimensions of Hell on Earth 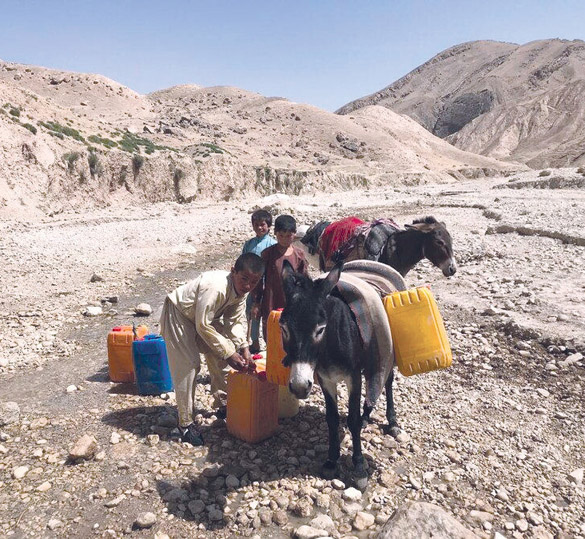 WFP
Two droughts in three years have only exacerbated Afghanistan’s harsh environment. With winter closing in, human life exists on a thin margin. Here, three boys are transporting water, obtained from a wadi, on the backs of donkeys near Tangi Shadyan, September 15, 2021.

It is absolutely hell on earth in Afghanistan. 23 million people face starvation. 95% of Afghans don’t have enough food. Children are dying every single day. Regardless of the politics, regardless of the past, every child should HOPE and have a chance for survival!

On December 8, the UN Office for the Coordination of Humanitarian Affairs (UNOCHA) Afghanistan issued an overview report from an Inter-Cluster Coordination Team, titled Afghanistan: ICCT Real-Time Response Overview, Situation Report, on the dire situation in Afghanistan, population 38 million, combining reports from multiple agencies, including from the WFP, the World Health Organization, Food and Agriculture Organizations, UNICEF, and several more. The report summarizes the period September-November 2021 in terms of specifics of emergency need, what was done, and what was not done.

The following selected updates from the UNOCHA indicate the dimensions of the crisis.

Even prior to the events of 15 August, the humanitarian situation in Afghanistan was one of the worst in the world. By the mid-year mark, nearly half of the population—some 18.4 million people—were already in need of humanitarian and protection assistance in 2021.

The situation then worsened to the point that,

An estimated 22.8 million people, or 55 per cent of the population, are expected to be in crisis or emergency levels of food insecurity (IPC 3+) between November 2021 and March 2022, a nearly 35 per cent increase from the same season last year (16.9 million). 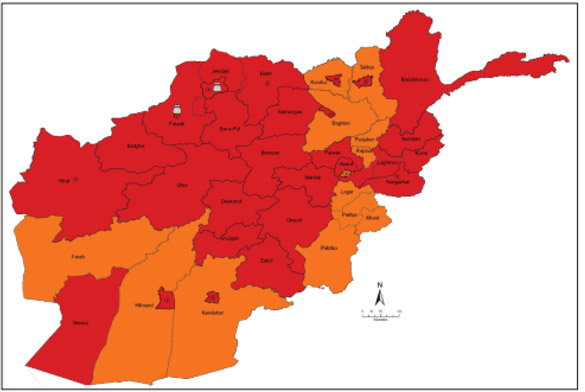 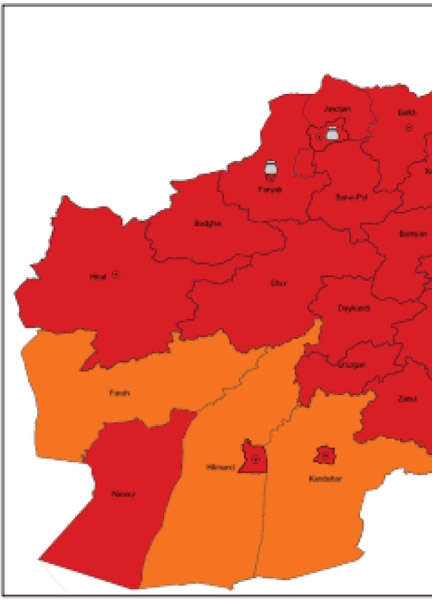 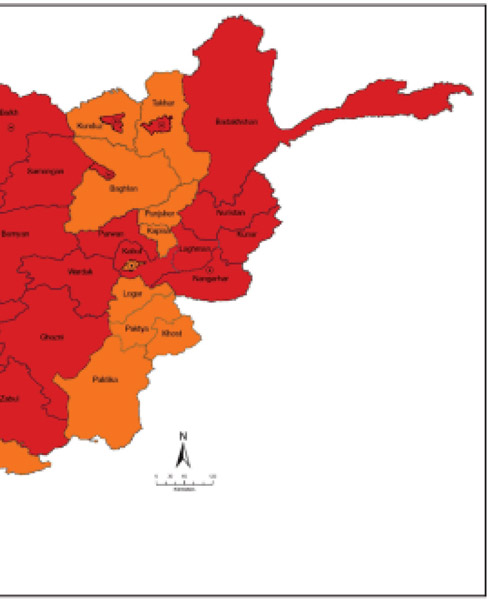 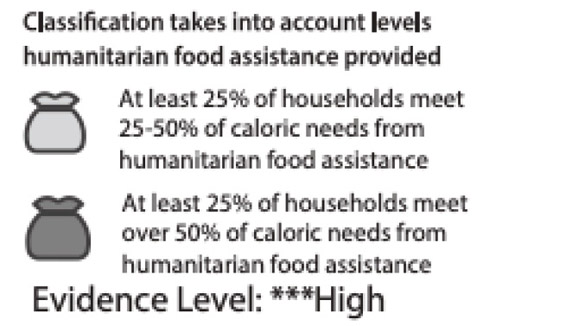 The IPC reference is to a system of five categories for severity of food insecurity, called the Integrated Food Security Phase Classification. The categories go from minimal (1), to stressed (2), crisis (3), emergency (4), and finally, famine (5). Figure 1 shows the extent and severity of the food crisis expected for the November 2021 to March 2022 period, if there is no major intervention. The report states:

No provinces have been included under IPC 1 and 2 during the projected period till March 2022. Some 9 million people are projected to be in IPC 4—the highest number in the world, both in absolute and relative terms.

These millions in the category of IPC 4 “emergency” food insecurity include 10 of the 11 most populous urban centers in the nation. And 22 of the 34 provinces of Afghanistan are ranked as food “crisis” (IPC 3) areas.

Over the September to November period, 7.9 million people were reached with food assistance by various groups, across all 34 provinces, but the need is far greater. During this same period, 201,560 children aged 6-59 months, received treatment for Acute Malnutrition, across 27 provinces. Thousands more need help urgently. Despite an attempted rush to pre-position food and humanitarian supplies at key locations across this mountainous nation, the onset of Winter now is causing inevitable transportation limitations.

The 2021 wheat crop in Afghanistan, affected by drought in addition to other limitations, was down by 40% from recent, average harvests. The drought was the second in four years, and the worst of its kind in 27 years. The distribution of winter wheat seed has been attempted (for planting in the Fall), which aimed to get out 10.25 metric tons of seeds across 31 provinces by November, to some 1.43 million households. The idea is that one farm household can produce its needs in one crop year. Fertilizer assistance has been attempted, but with limited effect. This Fall, the price of DAP—Di-Ammonium Phosphate—shot up 95%, month-on-month. The 2022 crop year prospects are grim.

Drought is not only a food security crisis—the drop-down of safe drinking water and water for handwashing have led to the spread of the AWD (Acute Watery Diarrhea) outbreak, particularly affecting children. Eighteen provinces are currently facing a catastrophic AWD situation.

In response, “8,329 wells across 24 provinces have been shock chlorinated” as part of an attempted wide response that has served 3 million people. But millions more are affected, and by many microbes. In Kabul, one million chlorine tablets were delivered to the Department of Public Health for household water treatments, targeting 33,000 people.

In addition to outright closures of clinics, remaining hospitals and facilities are severely stressed from the financial system crisis, which means staff and suppliers can’t be paid, fuel and power are lacking; no “normal” functioning can take place at all. Since September 1, 265 tons of medical supplies have arrived in Afghanistan, delivered to provincial or regional warehouses, and are being distributed. Much, much more is needed.

The COVID-19 spread is a terrible fact of life, along with fears of the impact of Omicron and other variants. But other infectious diseases are present and spreading. For example, since September 1, a tuberculosis screening of 248,570 people at ports-of-entry turned up nearly 3,830 presumptive cases, and 57 confirmed as positive. The suffering and complications from malnutrition at all ages is terrible.

Small numbers of medical staff, called Rapid Response Teams (RRT), have been deployed in a few instances, including 10 RRTs at ports-of-entry to screen for COVID-19 and seven RRTs across Kabul Province to conduct surveillance for AWD. But under the acute impoverishment, there is no medical system.

The situation is exemplified by the announcement this week from the Afghan-Japan Hospital in Kabul, the only facility treating COVID-19 in the city of 4 million people, that it has run out of diesel fuel needed to produce oxygen. The hospital cannot afford it. Staff have been working without pay for months, and supplies of all kinds are acutely short.

The provision of basics for shelter and necessary NFI (non-food items) is predictably a disaster, for the same reasons as the crises in all the other categories of necessities of life—the dysfunction of the banking system and supply chains, under conditions of the continued sanctions and freezing of national assets abroad. Limited assistance for winterization has been provided to some 53,000 people across 34 provinces, including in-kind donations of blankets, and heating/fuel aid; shelter aid has gone to 25,000 across five provinces; and 149,000 have received standard NFI assistance in 19 provinces. The situation is unlivable. 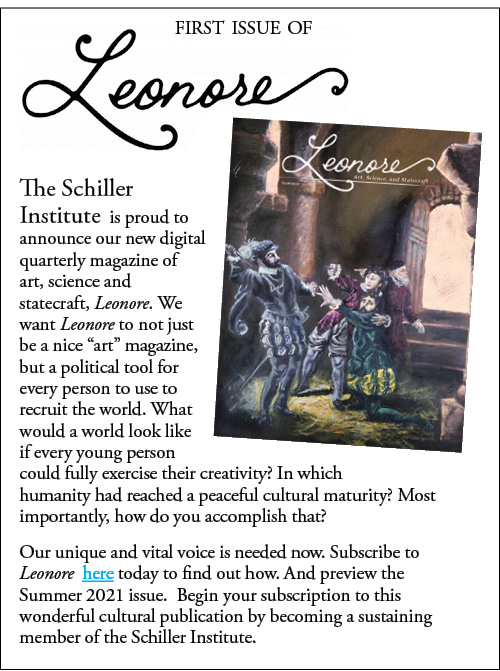