Jan. 14—A week of diplomatic conferences, scheduled to resolve the deepening tensions over Ukraine between Russia and the United States and NATO, did not succeed, based on the initial press briefings and read-outs produced by the participants. The talks came after two video calls between Presidents Joe Biden and Vladimir Putin. They were centered on U.S. intelligence charges of an impending invasion of Ukraine by Russian forces, and the Russians’ insistence on receiving written, legally binding treaties from the United States and NATO agreeing to no further eastward expansion of NATO, to include a prohibition on placing sophisticated weapons and anti-ballistic missile (ABM) systems in Ukraine.

Typical of the opposing demands were comments by the official who presided over the Russian delegation in the Jan. 9-10 meetings in Geneva, Sergey Ryabkov, the Deputy Foreign Minister; and Wendy Sherman, the Deputy Secretary of State who led the American side. Ryabkov reiterated Russia’s view that it is essential that “Ukraine must never, never, ever become a member of NATO.” He also rebutted the American charges against Russia, saying, “There is no reason to fear some kind of escalatory scenario.” 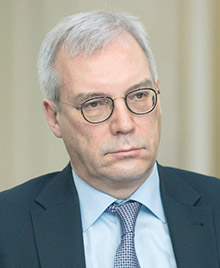 Ryabkov’s statements were reinforced by Deputy Foreign Minister Alexander Grushko, who presided for Russia during the January 12 Russia-NATO Dialogue talks. He began by saying that “there is no unifying, positive agenda between Russia and NATO,” accusing the United States and NATO of reverting to the Cold War strategy of “containing Russia.”

Sherman said of the Russian security demands, following the eight-hour session on Jan. 10, that they are “simply non-starters for the U.S.,” adding, “We will not allow anyone to slam closed NATO’s open-door policy.” This was a restatement of Secretary of State Antony Blinken’s comments before the meetings began, as he told American television audiences on Sunday that the talks “are not about making concessions,” but seeing “what can be done to reduce tensions.”

In blaming Russia for the increased tension, Blinken repeated the speculative assessment of U.S. intelligence community officials that Putin is prepared to launch “another invasion of Ukraine.” He falsely characterized Russian aid to pro-Russian forces in the Donbas region, and the referendum by which Crimea returned to Russia, as “invasions”; and concluded his diatribe with, “One country can’t have a sphere of influence.”

Blinken’s statement exemplifies what stands in the way of making progress in these talks. Given U.S. military deployments globally to enforce a “sphere of influence,” its launching Color Revolutions and regime-change coups as in Ukraine and Libya, and the “endless wars” in Southwest and Central Asia, it should be obvious why Putin is demanding reciprocal, legally binding security guarantees! The hypocrisy demonstrated by Blinken, who pompously speaks of defending a unipolar, “rules-based order” by such tactics, plays a major role in increasing tensions.

Not mentioned by those who accuse Russia of planning an unprovoked attack on Ukraine, is that fully one-half of Ukraine’s armed forces presently are deployed along the Dnieper River, which separates the small Donbas region of eastern Ukraine from the rest of the country. This threat to the Donbas “republics” was mounted before Russia mobilized its units toward Ukrainian borders. Also unmentioned are the threats of Ukraine’s President to retake the “areas under Russian military control”; the supply of sophisticated weapons to the Ukrainian military and pledges of support from NATO members to defend the nation’s sovereignty; and the ongoing NATO maneuvers along the Russian border in other former Warsaw Pact countries. NATO nations (in particular the UK) have deployed some of their military forces inside Ukraine and are conducting expanded naval operations in the Black Sea.

Despite the failure to resolve the crisis in the Jan. 9-13 sessions, there were some indications that progress was made. Ryabkov, for example, described the talks as “difficult, long, very professional, deep, concrete, without attempts to gloss over some sharp edges. We had the feeling that the American side took the Russian proposals very seriously and studied them deeply.”

Former CIA analyst Ray McGovern pointed to an agreement to discuss missile emplacement in Europe as a possible breakthrough, in a Jan. 11 column “U.S.-Russia Talk About Where Not To Place Missiles,” posted on antiwar.com. Ridiculing the Washington Post as representative of mainstream media coverage in its description of the outcome as “Impasse, Deadlock,” McGovern wrote that Sherman’s suggestion for talks about locations of intermediate-range missile emplacement in Europe, is a step forward. He added that Biden had promised to discuss intermediate forces’ deployment “as an opening ‘Quid’ for the talks. It seems now, this turned out to be the case,” McGovern assessed. He concluded that this points to other possible breakthroughs.

The U.S. withdrawal from the Intermediate-Range Nuclear Forces Treaty of 1987, announced by then-President Donald Trump in October 2018, has certainly contributed to Russia’s concerns over American intentions to impose a nuclear containment around Russia, which could ultimately include nuclear weapons based in Poland, the Baltic States, and Ukraine.

Another note of optimism was sounded by veteran Russian expert Dr. Gilbert Doctorow. After attending the debriefing following the Organization for Security and Cooperation in Europe (OSCE) talks in Vienna on Jan. 13, Doctorow told RT that he is “optimistic,” that the “likelihood of armed conflict, though not negligible, is extremely low.” These have been civilized and sophisticated discussions, and “the Russians are being heard.” He added that it is noteworthy that, for all the talk of NATO solidarity with Ukraine, “country after country ... have said they will not in any way send a single soldier if they [Ukraine] engage in a conflict with Russia.” 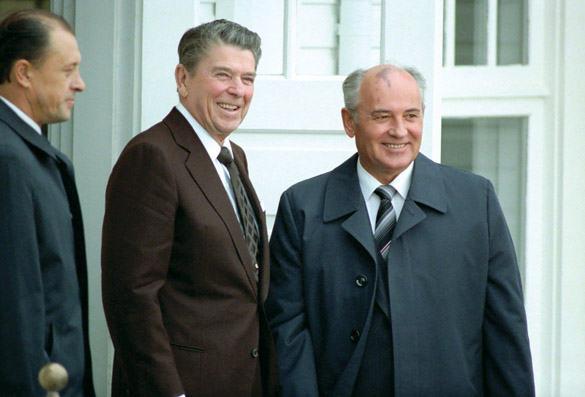 Ronald Reagan Library
Although President Reagan and General Secretary Gorbachev failed to reach an agreement on the elimination of nuclear arms at Reykjavik on Nov. 10, 1986, the process resulted in the 1987 Intermediate-Range Nuclear Forces (INF) Treaty.

While some say the good news is that both sides are talking, Putin has said that is not enough, that actions are needed beginning with the ratification of the treaties Russia has drafted. The United States has offered verbal assurances and handshake agreements in the past—for example, the February 1990 promise by then-Secretary of State James Baker III that NATO would not expand “one inch eastward”—but has repeatedly violated those promises. Today, 30 years later, NATO has moved 1,000 kilometers to the east. It is unacceptable for Russia’s security, Putin said, that the United States and NATO could place sophisticated missiles, including some armed with nuclear devices, within a five-minute reach of Moscow.

Our actions will not depend on the negotiation process, but rather on unconditional guarantees for Russia’s security today and in the historical perspective. In this connection, we have made it clear that any further movement of NATO to the east is unacceptable. Is there anything unclear about this? Are we deploying missiles near the U.S. border? No, we are not. It is the United States that has come to our home with its missiles and is already standing at our doorstep. Is it going too far to demand that no strike systems be placed near our home? What is so unusual about this?

The real threat posed by NATO was addressed by Schiller Institute President Helga Zepp-LaRouche in her weekly webcast dialogue on Jan. 13, during which she warned that the danger comes from the arrogant mindset which characterizes the war party in the trans-Atlantic region. Blinken and the key NATO leaders, such as NATO Secretary General Jens Stoltenberg, operate from the assumption that America must remain the dominant world power, that the West “won the Cold War” and therefore possesses the right to force the submission of all other nations to its vision of a unipolar world. The economic emergence of China, the modernization of the Russian military, their alliance as sovereign nations, represent a threat to this post-Cold War unipolar order, especially given the accelerating collapse of the western economies and financial system.

While some cling to the illusion that the U.S.-NATO military power protects the dominance of “western values,” the reality is different, as can be seen in the destructive deployment of NATO countries’ military forces against many nations, including Afghanistan, Libya, Syria, Iraq, and Yemen. Does it make sense, Zepp-LaRouche asked, to remain in a military alliance which threatens to launch a war that would destroy every nation in Europe?

I think we have ... now a situation where we have to replace NATO with a new security architecture which guarantees the survival and security interests of all.

She continued, using the contrast between the famous 1648 Peace of Westphalia which ended the Thirty Years War, and the infamous Versailles agreement at the end of World War I. The principles of the Peace of Westphalia, as Helga LaRouche recalled, were first:

In contrast, the victors in the First World War accused Germany of sole responsibility for the war, and imposed on it enormous, punitive reparations, which led to hyperinflation, then a depression and subsequent social chaos, which paved the way for the rise of the Nazis.

Zepp-LaRouche concluded by reiterating that today, we must think differently than to assume peace can be achieved by imposing a unipolar order backed by the military power of the U.S./NATO alliance, a global order that benefits primarily the City of London-Wall Street-Silicon Valley financial interests. Rather,

Under such an agreement, the impulse for seeking military solutions for economic crises can be replaced by cooperation for mutual benefit, which is the only real path for peace.