Ray McGovern: Putin Is Being Heard on U.S.-Russia

The following are excerpts from a Jan. 15, 2022 presentation by Ray McGovern on the weekly “Manhattan Project Meeting” of The LaRouche Organization. Mr. McGovern served 27 years as a senior analyst on Soviet affairs at the CIA. He is one of the founders of Veteran Intelligence Professionals for Sanity (VIPS). The full video is available here. 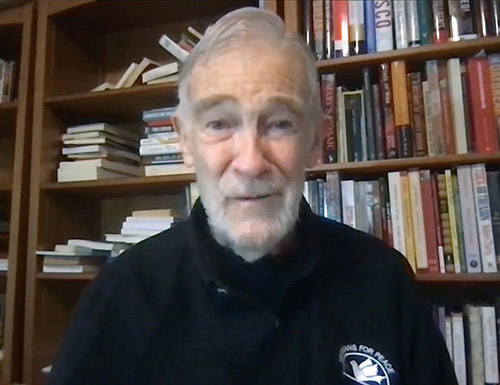 Let me tell you what I think, and why I think it. I should, sort of as a clearness or honesty in advertising, say that I’m an outlier on this, just as I was an outlier for four years on Russiagate and so forth. But I’m used to that. Just so you know what you’re getting.

Watching the pronouncements by official Kremlin spokespeople and the play from these Biden-Putin conversations, and most important, what happened this last week starting on Monday in Geneva, persuades me that we’re on the road to a relaxation of tension: that Putin got a major concession from Mr. Biden, who very cleverly has told his people to play that down, and that talks will continue. I’ll say that again, the Russians didn’t stomp out of the talks, they didn’t invade Ukraine. They didn’t do anything other than to insist on their maximum position, and then sotto voce saying, well we got a big commitment here. We’re going to reinvent the intermediate forces treaty, the INF Treaty.

Most Americans don’t understand this, it happened in 1987, but what was happening in those days was that the Russians had these intermediate and shorter-range ballistic missiles called SS-20s. We had Pershing IIs, the equivalent. This made the strategic situation incredibly tentative, because instead of 30-35 minutes warning from an ICBM shoot-out, you had maybe 14-15 minutes. These were bases in Europe, the European part of Russia, and Germany and elsewhere. Wise statesmen got together and said, this is crazy. We’ve got to limit this. We don’t need this. We’ve already got a balance of strategic power here, thanks to the Anti-Ballistic Missile Treaty of 1972. So, we don’t need these things. Let’s get rid of them.

People like me kind of said, “Right. We’re going to get rid of a whole class of very sophisticated ballistic missiles!” And, they did. One key element there was that it was verifiable. My friend Scott Ritter, for example, was one of hundreds of U.S. inspectors who were there when they blew up these sites in Russia. So, that’s possible, and what happened more recently is not only lamentable, but stupid and reversible [the scrapping of the INF Treaty during the Trump Administration].

Now, be the first to know that U.S.-Russian talks are in the process of getting underway to reverse that, and to reinstate something like the INF Treaty. Will it be exact? No, it won’t, but it will place limits on offensive strike missiles in that part of Europe…. When Vladimir Putin called Joe Biden and says, “Look, our negotiators are going to get together in just 12 days, but I need to talk to you now.” Biden said, “Oh, okay.” And they talked on the telephone, on December 30th, this past year.

How do we know what eventuated?

Well, the Kremlin put out an immediate report, and they said—and I’ll quote it here, because I don’t want to misstate it: “Joseph Biden emphasized that Washington had no intention of deploying offensive strike weapons in Ukraine.”

What about the American side? Well, they didn’t really include that in their read-out. How about [National Security Advisor] Jake Sullivan? I guess he was the senior administration official that briefed all those reporters on background. Well, he said, nothing much happened. …Well, that’s a bit disingenuous, but it’s also clever. Because he didn’t want to give these reporters, who have their own axes to grind, time to criticize what Biden had done.

It’s a mixed blessing that Americans don’t know what Biden had done, but eventually the mainstream media is going to have to deal with it, because those negotiations are in process. We know from [Deputy Secretary of State] Wendy Sherman and [Deputy Foreign Minister Sergei] Ryabkov that they said these arms control issues are going to be pursued now. …

Another straw in the wind, but not really for somebody who follows the media closely: Jens Stoltenberg, the head of NATO, who’s way out there as a hardliner—“our arms are ready for Russia!”: What did he say? Again, you won’t see this reported, but here it is in TASS in English. Reporters can read this. He says, “Concrete possibilities for limits on the missiles of Russia and NATO should be discussed, but not discussed publicly.” He stressed that the alliance was ready to discuss not only limitations, but a ban on intermediate-range missiles. “We have clearly expressed our willingness to sit down and discuss these kinds of limitations on different levels, banning all intermediate-range weapons which are a concern in Europe,” the Secretary-General said.

That’s Stoltenberg! It was missed by the Western press. What am I saying here? I’m saying that if you get through all the propaganda, all the stuff that’s sort of boiler-plate—“The Russians are demanding that Ukraine and Georgia will never become members of NATO.” Is that a realistic prospect? No. How long does it take a country like that to qualify for membership in NATO? Several years, maybe decades, maybe never. If you’re Vladimir Putin, what’s more important to you? To get NATO and the U.S. to sign onto an agreement that says we’ll never let Ukraine and Georgia into NATO? [This,] when as Putin points out, Ukraine is already being populated by all kinds of arms emplacements. In other words, Putin said, membership in NATO for Ukraine may sort of be a distinction without a difference, because what they’re doing right now is moving all kinds of troops and offensive capabilities into Ukraine.

What I’m saying here is this: You have to distinguish between the rhetoric, which is “No, no Ukraine, no Georgia in NATO. And we, NATO, and we, Wendy Sherman, and we, Blinken and Nod and Sullivan, we all stood up to those Russians. We adamantly said, ‘Under no circumstances!’ Win!” Now, Putin was hardly surprised by that. I think he was a little surprised—let’s be realistic—that he frightened Joe Biden with a deployment of—how many, 100,000 troops near the Ukrainian border. And persuaded him that, “Hey, you had a Cuban Missile Crisis which not only bears a resemblance to how we feel now, but is an exact replica. And guess what, Joe? We’re going to react the same way the U.S. did when Khrushchev tried to put those medium-range ballistic missiles in Cuba.”

As an aside, and as an indication of how dangerous this really is: Khrushchev did put those medium-range ballistic missiles in Cuba. We found them finally. The CIA U-2s [spy plane] found them. But guess what? We never thought they were armed with nuclear warheads. And guess what? They were; we found that out decades later. So, just think, if John Kennedy had been more susceptible to the blandishments of our military, they wanted to give Russia a bloody nose, long story short, we might not be here. There’s a good chance we wouldn’t be here today to discuss these things.

Another sort of aside on this, is simply the fact that here’s Putin before all his generals and admirals above a certain grade, it’s the 21st of December; he’s giving them the word, right. And he says, “This time we’re going to have mutually agreed upon, signed, legally binding documents to limit arms.” And he looks out, and he sees—I’m guessing here, I wasn’t there, right—he sees a couple of generals say, “Yeah, right. That was really helpful on the ABM Treaty, wasn’t it? Or, the INF Treaty? We had mutually binding international agreements, and the Americans just walked out, without explanation, for God’s sake. Tell us more about those mutually binding agreements there, Vlad.”

In the next paragraph, Putin says, “OK, the U.S. has not given much respect to mutually binding international agreements.” And he mentions the INF agreement and the ABM [agreement]. So, you know, it will be nice to get these kinds of agreements, but what Putin is interested in, is what happens on the ground. And they’re negotiating on that….

The operative thing I’d like to leave you with is that right now, many of the leading newspapers—that is, the Wall Street Journal, and so forth—are very reluctant to mention that discussions will now take place on intermediate-range ballistic missiles between the U.S. and Russia. Did you know? I ask you, did you know that Biden promised that we have no plans to deploy offensive strike missiles in Ukraine? Did you know that? No, you didn’t know that. Right now, [Putin] is being heard, and there’s a concession on the table from Biden about not doing this in Ukraine. The discussions will go forward.