This is an edited transcript of the opening remarks, as delivered, by Temur Umarov, to the seminar, “The Humanitarian Crisis in Afghanistan: Toward a Long-Term Solution,” co-sponsored by the Russian International Affairs Council (RIAC) and the Schiller Institute (SI) on February 10, 2022. Mr. Umarov is a Fellow at the Carnegie Moscow Center. The full video of the seminar is available here. 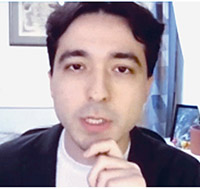 Thank you very much for having me. Thank you for the introductory remarks, and Jim, thank you for your presentation. That was really insightful.

I want to start by saying a very simple thing. The Afghan crisis is very complicated. I don’t think there is anyone inside Afghanistan or outside of it who knows how to solve it, or who can predict what the future is going to hold for Afghanistan, even in the short term. This is, of course, a country that suffered a lot, not only for the last 20 years, but also for the last 40 years or more.

Because of the situation inside of this country, and because of the big involvement of foreign countries in domestic issues of Afghanistan, there is no real instrument or even behavior that Afghan society has created on its own that can enable the country to survive, especially when we are living in very difficult and hectic times today. Let’s not forget that the Afghan people are suffering right now not only with the consequences of political crisis, but also with COVID, with ecological problems that the whole region of Central Asia is suffering right now, and many other issues.

Of course, we can understand the international community that faces a dilemma of, on the one hand, seeing that Afghanistan is in the middle of a crisis, and on the other hand knowing that the Taliban is a fundamental radical terrorist group that came to power, and did so not using some kind of legitimate instruments like voting or anything like that. But came using its power and because it is the only group that can hold onto power in this country.

But on the other hand, we see that the humanitarian situation in Afghanistan is devastating, and it’s not going to get better if the international community and the countries that are involved in the Afghan crisis will not act right now. I’m not saying that pouring money into the Afghan economy can solve all of its problems, but it can really help to get over the humanitarian crisis right now. Actually, if we take a look at this from the point of view of long-term consequences, it can be helpful for the stability in the whole region.

What I’m saying is that if the international community and greater powers will not act right now, and will not push to at least let Afghanistan use its own money that is frozen right now, the humanitarian crisis could get worse, and it can create a lot more problems for all of the countries that are neighbors of Afghanistan and as a consequence, problems for other great powers in Eurasia.

The situation right now seems like a no-way-out route for the Taliban. It at the same time creates frustration inside the government and, as we all know, the Taliban is not a very consolidated group in Afghanistan. They have their own different opinions inside of this group. With the crisis unfolding in Afghanistan, it gives more of an upper hand in making decisions to the more radical parts of the Taliban that do not believe in diplomacy, that do not see the way out of the situation in negotiations with other countries, that don’t want to wait for help from other countries, and want just to rule as the Taliban did in the 1990s, where for a short period of time, the Taliban was in the government.

So, this creates a dilemma, and if there will not be taken any steps to solving short-term problems and crises that we see ad hoc right now, it can, and for sure will, have its impact on the long-term problems of Afghanistan.

But, when we talk about what countries might have influence on the resolving of the Afghan crisis, the first thing that comes to mind, of course, is the big powers like Russia or China. We’re not talking about the U.S. right now, because the U.S. obviously has shown that they’re not interested in being involved in this crisis any more. But Russia and China kind of don’t have any other options. They are living very close to Afghanistan, and they have to do something at least to secure themselves. Actually, that is what they’re doing.

But if we look at what regional smaller players are saying, we will see the difference here in the approach to resolving the Afghan crisis.

Here, I talk about Uzbekistan’s position on Afghanistan, which is a unique one in Eurasia.

Uzbekistan, for a long time, even before the Afghan crisis, has been clear that first of all, it sees Afghanistan as part of Central Asia; that Uzbekistan wants Afghanistan to be involved more actively and dynamically in the economic circles of Central Asia; and that Uzbekistan really wants to see Afghanistan as a stable growing country in any terms, from economic and political development, etc. This is what I think the approach should be from other countries. This is logical; any country when it comes to foreign policy seeks its own pragmatic goals.

I’m not criticizing anyone, but at this moment, except for regional powers, there is no intention from the bigger powers with bigger resources to get involved in resolving the Afghanistan crisis in the long term.

When we talk about the future of Afghanistan, we should not ignore the willingness and the ability of smaller regional countries to be involved in this issue, and we should pay more attention in our analysis to the countries of Central Asia.

If you have any questions, I’d be happy to answer them. Thank you.