This is an edited transcript of the closing remarks of Andrey Kortunov and Helga Zepp-LaRouche to the seminar, “The Humanitarian Crisis in Afghanistan: Toward a Long-Term Solution,” co-sponsored by the Russian International Affairs Council (RIAC) and the Schiller Institute (SI) on February 10, 2022. Mr. Kortunov is the Director General of the Russian International Affairs Council (RIAC) and Mrs. Zepp-LaRouche is President of the Schiller Institute (SI). The full video of the seminar is available here.

Andrey Kortunov: I think that our discussion suggests that the humanitarian dimension of the Afghan situation remains a very important challenge to the international community; and unfortunately, the community is not united on these issues, and it’s not likely that we will have consensus on what’s going on in Afghanistan, and what we can do about Afghanistan. Nevertheless, that should not prevent us from uniting in trying to render humanitarian assistance to the country. I think there are many technical issues here that we have to address, in terms of how this assistance can be rendered, and how the situation in Afghanistan can be managed, without compromising the principles and the demands that the international community might have regarding Afghanistan.

I do believe that it’s important to continue our dialogue. It’s important to keep channels of communications open, and I do hope that specifically, we are talking about the Russian-EU interaction. There are ways to come to some kind of common denominators, of what can and what should be done, in terms of continuing the humanitarian assistance to the country, and a concerted list of demands or suggestions that the international community might have, regarding the Taliban leadership.

In my view, this year is likely to be critical in terms of the ability of Taliban, or the inability of Taliban, to consolidate its power in the country. And my personal conclusion is that any alternative is likely to be worse than the current regime of Taliban: Therefore, it is in our common interests to make sure that Taliban succeeds, not fails. Later on, we can consider other demands or other suggestions that might guide our policies towards the government in Kabul, but for the time being, I think the humanitarian considerations should take the priority above all other considerations that we might have about developments in this country.

I thank you for a very interesting and very provocative discussion that we had today.

Helga Zepp-LaRouche: I agree with you, Andrey, that one has to start with the humanitarian crisis. I, for sure, would not like to live under a Taliban government, but if you think the situation through, the alternatives are all worse, ranging from destabilization, prolonged civil war, more misery for a country where the people have suffered for 40 years, living under war. I can only start to imagine what it means for two generations to be under permanent war. I think we have to start with a very, very, compassionate participation in the fate of the Afghan people, and start with the dignity of the actual sacredness of each human life, and that there is no difference between an Afghan baby and a baby in the United States or in Germany. It’s the love of the parents, and it’s the hope of the future of the country.

So, I think if we start with the humanitarian question first, we then need a twofold approach:

We need first an international mobilization for humanitarian aid, medicine, food—food is medicine in this situation; food shipments must occur; medical supplies must be brought there. We need to build a modern health care system: we have COVID, we have all the other epidemics, so we need hospitals. Operation Ibn Sina is an effort to make partnerships between hospitals in the United States and Europe, and clinics in Afghanistan; to train young people as auxiliary forces for building a modern health care system. That should be the first level.

The second level is, naturally, the building of the economy of Afghanistan, and that can only occur by integrating Afghanistan with the projects that are already in the region, as part of the Belt and Road Initiative. The China-Pakistan Economic Corridor must be extended into Afghanistan through the Khyber Pass, which will connect Afghanistan with its neighbors. The old Pak-Af-Uz [Pakistan-Afghanistan-Uzbekistan] train project must be revived. By building basic infrastructure, electricity, water, and transport, the Afghan people can be helped not to produce opium, but agricultural production. All of that can be done!

We have the help of Pino Arlacchi, who was in 1957 the Executive Director of the UN’s Drug Control Program in charge of fighting opium everywhere, and in 2000, the UN representative working with the Taliban. He said it is quite possible to work with the Taliban. But the international community—if we don’t want to have more dead people from the drug traffic—should help the Taliban to not have opium production, but agricultural production, to solve the hunger crisis. There must be an industrialization of Afghanistan.

I can only say that, rather than despairing about the situation as it is, which is pretty bad, I think we should take this idea of Operation Ibn Sina and actively bring it to the Western countries and appeal to them, to make a step and help. I know that the response to Operation Ibn Sina from the Islamic countries was very strong. We have now requests from people in hospitals in many countries in the region, who say, “We need that same approach. We are in a similar, desperate situation.”

If you look at the movie, Hunger Ward, of children dying in hospitals in Yemen, promoted by World Food Program Executive Director David Beasley, and your heart is not breaking, you are not a human being! I’m really emphatic on that.

So let’s just put our efforts together and really get a whole movement for development. “Peace through Development”—I think that must be our slogan. 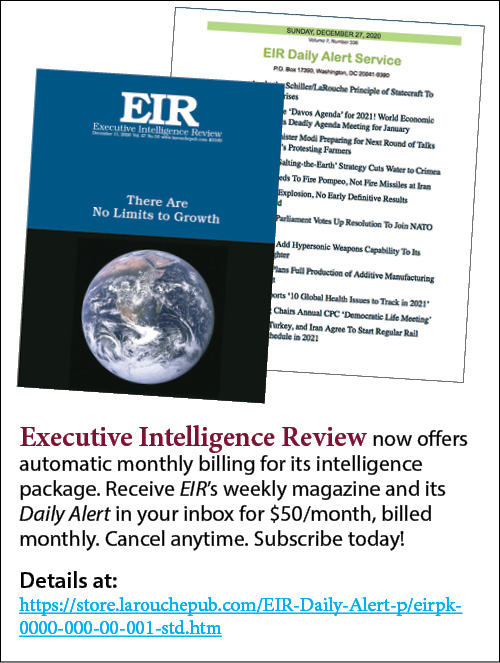