This is an edited transcript of the keynote remarks by Dr. Andrey Kortunov to the seminar, “The Humanitarian Crisis in Afghanistan: Toward a Long-Term Solution,” co-sponsored by the Russian International Affairs Council (RIAC) and the Schiller Institute (SI) on Feb. 10, 2022. Dr. Kortunov is Director General of the RIAC. The full video is available here. 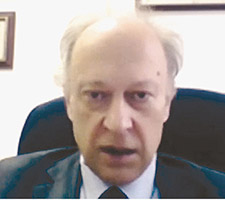 Thank you, Harley. Let me say that we are approximately six months after the Taliban came to power in Kabul, and I think all of us can recall quite vividly all the predictions that were made in August and in September of last year. Some of them turned out to be right; some of them turned out to be wrong. But let me just give you a couple of my observations on what could have happened in Afghanistan, and what actually didn’t happen over the last six months.

First of all, six months ago, there were expectations that the Taliban would probably move towards a more inclusive government, and that after some period of interim leadership, we would see a more representative leadership in Afghanistan, which would include the country’s ethnic minorities, first of all the Tajik minority, but not only. That it would include not only Sunnis, but also Shi’a; and that it would be more gender-balanced. I think right now we can say that these expectations did not come true. And the interim government that was established in September and in October of last year is still in place and it’s very unlikely that this government will change significantly.

So, those who expected that the Taliban would somehow significantly moderate its positions on issues of human rights and gender equality, and other fundamental issues, turned out to be wrong. I don’t think we have any reasons to believe that the Taliban will undergo any abrupt and quick transformation from what it used to be before it took power, to something very different. And I think it’s understandable. If the Taliban were to move away from the fundamental principles of the movement, the odds are that quite soon it would be replaced by other groups which are even more fundamentalist and more radical in terms of how they see the future of the country.

My second observation is related to what Harley [Schlanger] has just mentioned, the humanitarian catastrophe in Afghanistan. And I do recall quite vividly that six months ago there were many speculations that the Winter of 2021-22 would be a disaster; that we would see a lot of people dying from hunger, from the deficit of basic medicines, from the shortages of fuel, and the enlargement of poverty areas. And the country would be sucked into a situation of chaos and disintegration.

I don’t want to underestimate that human suffering in Afghanistan definitely takes place. Definitely there are deficits of food and fuel, and medical care. However, I think that right now, we can say that Afghanistan has demonstrated a significant degree of resilience. Especially when we’re talking about rural areas, especially when we are talking about northern and eastern provinces of Afghanistan that were the most vulnerable in terms of the implications of the change of power in Kabul.

The situation clearly is not bright, and it’s likely to deteriorate further. However, I think it’s fair to say that Afghanistan survived this half-year; and to some extent we can say that things might get slightly better in Spring, with the new agriculture season in place, with new relations with its neighboring countries. So, the situation is difficult, but the situation is not really critical for the survival of the current leadership in Afghanistan.

Neither the supporters of the former leadership, nor the followers of ISIS-Khorasan, nor the al-Qaeda fighters were in a position to question the control of power by the Taliban, and this is likely to stay, at least in the immediate future. So, I think we can argue that the Taliban has been in a position to consolidate its power and really no significant challenges might [arise to] question this situation any time soon.

However, that has not happened. Unfortunately—in my view, unfortunately—the international community is as divided on Afghanistan as it was six months ago. I don’t think we have any consensus on how we should address the Taliban, and how long, or how short the list of our demands to the Taliban should be. So, there are some very, very general common denominators, but nothing really—not a lot beyond these very general common denominators.

And finally, I will probably end with this: Let me say, that there were speculations that probably in half a year we would see a chain of international recognitions of the Taliban; that many countries, starting with neighboring states, but also Eurasian states around Afghanistan would opt for a formal diplomatic recognition of the country, and we would see a kind of, at least, a number of important international players engage into formal negotiations on establishing diplomatic relations with the regime in Kabul.

That has not happened either. I think that now, it’s fair to say that no one is in a rush to recognize the Taliban; no one is in a hurry to establish diplomatic relations with this country with this specific regime; but at the same time, many players—including Pakistan, China above all, but also Russia, and Gulf States, and Turkey and many others—are trying to keep the channels of communications open. They have their own links to the Taliban, which allow them to stay more or less informed about developments in the country.

And finally, and I will end with that: I think that as far as Russia is concerned, the events in Afghanistan should be considered through the lens of the recent developments in Kazakhstan. Because many in this country believe that the crisis in Kazakhstan made that country, and maybe even in a more general sense, the Central Asian region at large, more vulnerable to potential spillover effects coming from the south.

So that creates another incentive for Central Asian countries to work closely with Russia, and arguably with China, on securing their positions and promoting the safety nets in dealing with the potential challenges that might come from the territory of Afghanistan. We clearly see divergent attitudes to Afghanistan from a number of Central Asian states, most notably the disagreements between Uzbekistan and Tajikistan on how we should approach Afghanistan, and the Taliban in particular; definitely these differences will not fade away. And they’re likely to be with us in the foreseeable future.

Let me stop here and let me say that I’m looking forward to a productive and candid discussion of this issue. Thank you.