Stop the Continuing War on Afghanistan!

This is an edited transcript of the presentation by James Jatras to the Seminar, “The Humanitarian Crisis in Afghanistan—Toward a Long-Term Solution,” co-sponsored by the Russian International Affairs Council (RIAC) and the Schiller Institute (SI) on February 10, 2022. Mr. Jatras is a former diplomat and former U.S. Senate foreign relations policy adviser. A full video of the symposium is available here 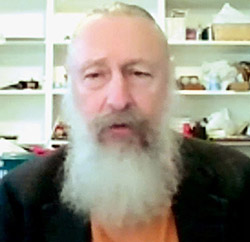 What I have to say is less, perhaps, of a presentation, and more of a commentary and a few observations from what has just been said.

We’re all familiar with the so-called “Pottery Barn rule” that Colin Powell enunciated sometime around the invasion of Iraq: You break it, you pay for it. In a sense, we did pay for Iraq many times over without much of anything to show for it. I think we can say the same thing about Afghanistan in the sense that we put tens of billions of dollars into that country over the years; I think the estimates run up to close to a trillion dollars. What do we have to show for it except for a country that remains broken? One thing that has not really been mentioned here so far is the fact that we’re talking about the state of a country after 20 years of an occupation and civil war following a conquest by the United States and its allies, principally Great Britain, but also then turning into a NATO mission. What do we have to show for it at the end of the day? A broken country.

We can talk about relief, or providing some kind of alleviation of the suffering of the Afghan people, and I think Helga has pointed out a very wise plan about how this could be done if there was an agreement among the major players in the international community. The trouble is, we’re not just talking about a failure to do something good, a failure to provide a relief. We’re also talking about an active attempt to increase the suffering of the Afghan people. Let’s start with the fact that we’ve got something like $9 billion in the Afghan central bank that is frozen. That is Afghan money, admittedly donated by other countries, since the economy of that country really isn’t viable at this point, but nonetheless, it’s money that in principle belongs to Afghanistan. It is not available for any uses there.

Let’s not forget all the military equipment we left behind that we have no idea in whose hands that’s eventually going to fall. I suppose that’s a source of funds for the Taliban if they want to use it. Let’s also keep in mind the question of recognition of the Taliban as the new government. I can understand the hesitancy for countries to do that. If I were to get up in the morning and decide what kind of government I would like to see be in power in Kabul, the Taliban would not be it. On the other hand, that’s what we’ve got. I don’t know if there’s much of a prospect for anything else to take their place after 20 years of trying to put together an alternative order in Afghanistan.

In any case, these are hard decisions that the international community has got to make. But I think we need to look past the individual decisions to see what is the mentality, particularly of the Western powers, that has made such a mess of Afghanistan over all these years.

And it seems to me that there is an element of vindictiveness here, just as we saw in Germany after World War I, with the continuing blockade of that country even after the armistice, and tens of thousands of deaths by starvation as a result. There seems to be a mentality among some Western policymakers that says, “Well, we couldn’t win, but at least we could destroy the country. We can make a total mess of it. We can make sure they can’t reconstruct.”

I think we see this to a great extent in Syria. It’s pretty clear that the government of al-Assad has won the war, but nonetheless, we can’t let go. We can’t lift the sanctions; we can’t stop our efforts to try to disrupt that country and to inflict suffering on the Syrian people.

We need to look at what got us into Afghanistan in the first place, which by the way, wasn’t just a response to 9/11. It had nothing to do with fighting terrorism. It was, as Col. Larry Wilkerson, the former chief of staff to Colin Powell, pointed out, it was geopolitical. It was to insert American forces into the most difficult place on the planet to get American forces into, for geostrategic reasons, above all to disrupt the integration of Eurasia. And to be in a position to do that; especially to give the Chinese a very difficult time in their most vulnerable province, which I guess we shouldn’t name, because that would subject us to censorship on some of the platforms. And this is part of a pattern of how we look at various American and NATO interventions, whether we’re talking about against Serbia-Kosovo in 1999, Iraq, Syria, Libya, and so forth.

Playing these geostrategic games at the expense of the people of the region—that is the object of the military actions and the sanctions and so forth—is really what the root of the problem is, rather than what Helga is proposing, which is a civilized, cooperative way to address the real needs of these regions in a way that does not inflame the overall global situation. I think Andrey’s remarks in a sense presume that kind of good will among the players. And that’s where I think the problem remains.

I just don’t see any kind of indications from Washington, and to a lesser extent perhaps from the Europeans, that they’re prepared to do that. They’re still looking at Russia and China with respect to a zero-sum game of influence; a continuation, if you will, of the Great Game, going back to the 19th Century. Rather than saying, “How do we stabilize this area? How can we do what’s best for the people of this region?” If that means coming to an accord with Moscow and Beijing, that would be a good thing, not a bad thing. I don’t think we’re there yet.

I hope there are lines in Washington that are amenable to seeing Reason, to seeing the demands of humanity when it comes to Afghanistan and other regions. Whether we’re talking about Ukraine or Kazakhstan or other places, the Balkans which shows signs of heating up again, but we’re not there yet. So, I think this conference is an excellent effort to try to put onto the table some productive proposals that help get us from where we are now, to where we should be. But we’re not there yet.

Thank you for inviting me to participate, and I look forward to hearing the other comments.