The Realpolitik That Avoids Human Suffering

This is an edited transcript of the opening remarks, as delivered, by Graham Fuller, to the seminar, “The Humanitarian Crisis in Afghanistan: Toward a Long-Term Solution,” co-sponsored by the Russian International Affairs Council (RIAC) and the Schiller Institute (SI) on February 10, 2022. Mr. Fuller is a former CIA operations officer and an author. The full video of the seminar is available here. 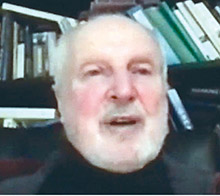 I would just like to say a couple of words in Russian, for reasons that I will explain in a moment. [Mr. Fuller speaks in Russian.]

I opened with those few words in Russian to say that when I was serving as an intelligence officer in Afghanistan, to me the use of the Russian language was really more important than even my reasonable knowledge of Farsi or Dari. And I think this explains a great deal about what is fundamentally wrong with much of the international system, that I was not at all unique in viewing the situation in that way.

So I think this is the first lesson that we need to focus on, as we wish to try to resolve some of these pressing, urgent, desperate problems, even, in Afghanistan, and elsewhere in the world. Many people would say, “Ah well, this is typical. The great powers always look after their own interests, this is the nature of their foreign policy.” But I would question, not that statement so much, as [to ask] the question, “What are the interests of the great powers, or smaller powers in that region?” It’s easy to throw out “the idea of the national interest .”

I guess what I’m saying here, is that we all as human beings need to work on a more humanitarian vision of what the world is all about. You can say, that’s naïve, that it doesn’t consist of Realpolitik. But if you interpret Realpolitik as something that should preserve greater degrees of stability around the world, and avoid conflict and avoid human suffering, then that is, in my view, also, a very powerful form of Realpolitik. How long will the United States feel that it can impose various litmus tests on Afghanistan—or, for that matter, on other countries of the world—litmus tests, before it is willing to cooperate with them? What kind of litmus tests is it imposing, especially on a country that it had helped to destroy, in the course of 20 years of constant warfare in Afghanistan?

In the end, I think we need to have this concept, and I think Helga touched on this considerably as well: A broader and more enlightened view of what the nature of international relations is going to be. It’s unfortunate that from the American perspective, today, at least three of the countries with which America should, and, indeed, must cooperate are officially in the category of hostile, or enemy states—namely, China; namely, Russia; namely, Iran. We might even consider, possibly, Pakistan in this category, although not as much. But, what kind of cooperation can you have, when the three countries that are most intimately involved in this situation, are unofficially viewed as hostile and enemy states, to U.S. interests? I would argue that there is no solution, certainly no humanitarian solution, or even political solution to this problem as long as that attitude prevails.

So far, I see no great change in this regard. The United States is itself undergoing a period of great crisis, domestic crisis—I don’t mean domestic politics, but in accepting the nature of a changing geopolitical world in which the United States is no longer able to fully dominate or dictate or direct the nature of all elements of international relations. This is a very painful recognition for Washington, after some 20, 30, 40, 50 [years], one might even say since the end of World War II, [of the] dominating role of the United States.

It has not all been bad, over that long period of time. But if we go back to, particularly the fall of the Soviet Union or 9/11 for that matter, then this kind of political mentality has increasingly dominated American thinking, American policy thinking, and, indeed, has brought disaster to its own foreign policy in many places in the world: Afghanistan; people have mentioned at this excellent discussion, Syria; Yemen might be yet another consideration where very narrow-minded, narrow interpretations of the American or the international interests are prevailing, instead of a broader vision of a more humanitarian—but more than humanitarian—that’s idealism—a more stable world, in which conflict and war are not so present, and the risks of confrontation are far less.

I don’t think those are idealistic goals. I think those are extremely practical, national interests not only of the U.S., but of Russia, and China, and European states, and others as well, as we look into the future.

I think I’ll leave it at that. Thank you.