Evaluation of the Strategic Situation:
A French Perspective

The following is the edited transcript of the presentation by Alain Corvez to Panel One of the Schiller Institute conference, “100 Seconds to Midnight on the Doomsday Clock: We Need a New Security Architecture!” on February 19, 2022. Col. Corvez is an international consultant and former Counselor for the French Defense and Interior Ministries. 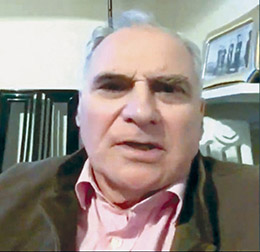 I first want to say that I agree with the two speakers [Harley Schlanger and Natalia Vitrenko] who talked just before me. I want to stress the fact that we are at a very specific point in the evolution of humanity.

The crisis of Ukraine is the result of the end of the American supremacy in the world. I don’t want to remind everybody; you are perfectly aware of the change in the equilibrium between the nations at the end of the U.S.S.R. in 1991. This was a great moment, and we can say that starting from this moment, the hubris—the Greek word for egoism—of the United States started, and they thought that it was their duty to lead the whole world.

This was obviously a great mistake, but we can understand that at this time this thinking was possible because there was no other bloc able to balance the power of the United States. But since then, years have passed, and we have seen now that more and more nations are saying to the United States, “We don’t agree with the way you want us to be, and we have a different pattern of way of living, and now we are powerful enough to say what we want and you have to listen to us.”

I will sum up very quickly, but the kind of agreements that Vladimir Putin and the Russian administration sent to Washington in December, said now it was not possible to go on like this with your nuclear missiles on all our border from the north to the south. You have put nuclear warheads all over our borders, and this is not acceptable for our security. We suggest, said the Russians, that we sign a treaty to come to a new equilibrium between different nations, especially between you and us Russians. We should accept and sign a paper saying that we’ll never threaten each other. This was not written in the treaty suggested by Russia, but in the historical presentation of the treaty, it more or less says that.

The different treaties that the U.S.S.R. and America have signed together [in the past] have not been accepted by the United States. Now, we need the written acceptance of this treaty. If you don’t agree with that, we will have to take military and technical-military decisions, because we cannot accept anymore to have your missiles directed to our country.

That was the indication by Russia, together with other countries, because we have to understand also that Russia is not alone. Before sending this paper to Washington, some days before, President Putin met with Narendra Modi from India and with Xi Jinping from China. That means that these countries agree for a new multipolar order, and this paper from Russia is a proposition for a multipolar order. It is very reasonable, and it should be acceptable by all the nations of the world, because it suggests that nations are not to threaten each other. On the contrary, they are to cooperate together, which is the main project of the Chinese Belt and Road proposition, the New Silk Road.

This is the future and the destiny of humanity: to stop nations threatening each other and to create a world of cooperation. As General de Gaulle said also in Mexico in 1966 when he spoke at the University of Mexico, but actually was talking to the whole world, saying the future of humanity is there—the nations have to cooperate, and the stronger nations have to help the less-strong nations. This is a very important thing.

I want to remind that the [1990] agreement was only an oral, verbal agreement made in London between the Western bloc and the collapsed U.S.S.R. with Gorbachev, with the new CEI [French acronym for Commonwealth of Independent States—ed.], the new Russia. They promised not to expand NATO towards the east, and especially [to] Poland and the Baltic countries. Now, we know a very important German newspaper has just published three days ago the proof of these promises which were made to Gorbachev. This is new information which Der Spiegel has given three days ago. That’s very important also, because these documents show that these promises were written on a paper, and that is very important. But, as everybody knows, these promises have not been executed.

I think the current Ukrainian situation is [due to] the fact that the United States did not know how to answer the exigence of Russian security matters, and they decided to launch propaganda which took a wide range, especially in Europe and France in particular. We have seen only the scenarios which were made in Washington, and all the Presidencies, all the media repeated the false information which was coming from Washington. They decided that because they did not know how to answer the legitimate demands from Russia, they said Russia wants to invade Ukraine. Even if Putin and other persons—Lavrov, Shoigu—said they have no intention to invade Ukraine, the lies were going on saying the contrary.

End of NATO and American Supremacy

In my opinion, this is the end of the American supremacy, because they need to have supremacy over Europe. If Europe by chance comes to cooperate with Russia, which is a very big country and especially for all the energy resources, of course this new Eurasia group of countries would be independent from the United States. Then, we understand that NATO, which was created to face the communist world, when the Warsaw Pact was defeated—collapsed—then NATO should have been also defeated.

Then, there is no reason now for NATO to go on and to have all these European countries and others in Asia obeying Washington’s strategy and policy. We have seen that NATO has gone to Afghanistan, to Iraq, and to other countries, to Libya and so on. Destroying completely countries without any reason, because NATO was supposed to be an alliance to face the communist bloc, and when there is no communist bloc, there should be not be any more NATO.

I want to finish my speech by saying that we are in the presence of a very big moment, because I think the crisis about Ukraine will show the world the end of the American supremacy. Of course, it will not be tomorrow; but it’s a sign that now the world does not accept anymore the supremacy of the United States over all the world. Especially I think for my country, France, and for all European countries, the truth is that NATO has no reason anymore to exist and that we should leave this organization which is a war organization for the interests of the United States.

The interests of the United States are no more to lead the whole world, but they have the dollar. The dollar is now threatened by other currencies, and that’s also why the Ukrainian crisis is also an economic crisis, because the United States wants to preserve its supremacy with its currency, and this is not anymore possible.