Imran Khan’s Proposal for Pakistan
To Mediate Between the U.S. and China

The following is the edited transcript of the presentation by Shakeel Ahmad Ramay to Panel 2, of the Schiller Institute conference, “100 Seconds to Midnight on the Doomsday Clock: We Need a New Security Architecture!” on February 19, 2022. Mr. Ramay, a political economist, is the director of the China Center at the Sustainable Development Policy Institute in Pakistan, and a frequent columnist for numerous journals and newspapers. 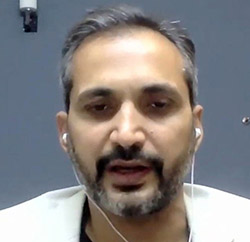 Hello everybody! Good morning, good evening, and good afternoon to everybody!

Before digging into how Pakistan would be mediating between China and U.S. and the second question: Will it be possible this time, to mediate between China and the U.S.? Let’s look at the history. We have to look at the history, because Pakistan is the only country which had the experience of mediating between China and U.S. in the 1970s. At that time, Pakistan was a formidable world economic power. So, the world was uniting behind Pakistan as an emerging country and an emerging economy at that point of time. Pakistan since then consolidated that position in the global arena.

Number two: At that time, the U.S. wanted to exploit the situation in its favor. In the late 1960s there were several differences between China and the U.S.S.R. At that time, the U.S, thought it would be good if they could use this in its favor. They wanted to create a rift between China and U.S.S.R. So, the U.S. thought it would be a good time to work with China, to use the differences between U.S.S.R. and China and make China an ally. So, it would be good to isolate U.S.S.R. at the global level. So that was the start of the process to the reconciliation with China. And for that purpose, the U.S. requested Pakistan to come forward and mediate between two countries.

Number three: . There was another point. At that time, the difference between the economic size of China and the U.S. was huge. If we look at the economic status of U.S.S.R. [then], it was also not very much comparable to the United States. So, at that time, the U.S. did not have any serious competition, or cutting-edge competition from any countries, including the U.S.S.R. and China. So, the U.S. was thinking, it would be good to forge a partnership and there would be no competition to the U.S. in the long term. So in that context, Pakistan was asked to mediate between them. At that time Pakistan had a conference with the U.S. and a conference with China. Pakistan started a process of the reconciliation between the two countries. Pakistan had made the effort to mediate. And this mediation was successful. After that, China and the U.S. started to work together.

Now, we come to the present. The context is entirely changed.

Number three: Russia has also re-emerged on the global stage, as a big economic power, moving on the global level. After the turmoil of disintegration, it has been quickly recovering. And they have good relations with the regional countries, and especially with China.

So, the whole context has changed. In this context, Pakistan’s situation has also changed. At that time, Pakistan was a good economic power, it was an emerging economic power. Right now, Pakistan has been entangled in different issues, including the debt trap, by the IMF, World Bank, and the international financial institutions. Economic indicators are very weak. Pakistan is looking to enhance its growth and sustainable development. Pakistan is looking to international cooperation, to revive its economy. And Pakistan is part of CPEC (China-Pakistan Economic Corridor), which is a major corridor of BRI (Belt and Road Initiative).

So, the whole context has changed. In this context, will Pakistan be able to mediate? We have to look into that deeply.

Number one: Pakistan and China are friends. Pakistan and China trust each other. But the problem is the United States. The U.S. is dead set against China and is pressing Pakistan to leave the BRI and CPEC. If Pakistan were to leave CPEC and the BRI, there would be differences and a rift between the two countries, China and Pakistan. Then, how would Pakistan be able to mediate between China and the U.S.? If Pakistan does not leave—and definitely Pakistan will not leave CPEC and the BRI, and Pakistan will not end its brotherhood with China. So then how will the U.S. accept it? The U.S. will not accept it.

Both parties have their own differences. I think that in this context, it would be difficult for Pakistan to mediate between the two countries. Especially when the U.S. is not ready to compromise on its demands, including that Pakistan leave CPEC and the BRI. And it’s a competition, not only that, but it has also become a conflict with China. Because making this a trade conflict has been given high standing in the Biden administration.

So in this context, it has become very difficult for Pakistan to mediate between the two countries. But there are some chances. The chance arises from the Belt and Road Initiative. Because the Belt and Road Initiative (BRI) is an economic opportunity for the whole world; it is open for every country. More than 140 countries and other global institutions have signed up with the BRI, the most recent being Argentina.

So, it is a global initiative that has something to offer to every country. Even the World Bank has mentioned that if the initial parts of BRI are implemented successfully by 2030, there will be a gain of $1.6 trillion in the social welfare of the people. That is a huge gain! If the full project is completed in the coming years, then you can imagine how great the benefits of this project will be. And these benefits are open to everybody. And the U.S. will also benefit from it, if the U.S. were to become a part of the Belt and Road Initiative.

It is an open secret now that the U.S. economy is facing problems; its debt is increasing. It doesn’t have the money to spend on its people. It is apparent that during the COVID-19 episode, the U.S. had to print money. It did not have the resources; it had to print the money, which has had global implications for the world.

So, if the U.S. wants to reverse this situation, the United States needs new economic opportunities. The best source of increased revenue available at this point in time is the Belt and Road Initiative. Because it is a global initiative; it is open; it is equality-based; and it offers benefits to everybody. There are no conditionalities that you have to follow to become part of the BRI. There’s only one condition. You need to be welcoming to every type of economy, of every nation, in the world.

So, the United States can benefit. Unfortunately, the U.S. thinks that it is only a Chinese initiative and only China will benefit from it. No, that’s not true. It is open for everybody. That’s why.

But nobody has yet convinced the U.S. on the point that it is open for everybody, that it is not about China, that it is about the world. So, the U.S. has proposed its own initiatives, like the Build Back Better program. They are also coming up with other programs. So in this context, I think it will become most difficult to benefit from opportunities presented by the BRI that are very open for everybody. So, the U.S. has to rethink. And rethink about its strategy to counter the BRI, to not conquer the BRI.

The U.S. has to become part of the BRI. Then Pakistan will be in a better position to mediate between the two countries. Because on the Earth, Pakistan is the only country which has experience in mediating between China and the United States.