The following is the edited transcript of the presentation by Dr. Natalia Vitrenko to Panel One of the Schiller Institute conference, “100 Seconds to Midnight on the Doomsday Clock: We Need a New Security Architecture!” on February 19, 2022. Dr. Vitrenko is the leader of the Progressive Socialist Party of Ukraine. 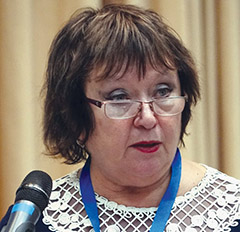 It is very important that our conference is taking place in a period of heightened confrontation between two blocs of leading countries in the world. These are the NATO countries, led by the U.S.A., and the other bloc, which is taking shape before our very eyes, is Russia and China, whose joint declaration of February 4 of this year proclaimed their intention to be together on all issues. This is extremely important, because mankind is on the brink of World War III. And the knife’s edge of that confrontation is my country, Ukraine.

Essentially, this is what we warned about. Let me remind you about my intervention at the European Parliament on February 26, 2014. That was during the tour by representatives of our party, which I believe was very important for the international community, when we visited Germany, France and Italy. Our friends from the Schiller Institute helped us organize that trip. At that time, I said at my press conference that the coup d’etat in Ukraine in 2014 had brought to power Nazis and Russophobes, and that this would give rise to extremely grave problems not only for Ukraine, and not only for the Eurasian continent, but also for the entire world.

And indeed, from 2014 on the U.S.A. started strongly sponsoring Ukraine and preparing a confrontation with Russia. What other interpretation can there be, of the fact that since then $2.7 billion of lethal weaponry has been allocated? What other interpretation can there be, of orienting the government of Ukraine not toward a peaceful solution of the crisis—toward finding ways, through diplomacy, to resolve this bloody conflict in southeastern Ukraine, in the Donbas—but, rather, constantly instigating them towards war with Russia?

We have witnessed a special kind of militaristic psychosis over the past two or three months, since last Autumn. As I understand it, the U.S.A. gave the go-ahead to all of their satellites, so not only they themselves started pouring an absolute avalanche of weapons into Ukraine, but also [so did] the Baltic countries, and Poland, and Canada, and the UK—all of them, disturbed about what was happening in Ukraine—suddenly started, supposedly for the purpose of defending the sovereignty and territorial integrity [of Ukraine] against Russia, to ship to Ukraine more and more and more weapons.

I emphasize that these are not gifts to our country! This involves loans. The latest loan came from the U.S.A., with credit guarantees of $1 billion. Great Britain allocated $2.5 billion, or $2.3 billion, to be precise. More than half a billion from Canada; 1.2 billion euros from France. Where are these to be repaid from? How can they be repaid? All this is a yoke, it’s shackles on our people.

But that’s not even the main thing. The most important is that, while the Ukrainian economy is destroyed, our people serve simply as cannon fodder. The Western mass media constantly hammers away: When the war with Russia begins, the Ukrainian side will suffer losses of 50,000, or 85,000.

What is that? That is such heavy pressure on our country, on our people! That is an extremely hard psychological attack on the state of mind of our public, that it’s absolutely unbearable. It’s simply unbearable. So, what is happening in our country with the population, is a very difficult process: People are packing emergency “go-bags,” trying to locate bomb shelters, organizing local-area defense militias.

And it is, without question, a blow. When President Zelensky saw all this, a month ago, even he was dumbstruck, because Ukraine has lost $14 billion just from the beginning of this year; $12.5 billion from capital flight, and $1.5 billion spent by the Ukrainian Central Bank to support the currency. And, let me stress: Ukraine’s gold and currency reserves were less than $30 billion. And here you have $14 billion in losses.

There’s been a collapse of our eurobonds, of Ukrainian state debt. There’s a collapse of the national currency, as I already mentioned, and a blockade on international capital—international capital markets are closed to Ukraine. An outflow of investment. And this has all happened, literally, in the past few weeks. The National Bank of Ukraine has already adjusted downward its GDP forecast from 3.8% to 3.4%.

What’s Next: Inside Ukraine

What will happen next? In our country, people lack resources even for the basic necessities. Today it was announced that the price of bread will soon be raised by 25 or 30 percent. And that’s when we already, because of brutal pension and wage policies, have the most impoverished population in Europe. The shortest life-span.

This is what comes from the efforts to set our countries against each other. And that’s when Russia has repeatedly stated that they have no intention of invading Ukraine. They are doing their military exercises on their own territory. But the Western media, the U.S.A. and the UK don’t listen to that. Even when Russia reduces the number of its troops near the border, pulling them back to their bases as the exercises finish up, it continues. They say: “No, we don’t see any de-escalation process; no, we don’t trust what Russia says.”

What is the purpose? That war take place, without fail.

Who is igniting the bonfire of war, from inside Ukraine and from the outside?

Inside Ukraine, it is the Nazis, first and foremost. All these organizations have burgeoned: parties, movements, organizations, thirsting for blood. They have an ideology called Ukrainian integral nationalism. This ideology was created by [Dmytro] Dontsov and [Mykola] Stsyborsky [in the early 20th Century], and then implemented by Stepan Bandera and [Roman] Shukhevych. This is an ideology of enmity between our peoples. It is an ideology of war, misanthropic war. This ideology of a Nazi Ukraine has infected a section of the population of our country. Worst of all, this ideology has become the official ideology of the Ukrainian government, just as we warned.

As a result, people with Russian culture, members of ethnic minorities, have become second-class people. Look at me: I’m ethnically Ukrainian, but my native language is Russian. I don’t conceive of myself, outside of Russian civilization.

But all broadcasting of Russian TV channels, and all broadcasting of programs in the Russian language, has been banned in Ukraine. The courts, government agencies, schools and universities work only in Ukrainian. And we have the constant fanning of the psychosis: that the “Muscovites” must be destroyed. This is said openly, on television.

What’s Next: Outside Ukraine

And since that’s the case, Western “democracy” should have supported democracy in Ukraine. But that means people’s power and the will of the people. Read the Declaration of State Sovereignty. Look at what our population voted for. Remember that it was that kind of Ukraine that the international community supported. That was the kind of sovereignty that was recognized as the sovereignty of Ukraine. It included non-bloc status (neutrality) for Ukraine. It included a Union State with Russia and Belarus.

If we had had a Union State, there would have been no problem with Crimea. Crimea would have remained the favorite child of both Ukraine and Russia, rather than being an object of contention.

Therefore today it’s important to realize what must be done, in order to change the situation radically and not allow a war. I’ll divide this into two parts: what Ukraine must do, and what the international community must do.

What Ukraine Must Do

The top priority for Ukraine is to carry out denazification. What’s needed is to help the Ukrainian government, with united efforts by the entire world community, to ban all parties, movements and organizations with a Nazi orientation. There are sufficient international norms and principles for doing this. I’ll just name the [United Nations—ed.] conventions, which enable the international community to help Ukraine in this respect.

They are the Convention on the Prevention and Punishment of the Crime of Genocide, and the International Convention on the Elimination of All Forms of Racial Discrimination, and the International Covenant on Civil and Political Rights. It’s all spelled out there: a ban on war propaganda; a ban on the functioning of organizations that take a position of racial discrimination—on the basis of race, ethnicity, or any other criteria. That’s what needs to be done in Ukraine. It is of outstanding importance for Ukraine. And it has to be understood that without the following, Ukraine will not survive: after denazification, the restoration of our non-bloc status, and allowing us to implement what was the expressed will of our people—a Union State with Russia and Belarus.

What the International Community Must Do

As for the international side, what needs to be done? Of course, we passionately hope and pray, that Russia and China together will be able to convince the U.S.A., and Germany, to sit down at the negotiating table and work out a new world architecture—to find those principles, validate them and put them at the basis of some documents, which provide the possibility for peaceful coexistence of different countries with respect for their national interests and distinctive characters.

And, of course, we need to change the economic model, the world economic model. We remember how Lyndon LaRouche explained to us, that without a radical change in the economic model, there will be no sustained development, and it will be impossible to defend the national interests of different countries. This is what all progressive humanity has to strive for. And that is the position of our Progressive Socialist Party of Ukraine.

Thank you very much for listening.