The following is the edited transcript of the presentation by Alejandro Yaya to Panel 2, of the Schiller Institute conference, “100 Seconds to Midnight on the Doomsday Clock: We Need a New Security Architecture!” on February 19, 2022. Mr. Yaya serves as Vice President of Argentina’s Civil Institute of Space Technology, an NGO, and heads up the Technology and Innovation Relations Unit of the National Defense University. He has worked extensively in training youth in advanced science and technology. 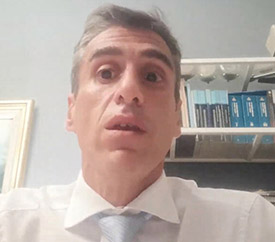 Good afternoon. I’d like to thank the Schiller Institute for the invitation to speak to you today. It should be noted that the presentation that I am going to make does not represent the Argentine state, but it is a true report on the agreements and activities that began with the recent visit of our president, Alberto Fernández, both to the Russian Federation and the People’s Republic of China.

I will report on concrete facts about Argentina’s bilateral relationship and its joining the New Silk Road, and I will explain what kind of investments will occur in the field of infrastructure in general terms, and strategic infrastructure. I will also comment on what issues Argentina should take into account in order to promote and take advantage of this new beginning of a bilateral relationship which, just to be clear, already had the beginnings of opportunities, but which were not acted on as rapidly as they should have been.

On the issue of rail infrastructure, one of the strong points of these agreements that are being carried out has to do with the rehabilitation of the Argentine rail system, in particular the one known as Belgrano Cargas. Likewise, for the rail network of the San Martin line, and that of the Roca line. This includes a modernization plan for the rail networks. The funds to be used will purchase rolling stock from Chinese companies, and to improve the network. This will extend to works that will benefit cargo activities in 13 provinces of the Argentine republic….

Just to give you an idea, the branch lines to be improved that I mentioned, will be restored and we will reestablish trade and cargo transport routes, but in a different way. They will run both north-south, and also east-west.

There is part of one project that should have gotten off the ground in early 2020, which is known as the Pacific Branch. That branch is defined by the idea of the Belt and Road, and was adapted to Argentine needs by the Chinese side. Just to give you an idea, we are talking about a project, including the first section and related works, with financing of some 800 million dollars.

Another important aspect of President Fernandez’s visit to the Russian Federation is related to this matter of railroads. In this context, it is likely that our relations will also be strengthened by Russian production of railroad locomotives and cars.

Likewise, there are agreements related to hydroelectric plants in Santa Cruz. I’m referring to the Nestor Carlos Kirchner hydroelectric complex. It is being negotiated by the government of the Province of Santa Cruz. China has already sent some $1.35 billion out of a total of approximately $4.714 billion projected to complete the project. It’s important that when the project is completed and it enters operation, that that is when the credit repayment arrangement begins. In this case, our President will have to reach an agreement to extend and improve the payment terms.

There are also projects under consideration for other hydroelectric plants, in the provinces of Tucuman and Catamarca.

Another part of the deals, and I believe this will be of great interest to the Schiller Institute, is the nuclear chapter. I’m happy to report that work will begin on the Atucha nuclear plant, on the third Atucha nuclear plant. What is being purchased is a Hualong plant, based on enriched uranium and light water technology. This is different than the nuclear plants we now have in Argentina, which are based on the Canadian CANDU system of heavy water and natural uranium. Nonetheless, although there has been some controversy about this, it is the case that Argentina will be trained in this new kind of technology, which is important, because it is something we lack. China is using this Hualong technology to strengthen its nuclear plants, because there are only two of this kind in the world and this would be the third plant of this kind.

What I would like to be clear about is that Argentina should not give up its natural uranium line, or the CANDU system, but develop this new one as well. We are already working on the fifth nuclear plant—I’d like to correct myself on this: the Chinese plant will be the fourth plant and there will another CANDU one which will be the fifth. There are other projects related to nuclear energy.

Another important issue is that Argentina has a historic opportunity. In all of these projects that I’ve mentioned, the Peoples Republic of China is open to transfer of technology and exchange of knowledge. What Argentina obviously should do is to pressure and ask for it in concrete and specific areas.

On the issue of space and telecommunications, these are also important—very important—chapters of the agreements which we have reached. We should mention the agreements that are being reached with Huawei for the construction of 5-G technology infrastructure. It’s also important here that professional groupings and entities be involved in establishing the standards and measures to be adopted in our country.

I should mention that, in our search of 5-G technologies, there haven’t been any counter-offers from other countries, such as the EU and the United States. The same holds for almost all the fields that I have mentioned. As regards industrial production for the 5-G network, the Xiaomi company will build a plant to produce computers and related technology in the province of Tierra del Fuego.

That too is an historic opportunity to improve our supply capabilities in the goods producing and technology sectors.

What’s pending, what’s important: What, in my view, has to be promoted and developed?

When you read the joint statement issued by the Argentine embassy and the People’s Republic of China, you see that the agreements and the relationship are comprehensive. That means, they range from science to technology, but also cover the details of trade and cultural exchanges.

And if there is one comment that I have to make—because from my work and professional standpoint, we are fighting for this—the cultural aspect must include exchanges at all technical levels of applied scientific knowledge. That is, agreements between Argentine universities and research centers with their equivalents in the People’s Republic of China.

I will give you a concrete example, which I would emphasize, and which should not only be a matter of interest for Argentina, but I believe also for the concert of nations of the world. I will speak about the area that I come from—civil engineering—and refer to China. If you look at the last ten years, in terms of infrastructure projects involving civil engineering: the longest tunnel, the biggest bridge, the greatest hydroelectric plant, the most rapidly built building, etc.—it’s clear that they are being developed and executed by the engineering schools of the People’s Republic of China. The Chinese are no longer copying the technologies of others, as was said of them in the past, but they are generating their own technologies, producing their own patents, their own innovations. And all of this in the field of culture, and specifically technological culture.

What this expresses, and I think this is very important: That Argentina should not remain asleep in this regard, and take advantage of the potential of learning.

It’s also important to state—for example, when I mentioned the nuclear matter—that Argentina has knowledge and has capabilities. So, our contribution—remember that Argentina has also sold and marketed in the nuclear field through INVAP, which is another very important institution in our country related to science and technology, and we are able to build scientific reactors in China. In other words, our relations are currently win-win.

I hope that this presentation has been useful, and I thank you for your attention.