No, Putin Is Not Exaggerating

Neo-Nazis in Ukraine
Have Threatened Zelenskyy

Feb. 26—Russian President Vladimir Putin’s announcement that the neo-Nazi problem inside Ukraine must be dealt with, is taken by Western media—if mentioned at all—as hyperbole meant to be fed to the ignorant Russian masses. Certainly, for Western audiences who associate Nazis with those who think males should not use women’s bathrooms, or with those who think a pandemic is not a matter of personal choice, it may be hard to appreciate Putin’s deadly serious military objective. The neo-Nazi Banderites, beyond the ugly ideology, have actually hijacked the country of Ukraine and have set nuclear powers into a showdown.

In February 2014, the LaRouche movement broke the story in a dossier published in EIR, “Western Powers Back Neo-Nazi Coup in Ukraine.”

On February 21, 2022, when Putin announced the recognition of the Donetsk and Luhansk Republics, he was clear as to what the neo-Nazis had done, and what Russia intended to do about them:

The nationalists who have seized power have unleashed a persecution, a real terror campaign against those who opposed their anti-constitutional actions. Politicians, journalists, and public activists were harassed and publicly humiliated. A wave of violence swept Ukrainian cities, including a series of high-profile and unpunished murders. One shudders at the memories of the terrible tragedy in Odessa, where peaceful protesters were brutally murdered, burned alive in the House of Trade Unions. The criminals who committed that atrocity have never been punished, and no one is even looking for them. But we know their names and we will do everything to punish them, find them and bring them to justice.

However, less well-known in the Western media are the threats, violence, and blackmail directed toward Ukraine’s President Volodymyr Zelenskyy, had he attempted a move to implement the Minsk measures for peace. There’s a reason the clearly articulated steps of the 2015 Agreements have been so blatantly ignored.

Of a Jewish background, and speaking Russian as his native language, Zelenskyy won a surprising election victory in 2019. His vote of 73%, a landslide, represented the majority of both Russian and non-Russian speakers in Ukraine. He was a fresh hope to end the Russia-baiting and the divisions pitting Ukrainians against each other.

However, while the Ukrainian army was prepared to respect the mutual pullback of forces in the Donbas, in October 2019, Andriy Biletsky’s National Corps mobilized a “No to Surrender” campaign, including a 10,000 person strong demonstration in the Maidan. Rather than pull back, Biletsky had “irregular” forces enter the Joint Forces Operation (JFO) zone illegally and threaten violence if the Ukrainian regular army pulled back.

Zelenskyy described on Facebook how he went to the town of Zolote, near the line of contact, and met with the locals: “I understood one thing—how everyone wants peace. Everyone is ready for disengagement.” However, the villagers told him that armed “irregulars” occupied part of the village. (The JFO would confirm that the “irregulars” indeed were armed and had entered the zone illegally.) Zelenskyy then met with the “irregulars.” They refused to listen either to the directions of the elected head of state, or the military chain-of-command.

Zelenskyy posted a video of his confrontation with a National Corps leader, Denys Yantar. First, Zelenskyy is surprised when two elderly women intervene, bravely calling out Yantar’s irregulars over their hidden weapons. Yantar, reportedly a marksman in the first infantry corps of the Azov Battalion, then denied having any weapons. After Yantar’s evasions, Zelenskyy confronted him: “Listen, Denys, I’m the president of this country. I’m 41 years old. I’m not a loser. I came to you and told you: remove the weapons. Don’t shift the conversation to some protests.”

Yantar tried to sidestep, dismissing Zelenskyy’s order: “But we’ve discussed that.” At which point Zelenskyy moves up close to Yantar: “I wanted to see understanding in your eyes. But, instead, I saw a guy who’s decided that this is some loser standing in front of him.” This was Zelenskyy’s high-water mark. 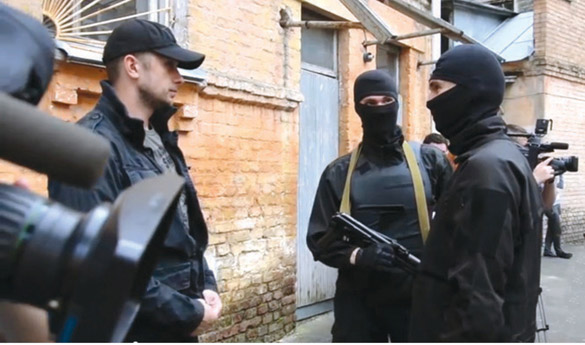 Biletsky responded by publicly threatening Zelenskyy. His armed grouping would not stand down. If Zelenskyy tried to remove them, Zolote would see armed irregulars by the “thousands there instead of several dozen.” The Kyiv Post coverage includes the video of the confrontation between Zelenskyy and Yantar. Of course, the Kyiv Post refers to the armed irregulars simply as Army veterans, to whom Zelenskyy spoke without proper respect.

The education of Zelenskyy, as to who ran things in Ukraine, did not stop there. The farthest that he would ever get toward fulfilling his election mandate was a couple of months later, when he attempted to put forward his first piece of legislation related to the Minsk Agreements on the Donbas. Even though it watered down the Agreement’s mandatory provision for full amnesty, it still allowed one element, whereby Donetsk and Luhansk could vote as to whether they should keep the Russian language. (Over half of Ukraine’s population speak Russian, and both languages had been used in schools and government until the 2014 coup.) Yet, this proved too much.

Sergey Sivokho, an adviser to the head of Ukraine’s National Security and Defense Council, whom Zelenskyy had assigned to create a National Platform for Reconciliation and Unity, was physically assaulted at the initial public conference, March 12, 2020, on the reintegration of Donetsk and Luhansk. Sivokho, an older man with white hair, was cursed, surrounded, pressed against a wall, and finally shoved to the ground by Azov Battalion members. A short video shows the last few seconds of the assault. Apparently, that was the first and last time that even a hint of the Minsk Accords was promoted by the Kiev government.

These are just a couple of the examples, but it seems that Zelenskyy received the message—one delivered by those who worship Hitler’s wartime ally, Stepan Bandera, those who sport the swastika-inspired insignia of the Azov Battalion, and those who espouse the rage-driven, “blood and soil” ideology of “far-right nationalists.” It is not simply an ugly phenomenon. They have more control over Ukraine’s policy than the elected government, and so have hijacked Ukraine. And it is clear, when Putin speaks of history, of when the West looked the other way during Hitler’s rise to power, and of the failure of the Soviet Union when its leadership delayed dealing with the Hitler problem in 1939/40, that he has no intention of allowing the loss of tens of millions of his countrymen.