The following is the edited transcript of the presentation by Wang Wen to Panel Two of the Schiller Institute conference, “100 Seconds to Midnight on the Doomsday Clock: We Need a New Security Architecture!” on February 19, 2022. Dr. Wang is Executive Dean and Professor of Economics at the Chongyang Institute for Financial Studies (RDCY), and is the Deputy Dean and Professor of the Silk Road School at Renmin University. 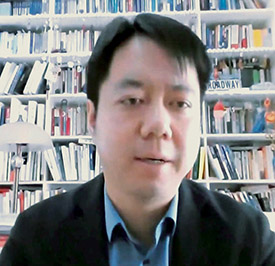 My name is Wang Wen, Executive Dean and Professor of Economics at Chongyang Institute for Financial Studies, Renmin University of China. Many thanks to Mr. Bill Jones and to the Schiller Institute for inviting me to share some views on the China-Russia Joint Statement.

Two weeks ago, I gave an exclusive interview to Russian media Eurasian experts on this topic, which attracted a lot of attention in Russia. I’d like to review again the three viewpoints I presented in that interview:

First, China and Russia have now entered a new era. On Feb. 4, President Vladimir Putin visited China to attend the opening ceremony of the Winter Olympic games. He has met with China’s President Xi Jinping 38 times in the past nine years. During this most recent meeting, they signed the Joint Agreement of the Russian Federation and the People’s Republic on International Relations Entering a New Era and the Global Sustainable Development. They also signed 15 China-Russia cooperation agreements. On the eve of his departure for Beijing, President Putin wrote an article, for Xinhua, the Chinese News Agency, titled “Russia and China: A Future-Oriented Strategic Partnership.”

As we all know, Feb. 4, the fourth day of the Chinese lunar new year, is also the beginning of Spring in the Chinese Lunar Calendar. It is also the day of the opening ceremony of the Winter Olympics. President Putin thanked his Chinese host in various ways; writing, attending, making statements, signing contracts, interviewing, and so on. As President Putin mentioned in his Xinhua Agency article,

We highly appreciate that Russian-Chinese relations of comprehensive partnership and strategic cooperation, are entering a new era. We have reached an unprecedented level and have become a model of efficiency, responsibility, and aspiration for the future.

That these two major countries can trust, cooperate, and be efficient, is a blessing for their two peoples and for the world. In his article, President Putin wrote:

A mutually beneficial energy alliance is being formed between our countries. Along with long-term supplies of Russian hydrocarbons to China, we have plans to implement a number of large-scale joint projects.

I think this is a very important statement. The statement of “a mutually beneficial energy alliance,” has significant implications for China’s energy industry. China and Russia will increase their cooperation faster based on that energy alliance. The promotion of economics and integration in the Eurasian region will continue to deepen.

The belief is that with the disappearance of COVID-19 and the efforts of the two countries, the new goal will probably be achieved faster than we can imagine.

The Joint Agreement states that Russia and China intend to also work within the framework of the Eurasian Economic Union (EAEU) and the Belt and Road Initiative (BRI) to “promote greater interconnectedness.”

As we know, China has signed Belt and Road Initiative cooperation Memoranda of Understanding (MOUs) with 148 countries and 32 international organizations. The BRI has now become the largest importer of products in the world. And the EAEU and BRI have achieved win-win results, being the largest and most influential relationship in the BRI global cooperation framework. So, this is the first point I wanted to share.

According to Chinese netizens, the two countries trust each other, completely handing over their unprotected backs to each other. When they wield a gun against a foreign enemy, neither will worry about an enemy attack from behind.

The two countries are not traditional allies; but they are better than allies. We hope that the relationship of mutual trust will last forever.

The leaders of China and Russia strive to make the two countries realize friendship, and are never at war or conflict, which will be great progress in the history of human civilization and a gain between the two great powers.

To achieve this goal, we must first make the infrastructure—trade, transportation, investment, personnel, and information—of the two countries more interconnected, so that the two countries can help each other and make common progress, like a family.

From this perspective, the cooperation of the two countries still has a long way to go, but we are confident. That’s the second point I wanted to share.

First, expanding the common values of China and Russia on strategic topics, such as democracy, development, security, world order and the pandemic. These common values are of great significance to peace, civilization, and progress.

It transcends the law of the rise and fall of great powers over the past 500 years. China and Russia have strongly criticized the actions of a small number of international forces that presume unilateralism, interfering in the internal affairs of other countries, damaging the legitimate rights and interests of other countries, and creating contradictions, differences, and confrontations. My friends, you know which country is being criticized.

Of course, the only sentence in the statement that uses strong condemnation refers to the trilateral security partnership established by the United States, Britain, and Australia, the so-called AUKUS. A Chinese netizen, jokingly called AUKUS “Australia cries to death.” Very interesting.

A very famous journalist in China named Hu Xijin—I don’t know whether you know him—used a very interesting and funny metaphor that I want to share with you: “The cooperation between two lions is more effective than one lion attracting several dogs!” [laughs]

So, those are my three views. Thank you again for the invitation.