by Paul Gallagher and Claudio Celani

So when the big inflationary “sanctions shock” hit all commodities from March 4 on, and the availability of crucial food, energy and mineral commodities began to be cut off, the trans-Atlantic financial system had already been on fire with inflation created by the major central banks to preserve the biggest private banks and fortify them against the coming debt bubble collapse.

In the biggest field for the spread of that fire, the U.S. housing market, the roaring inflation cannot be attributed to any effects of the war in Ukraine or NATO’s economic warfare against Russia. But this market, notorious in the 2007-08 global crash, is inflating toward another collapse, alarming officials of the Federal Reserve. The median new home price went over $500,000 in March, just one year after it had, for the first time, gone over $400,000; the median existing home sale price, following along, has reached a record $405,000. The average U.S. monthly mortgage payment in mid-March was higher than one year earlier by a shocking 28% ($330) according to the U.S. National Association of Realtors; even the median mortgage payment is up 22%.

The big U.S.-based banks have escalated the interest rate on a 30-year fixed-rate mortgage from 3.25% to 4.95% in two months—up 0.5% in the week of March 21 alone. Consequent to these events, home sales and pending sales of all kinds have been dropping steadily since the Fall of 2021, as homes become increasingly unavailable and unaffordable for most households. In addition, average rents across the country are reported up 14.9% in a year, and are very widely securitized through the big financial firms which own tens to hundreds of thousands of single-family homes each. 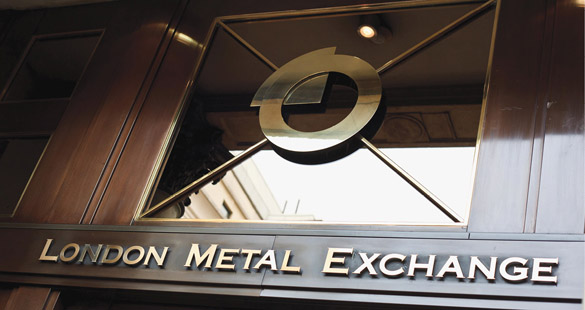 CC/Kreepin Deth
Liquidity became so scarce in commodities markets from the second week of March, that the London Metal Exchange has been unable to function at all.

Regarding energy prices in Europe, this roaring inflation created by central bank money-printing and derivatives speculation had already doubled and tripled energy prices well before the war.

The biggest central bank, the Federal Reserve, is now clearly worried about having lost control of what one of its governors, Christopher Waller, on March 19 called “raging inflation.” Three governors or regional presidents—Rafael Bostic of Atlanta, Georgia; James Bullard of St. Louis; and Waller—are calling for multiple rate increases of 0.5% in each of the Federal Reserve’s next few meetings, panicked because their current planned increases have no chance of slowing the inflation. At the same time, the governors and regional presidents all are estimating a marked slowdown in U.S. economic growth; and in fact, the economy is falling at least into recession.

With this prelude, the hyperinflationary shock which propagated from the week of Monday, March 7 blew most of the liquidity out of the sphere of producing, distributing and trading the many commodities indicated above. A payments crisis exists among many thousands of companies in these sectors, and clearly affects their banks. No less a bank than JPMorgan Chase, the biggest in the United States, was expressing in the following week, through its global commodities chief, great anxiety about the bank’s exposure as a counterparty to all these firms. Lending in these sectors has effectively stopped.

Bloomberg News headlined on March 18, “The World’s Biggest Commodities Markets Are Starting To Seize Up.” The European Federation of [the world’s largest] Energy Traders on March 16 asked the central banks to provide “time-limited emergency liquidity support to ensure that wholesale gas and power markets continued to function.” The letter from the likes of Shell, BP, and Trafigura said it was “not infeasible to foresee generally sound and healthy energy companies … unable to access cash.”

Shortages of vital commodities are everywhere, and those caused by NATO’s attempt to crush Russia’s economy are cross-feeding with those, such as fertilizers, which were already spreading because of raging inflation before Feb. 25. Those commodities in greatest shortage are hyperinflating in price. The UN Food and Agriculture Organization’s world Food Price Index has risen well higher than either of the peaks which triggered famine threats and mass protests in developing countries in 2008 and in 2011-12.

The phenomenon of “self-sanctioning” by large numbers of companies in Europe, North America and Oceania of Russian energy products which are not under any government sanctions, has made that term into a meme. It is producing shortages in the countries which are out to crush Russia. Business Insider on March 21 quoted a bank commodities trader estimating Russian oil exports to Europe are actually down by 1.5 million barrels per day (bpd) despite being unsanctioned, for example. On March 22 a Washington Post analysis of “self-sanctioning” estimated total Russian oil exports were down by 2 million bpd. The International Energy Agency (IEA) says Russian oil exports will drop by 3 million bpd over the course of 2022.

When the West sanctions the single-largest commodity producer of the world, which sells virtually everything, the following is going to happen: Non-Russian commodities are getting more expensive because of the new scarcity; traders need to borrow more but is there enough collateral around? Nevertheless, we are going to see a pattern of margin calls on those who went long on non-Russian commodities and short on the related futures.

What we are seeing at the 50-year anniversary of the 1973 OPEC supply shock is something similar but substantially worse—the 2022 Russia supply shock—which isn’t driven by the supplier but the consumer.

A default on Russian debt would unleash margin calls on credit default swaps, whose price has increased so much that it is no longer convenient for Russian creditors. However, a feared default of Russian government debt seems to be excluded. According to the Institute of International Finance, quoted by The Guardian, the Russian state has about $40 billion in foreign currency bonds denominated in dollars and euros. Moscow is currently able to service that debt, as it demonstrated by paying $117 million due March 16 and $66 million March 21.

Foreign debt of Russian corporations is a $75 billion question mark. Such bonds have already been repriced by the market at a 70% haircut; i.e., with a loss of about $50 billion. Wall Street On Parade wrote March 7, “The Big Question on Wall Street Is Which Banks Owe $41 Billion on Credit Default Swaps on Russia.”

After President Putin signed the bill on bond payment in rubles, CDS prices for Russian debt skyrocketed. To insure $10 million of 5-year Russian debt now requires a down-payment of $5.8 million plus $100,000 per year, according to ICE Data Services quoted by Bloomberg News. Financial institutions are already losing on that debt as counterparties in CDS.

Pimco, one of the world’s largest investment managers, is exposed both as owner of Russian bonds as well as a counterparty in CDS contracts. Precisely, it owns more than $1.5 billion in Russian Federation bonds and at least $1 billion in derivative bets that the country would not default. If Russia defaults, Pimco will directly lose over $2.5 billion at least, but it could suffer a wave of margin calls and investors’ flight.

You have the makings of a replay of the 2008 banking crisis when banks backed away from lending to each other because they didn’t know who would fall next from toxic subprime exposure. That led to a liquidity crisis and the unprecedented involvement of the Federal Reserve secretly pumping trillions of dollars into the megabanks on Wall Street and their foreign derivative counterparties.

On March 11, the Financial Times published the list of the most exposed Western banks, using data from the Bank for International Settlements. Total exposure is given at $121 billion, with the largest chunk being in the hands of European banks with $84 billion, with Société Générale on top of the list ($21 billion), followed by BNP Paribas ($3 billion), Credit Suisse ($1.7 billion), Deutsche Bank ($1.5 billion). Among U.S. banks, Citibank is the most exposed with $10 billion. “Given Citigroup’s history of understating its subprime exposure during the financial crisis of 2008, that $10 billion may not be the whole story,” the authors commented.