Israelis Call the Bluff on the Zelenskyy ‘Hero’ Myth

March 24–Beginning March 8, with an address to the parliament of the United Kingdom, Ukrainian President Volodymyr Zelenskyy has been on a virtual tour reciting scripts appealing to parliaments around the world to militarily support Ukraine against the Russian military. The intention of his controllers is to influence these lawmakers by using his crude acting skills to attract a sympathetic public to the side of continuing the doomed war against Russia–in fact, to launch World War III against Russia and probably also China and others. The message is 100% in line with the disinformation campaign of the Anglo-American led war-mongers. In most cases, the leading political figures and media outlets have amplified Zelenskyy’s message without communicating the slightest doubt of his honesty and commitment. The “minor” but honest media have challenged the message to some extent, but the harshest questions among the leading national media have come from Israel.

Zelenskyy won the 2019 election by a landslide, running as a “peace” candidate, pledging to end the war in the Donbas and make peace with Russia. He was immediately confronted by the neo-Nazi Azov Brigade, and told that he would face a new coup or assassination if he compromised with either the self-declared republics in the Donbas or with Russia. He backed down, and now does what he is told by the Nazis, who tell him what MI6 and the CIA instruct them to say.

While the U.S.-UK “rules-based-order” has for the most part prohibited any mention of the Nazi elements in the Ukrainian military and militias, the British Daily Telegraph, an over-the-top supporter of the coup, on March 18, headlined a story on the Azov Brigade: “Inside Azov, the neo-Nazi brigade killing Russian generals and playing a PR game in the Ukraine war.” 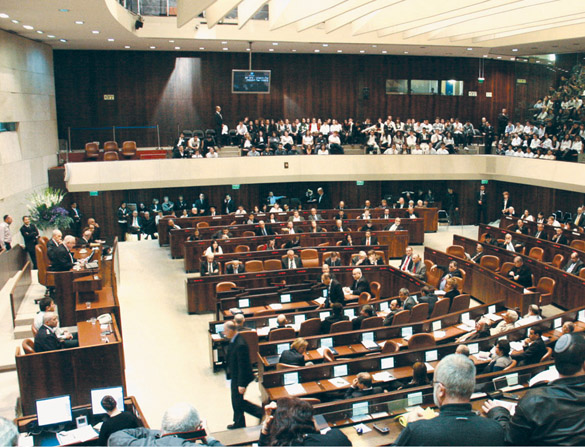 Ukraine Presidency
In his address to the Israeli Knesset on March 21, Ukrainian President Volodymyr Zelenskyy (right) engaged in “trivialization, distortion, and denial” of the Holocaust.

Ofer Aderet and Liza Rozovsky reported in a Haaretz article, “Ukrainians Saved Jews in the Holocaust? Fact-checking Zelenskyy’s Knesset Speech,” on March 21 that Zelenskyy told the Knesset: “Listen to the words of the Kremlin. They are using the terminology of the Nazis…, the ‘Final Solution’ to the Jewish question, you well remember. Listen to what they are now saying in Moscow. Now these words are being used again, the Final Solution, but now it is directed at us, on the issue of Ukraine. They are speaking about this openly on official sites and in the media.”

This was too much for the Israeli daily newspaper, Haaretz, which posted the obvious “fact-check,” reporting that it found no evidence of Putin or his allies reporting a “Final Solution” of genocide against Ukrainians. The authors also reminded Zelenskyy that the Nazi Holocaust deliberately killed millions, including approximately 1.5 million Jews in Ukraine, whereas the civilian deaths in the Ukraine crisis are in the hundreds.

Zelenskyy also told the Knesset: “The Ukrainians made their choice 80 years ago. We saved Jews, and therefore we have among us ‘Righteous Among the Nations.’ The people of Israel, you now also have a choice to make.”

The Haaretz authors responded that it is true that there were 2,673 non-Jewish Ukrainians identified as the “righteous,” who prevented the killing of Jews. But they point out what Zelenskyy did not say—that there were tens of thousands of Ukrainians who helped bring Jews to the Germans and participated in the slaughter.

It is also true that the most active elements of Ukraine’s military today proudly wear the Nazi badges and tattoos, building monuments to Hitler’s Ukrainian partner Stepan Bandara, and reciting the litany of those genocidalists. 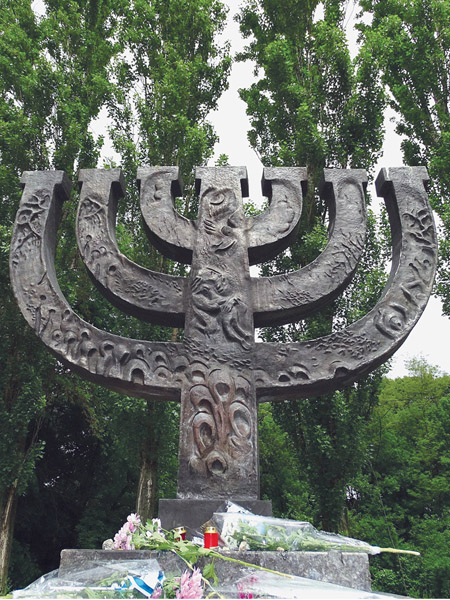 The article also notes that Zelenskyy lied that Russia had bombarded the shrine at the site of Babi Yar in Ukraine, where Germans and their Ukrainian allies slaughtered tens of thousands of Jews in 48 hours in 1941, one of the most horrendous scenes of Nazi genocide. The staff at the memorial site told Haaretz that there was minor damage done to a nearby building, but that the monument had not been damaged. The authors add, “it is believed that the likely target for the strikes was not Babi Yar, but the nearby television tower.”

On March 24, The Jerusalem Post published, “My Word: Zelenskyy’s Misfired Speech,” by the editor of its international edition in her weekly op-ed column, declared that Zelenskyy’s appeal for assistance showed no understanding of his audience. She begins saying:

When Ukrainian President Volodymyr Zelensky addressed the Knesset by Zoom on Sunday, he opened his mouth and shot himself in the foot…. Instead of wooing more Israeli support, Zelenskyy seemed to be turning Israel into the enemy.

Collins noted that she and most Israelis were on Ukraine’s side, but added:

We don’t need a history lesson from Zelenskyy, and we don’t need false comparisons to the Holocaust. Or a reminder that when Israel has been attacked by would-be invading armies, we have nowhere to run. MKs [Members of the Knesset] from the mainly Arab Joint List, by the way, boycotted Zelensky’s speech…. Thankfully, the MKs were muted. I have no doubt they would have had what to say. Watching in my living room, I also found myself at times infuriated by the tone and words of the Ukrainian leader and was talking back at him.

In regard to Zelenskyy’s praise of the Ukrainians who helped the Jews without mention of the far larger number who joined the Nazis, Collins writes:

He should have rewritten his speech rather than tried to rewrite history. Saying the Ukrainian people saved the Jews in the Shoah is not Holocaust denial, but Holocaust perversion.

The Times of Israel chimes in with a blog post, “Zelenskyy is Not a Jewish Hero,” by Jesse Edberg, described as a Religious Zionist Party youth. Edberg writes:

…[I]n his address to the Knesset earlier this week … The speech was a disaster for Zelenskyy, perhaps the turning point for his global perception. In front of Knesset lawmakers and ministers, Zelenskyy equated the Russian invasion to the Holocaust, denied Ukrainian involvement in the Holocaust, and, confusingly, urged Israel to treat Ukrainians the same way Ukrainians treated Jews in the Holocaust (Ukrainians made up much of the SS’ volunteers and lent their land to the building of many of Hitler’s concentration camps). The speech was roundly lambasted nearly unanimously by the Knesset, Arabs and Jews, coalition and opposition.