This article appears in the April 8, 2022 issue of Executive Intelligence Review.

March 31—In this proposal, “Concern for Universal Peace,” three Greek ambassadors reflect on Ukraine, Europe, and the world, and make a body of recommendations in order to establish peace and stability. It was drafted by three senior retired members of the Foreign Ministry of the Hellenic Republic and is now receiving broad coverage in the Greek media, including New Crete radio and TV, which broadcasts nationally. Their proposal, in Greek, is available here. 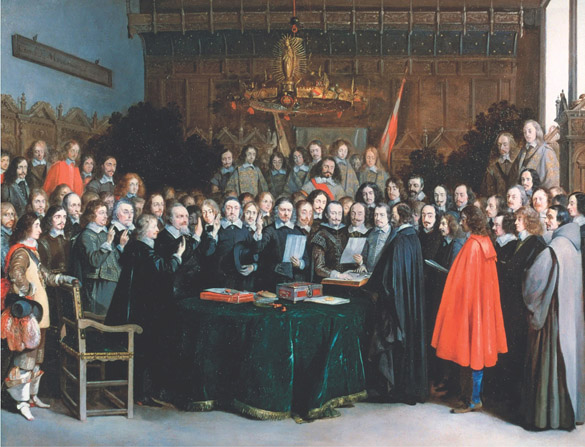 “The Swearing of an Oath of Ratification of the Treaty of Münster,” by Gerard ter Borch. The treaty was a part of the Peace of Westphalia, ending 150 years of warfare in Europe. The two greatest principles agreed to by all sides were that each “shall endeavor to procure the Benefit, Honor, and Advantage of the other”; and that there be a “perpetual Oblivion, Amnesty, or Pardon, of all that has been committed since the beginning of the Troubles.”

What has been happening the last month in Ukraine is inconceivable for us and for reasonable people. We thought that the old “Westphalian” world, having experienced an “age of the extremes,” had learned its lesson and realized that the path to a durable peace and prosperity is not through a “clash of civilizations,” but rather through globalization of values, markets and finance. Modern statehood has not yet arrived at “the end of history,” but rather has to face contemporary challenges such as economic inequality, ethnic and religious differences in other continents, climate change, and the pandemic, in a spirit of friendship and cooperation.

Regretfully, there are many risks and threats in front of us. The past is not dead, it is still more than a fragment of memory; and the future threatens to return to “hell” and violence.

On February 24th, we abandoned the utopia of a peaceful normality and found ourselves in a world “sleepwalking” toward war. Once again, we became witnesses of violence as Russia attacked Ukraine; fire and steel were again the main instruments for solving differences among states, whereas reason would provide a just and lasting solution. In the meantime, we are experiencing a tremendous loss of human life, destruction of property and a standstill of production in agriculture and industry. The implications of the situation are unforeseeable.

For the first time in many years, Europe and the rest of the world are facing the threat of hunger and nuclear annihilation.

The price of the war is, for Ukraine, for Russia, and the world, enormous.

Much damage has been done, but it is not too late to act to avoid the worst. The weapons can be silenced, and the survivors can mourn their dead.

It is time to see reality and talk about the future. After serious deliberation, we decided to put forward the following proposals in order to achieve peace, cooperation and security in the world.

An immediate cease-fire must be agreed upon among the combatants; this is a precondition for the success and implementation of our proposals. Our proposals are specified as follows:

1. Negotiations should be conducted at two levels:
NATO-Russia
Ukraine-Russia

2. Negotiations between Russia and Ukraine which are already under way, should deal with the following issues:

a. The withdrawal of Russian armed forces from Ukraine;

b. The territorial issue;

d. The implementation in good faith of the Agreement between Ukraine and Russia concerning truce and cease-fire will be guaranteed by military observers from member-states of the OSCE that are not member-states of NATO;

e. It is essential to stop the exchange of accusations between NATO member-states and Russia, so that a climate of confidence could be restored.

3. Negotiations between NATO and Russia will cover the following issues:

a. Cooperation and indivisible security;

b. Restoring the NATO-Russia Council;

c. The parties should officially confirm that they do not consider each other as enemies;

d. Prohibition of the use of nuclear weapons;

e. Restricted use of land-based intermediate or long-range missiles;

f. Agreement on non-expansion of NATO;

g. If an agreement between Russia and Ukraine is reached, all sanctions will be lifted.

4. Restarting of the EU-Russia Cooperation Council and further rapprochement between Ukraine and the EU within the framework of accession procedures.

We hope that these proposals are likely to lead to a phased de-escalation of the conflict. It is our firm belief that in the absence of an agreement, a dramatic deterioration of the situation will ensue with striking consequences both for the region and for humanity as well.