This article appears in the April 8, 2022 issue of Executive Intelligence Review.

THE SPIRIT OF BANDUNG

by Karel Vereycken and Mike Billington

kremlin.ru
Joko Widodo, President of the Republic of Indonesia.

Now that Russian nickel faces sanctions, Indonesia could be in for a windfall as buyers compete for a scarcer resource. Unfortunately for Indonesians, their government has banned nickel exports.

This is hardly “unfortunate” for Indonesia, as the Heritage Foundation essentially admits:

Indeed, President Joko Widodo, speaking at the 7th Anniversary of the Indonesian Solidarity Party Dec. 22, 2021, addressed his country’s policy regarding all mineral resources:

[Indonesia] will make a significant leap if we have the courage to industrialize and downstream our natural resources. For decades, we have always exported our raw material and we must stop it.

If we produce finished goods, it will generate ten times the added value. Nickel, for example, can result in many products. Nickel and copper can become lithium batteries … for electric car batteries … and many other products….

Regarding nickel, we used to have a trade deficit with China. I have learned that in the last three years the value of our exports has increased significantly…. Next year it is possible that we will have no trade deficit with China. Instead, we will record a surplus. That is because of the nickel. If we stop exporting bauxite, exporting copper, exporting tin, exporting gold and other raw material exports, we will get more. I fervently believe that if we do this until 2023 and 2024, our gross domestic product (GDP) in 2030 will triple.

This ambition of Indonesians to lead the way to becoming a modern industrial nation should not be surprising if one knows the history of Indonesia, which hosted the 1955 Bandung Conference, bringing the formerly colonialized nations of Asia and Africa together without their colonial masters, a key moment in the rise of the non-aligned nations’ movement. The Indonesian refusal to simply want to survive on raw materials clearly marks a desire to further emancipate itself from Western geopolitics.

Another concern of the Heritage Foundation is that Indonesia’s nickel production is in the hands of the Tsingshan Holding Group, “a firm at the heart of China’s Belt and Road overtures in the region.” Repeating the lies of the collapsing Western financial oligarchs, they claim this will leave the country “geopolitically vulnerable. Dependence on exclusive Belt and Road links, rather than access to the panoply of buyers on an open global market, will weaken Indonesia’s hand as China threatens its territorial sovereignty at sea.” 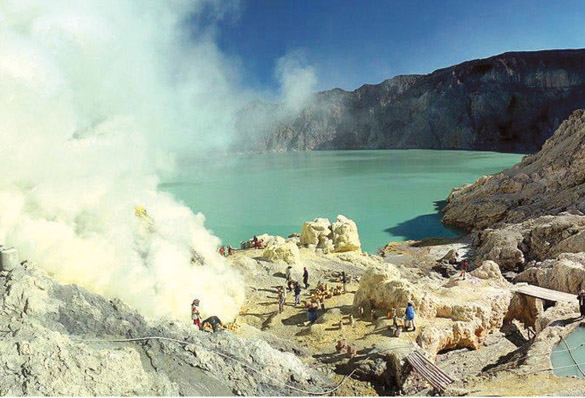 EU: You Have No Right to Your Raw Materials

The response from the EU to Indonesia’s ban on nickel exports, which began on January 1, 2020, was more extreme—and even more revealing of the West’s refusal to give up their former colonial privileges. The EU requested the establishment of a panel at the World Trade Organization to seek the elimination of what they call “unfair and illegal advantages” created by Indonesia’s ban on nickel ore and iron ore exports. “These measures illegally restrict access for EU steel producers to raw materials needed for stainless steel production.” said the EU, as reported in Asia Times. Imagine, our ungrateful former colonies think they have a right to their raw materials!

President Widodo first took on this battle against the neo-colonial control over the nation’s resources during his first term (2014-2019), by forcing the partial nationalization of the massive gold and copper operations of PT Freeport Indonesia. In 2018, state-owned PT Indonesia Asahan Aluminium (Inalum) took a 51.2% controlling interest in the Freeport’s Grasberg mines in Papua, one of the world’s most profitable gold and copper mines. He then went to work demanding that Freeport build a modern smelting plant, threatening to ban the export of the unfinished cooper.

In October 2021, Freeport-McMoRan began construction of a $3 billion copper smelter in Gresik, East Java, to be completed in late 2023 or early 2024. The new facility will be one of the largest in the world, producing 1.7 million tons per year of copper concentrate. Coordinating Minister of Economic Affairs, Airlangga Hartarto, told the groundbreaking ceremony that the new smelter will also have an output of 600,000 tons of copper cathode and include a $200 million precious metal refinery, with output capacity of up to 54 tons.

Indonesia chairs the rotating presidency of the G20 this year. The war party in the West is placing massive pressure on Widodo to exclude Russia, with President Joe Biden and Prime Ministers Scott Morrison and Boris Johnson all issuing demands to keep Russia out. Thus far, President Widodo has asserted Indonesian sovereignty, and sanity, by insisting that Russia has every right to attend, and needs to attend if the G20 is to accomplish its goals. Dian Triansyah Djani, special staff to the Minister of Foreign Affairs, announced at a press briefing on March 24: “It is the obligation of the G20 Presidency to invite all members.”

The return of this “Spirit of Bandung” is indicative of the paradigm shift underway globally, as more and more countries in Asia, Africa and South America are seizing the opportunity offered by China’s New Silk Road, the Belt and Road Initiative, to distance themselves from the exploding Anglo-American financial system, and to finally become modern industrial nations.