For a Europe of the Fatherlands with the Peace of Westphalia

This is an edited transcript of the remarks of Alessia Ruggeri to the Plenary Session of the Schiller Institute’s April 9, 2022 conference, “Establish a New Security and Development Architecture for All Nations.” Ms. Ruggeri is a spokeswoman of the Comitato per la Repubblica, and a trade unionist (Italy). 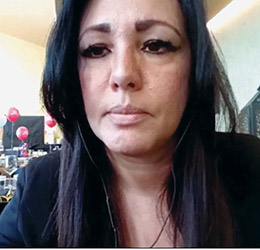 Right now, the world is suffering from a bad lack of democracy, trust and increasing confusion. Citizens no longer recognize themselves in political institutions and there is no longer trust between states themselves.

In an increasingly connected world, we witness increasingly fragmented societies and the erosion of democracy in the West.

As an Italian, I experience the nightmare of being subjected to political choices that I believe are detrimental to the security of my country and to the achievement of the peace we all desire. I have witnessed appeals for peace, addressed to Russia, by our political leaders, while they were at the same time sending weapons to Ukraine. Even among the humanitarian aid, at the airport of Pisa, they have discovered clandestine weapons, and the airport trade unions refused to load them on the planes.

Invoking peace, while at the same time sending weapons, is like trying to put out a fire by throwing gasoline on it.

The Draghi government has decided to allocate 2% of GDP for the purchase of weapons and to align itself totally with the EU choices. This is while in our country companies are closing down and for years there has been no investment in research, in schools, in hospitals and in the real economy.

As a trade unionist, I represent thousands of small entrepreneurs throughout the country who had to close their businesses. And while the Italian Parliament approves the sending of weapons to Ukraine, which violates our Constitution, the large majority of Italians, as shown by polls, are against rearmament, and hope instead for an economic policy that will promote employment.

It is necessary to make a distinction between the real economy and the financial one—the financial one represents the speculative bubble that moves the great ones of the Earth and that has nothing to do with the citizens. The real one is us, the enterprises that are the backbone of the economy.

As for the foreign policy of our government, and unfortunately also of the other European governments, it seems that everyone has forgotten the promise made by the NATO member states, after the fall of the Berlin Wall, to then Soviet leader Gorbachev, in which they undertook not to expand even an inch further east than Germany.

We had to even witness that the leaders of the NATO member countries repeatedly denied this agreement, and were obviously refuted after that.

Also, the trilateral agreement of Minsk was deliberately not respected and buried before Putin recognized the two separatist republics.

I had to shamefully witness the following statement of an Italian daily: “Ukraine-Russia war: When killing Putin is the only solution.” I did not see any statement of outrage for this call to assassinate Putin and not even for the massacre in Odessa in which 48 people were burnt to death including a pregnant woman.

I welcome with great enthusiasm the call of the Schiller Institute, to establish a new security and development architecture for all nations, inspired by the Peace of Westphalia.

The Peace of Westphalia put an end to thirty years of bloody warfare between Catholics and Protestants.

In a delicate moment, it is necessary to take as reference the model of the Europe of the Fatherlands, of de Gaulle, and the Peace of Westphalia.

Someone called the General a “saboteur,” attributing to him the will to hinder those who worked for European integration.

On the contrary, de Gaulle was a convinced Europhile, but he rejected the creation of supranational structures that would lead to federalism. In fact, today we can say that the European Union has deprived, over time, each member state of its sovereignty.

The Europe of the Fatherlands wanted to be a force that stood autonomously between the United States and the Soviet Union, and not a Europe resulting from the progressive loss of sovereignty of the States. In short, a Europe independent from the Atlantic and the Soviet blocs, able to take decisions independently.

On this day I want to remember two Italians, the Mayor of Florence, La Pira, and Pope John XXIII, when in the 60s they helped to create a bridge between East and West to preserve peace. And invoking that spirit and the encyclical Pacem in Terris, I address myself as did the Pontiff to all men of good will, invoking a World of Peace without blocs.

A Europe of the Fatherlands with the Peace of Westphalia is not a utopia, but a project that should inspire anyone who truly wants peace.

I would like to thank once again the Chairwoman of the Schiller Institute, Helga Zepp-LaRouche.