This is an edited transcript of the remarks of Ambassador Anatoly Antonov to the Plenary Session of the Schiller Institute’s April 9, 2022 conference, “Establish a New Security and Development Architecture for All Nations.” He is the Ambassador of the Russian Federation to the United States. 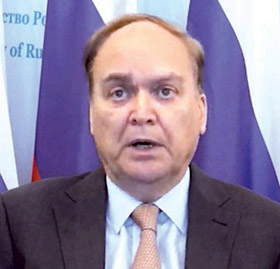 I would like to thank the Schiller Institute and its Chairwoman, Ms. Helga Zepp-LaRouche, for the opportunity to share my view on the prospects for establishing a new security architecture.

Over the past hundred years, the system of regional and global security has been re-tailored three times. Following World War I, the victorious countries shaped a European order—but it lasted only 20 years.

World War II gave rise to the establishment of a system of international relations that reflected the balance of power and was based on the maximum consideration of national interests. Perhaps, the founding of the UN with the fundamental role of the Security Council, and reliance on international law, were its core elements that united all nations.

Nevertheless, the Cold War divided the world. A psychological, ideological, and economic war was waged against the Soviet Union. We were branded as an “evil empire” and a source of constant global tension. The task pursued by the West was to stifle the development of the Soviet Union, prevent the transfer of advanced technologies to us, and doom our country to be a second-tier nation.

The third attempt to form a world order was made after the dissolution of the USSR. The United States and its allies declared themselves the Cold War’s winners and began to reshuffle international relations to suit exclusively their interests. In fact, it was at that very moment when the basis for the infamous “rules-based order” was laid. In the new environment, an increasingly diminishing role was given to the UN and other international institutions, unless they were controlled by Washington.

But even in such a reality, the new Russia made an attempt to meet the West halfway. We were excessively open and credulous. We proposed new cooperation and interaction projects. We demonstrated our readiness to compromise, making unforgivable concessions in some cases. The West cynically took advantage of such a constructive approach. It hypocritically tried to point out that from that point on, Russia’s place was on the outskirts of the “new world order.”

The Warsaw Pact disappeared, but NATO was not going to disband. Moreover, over recent years the world has witnessed five waves of the Alliance’s expansion. Its military machine is, in fact, on our doorstep.

Lately, NATO’s military activity has considerably intensified. About 40 major military exercises are held annually near Russian borders. The forces of the North Atlantic Alliance are exploring the Black and Baltic Seas. By the way, according to the latest estimates of the Stockholm International Peace Research Institute, the combined military expenditures of NATO countries exceed Russia’s defense budget by at least 25 times.

For decades now, the West has been cool with the dismantling of the collective security system developed after World War II. We have lost key global security agreements: the ABM [anti-ballistic missile —ed.] Treaty, the INF [intermediate-range nuclear forces —ed.] Treaty, and the Open Skies Treaty. In fact, the only agreement left today is New START that continues to meet the national interests of Russia and the United States. It is the “gold standard” for strategic stability which must be preserved.

The Russian side finds totally unacceptable the efforts of NATO countries to militarily explore the territories of Ukraine and Georgia and establish a network of American biological laboratories along our borders.

The situation has become extremely dangerous. We have repeatedly said that any system of European security must take into account the national interests of all states, including, of course, Russia. Our country cannot be an object of some phantom defense projects. We must be an equal party of European and global security with full voting status. Russia has never insisted on any unilateral advantages. All we have demanded was respect and recognition of Russia’s national interests.

At the end of last year, our country put forward concrete proposals to rectify the unfair world order. Our ideas were summarized in two draft treaties with the United States and NATO. In essence, we proposed a peaceful initiative offering our vision of security architecture.

Those drafts were made public. They covered such matters as non-enlargement of NATO, non-deployment of weapons systems posing a threat to the Russian Federation near our borders, a moratorium on INF fielding, as well as specific initiatives to increase the predictability and reduce dangerous military activities. However, our key proposals were rejected.

Politicians who try to reduce the whole issue to the crisis in Ukraine are ignoring its origins and driving the discussions to a dead end. They look at the situation superficially, disregarding the root cause of the events. According to this logic, Russia, along with the United States and the UK, can be blamed for the occupation in 1945 of Nazi Germany that did so much evil and inflicted so many sufferings on the entire world. The Soviet Union alone lost 27 million people in that war.

Today it is extremely important to achieve the demilitarization and denazification of Ukraine, to consolidate Kiev’s nuclear-free status and its commitment to international agreements on the non-proliferation of weapons of mass destruction. We must do everything to prevent the undermining of the NPT.

There should be no threats to the Russian Federation coming from the Ukrainian territory. This is the objective of our special military operation.

It is extremely important that Western countries stop adding fuel to the fire by pumping Kiev’s regime with weapons. Moreover, there is an obvious need for the United States and their allies to urge Ukraine to respect international humanitarian law. We will never tolerate the shootings of civilians as well as the killings and torturing of captured Russian soldiers.

I would like to stress the need to immediately put an end to the spreading of fake news that discredits the great mission of the Russian military. A blatant example is the slander against us regarding the situation in Bucha. Staged scenes that distort the truth must be unacceptable.

Our country advocates for urgent actions on the international arena. The principle of equal and indivisible security must be restored. It means that no state has a right to strengthen its security at the expense of the security of others. With political will, this can be easily achieved through the development of serious long-term legal guarantees.

We insist on the need to strengthen international law and reinforce the role of the United Nations and its key body, the Security Council.

The Russian proposals do not infringe on the security of the NATO countries. On the contrary, they create conditions for de-escalation in Europe, restoration of trust and intensification of interaction in order to address global challenges, such as the fight against the COVID-19 pandemic, nonproliferation of weapons of mass destruction and means of their delivery, rebuilding of national economies, and settlement of serious climate change issues.

To conclude, I would like to recall the ideas of an American statesman, former Secretary of State Henry Kissinger. In his book Diplomacy he predicted the failure of the so-called Wilsonian foreign policy model of “spreading democracy”. Let me quote: “However powerful America is, no country has the capacity to impose all its preferences on the rest of mankind. […] America will have to learn to operate in a balance-of-power system […]”.

Kissinger also said: “Russo-American relations desperately need a serious dialogue on foreign policy issues… based on mutual respect of each other’s national interests”. Dear friends, let me assure you that our country is always open to interaction of this kind.

Thank you for your attention!