The Need To Redesign the World

This is an edited transcript of the remarks of Sam Pitroda to the Plenary Session of the Schiller Institute’s April 9, 2022 conference, “Establish a New Security and Development Architecture for All Nations.” Mr. Pitroda is a former cabinet minister and advisor to Rajiv Gandhi and several other prime ministers of India. 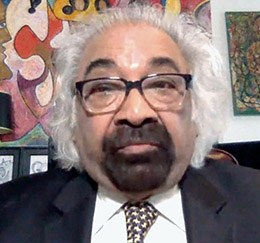 Ladies and gentlemen, greetings from Chicago!

War in Ukraine, like any other war, is of grave concern to humanity. It is of concern to all of us, because it makes our fellow human beings miserable due to deaths, destructions, displacement, poverty, hunger, hate, false propaganda. There is no reason for a war in 2022. Nothing can justify all the destruction that is going on. I am not here to take sides. I am here basically to talk about a need to redesign the world.

Today’s security order is based on command and control, as opposed to collaboration, cooperation, co-creation, and communication. Today’s world order is also based on total commitment to power and profits, as opposed to what is good for the planet, and what is good for people. I wrote a book called Redesign the World mainly because I believe that in the hyper-connected world of today and tomorrow, when all 8 billion people are essentially connected, we need a new paradigm.

What does it mean to have a connected world? How do we use this connectivity to take human civilization to the next level? The world was last designed after World War II, which gave birth to the UN, the World Bank, the IMF, NATO, the WTO, WHO, and many organizations. It also gave birth to GDP, GNP, per capita income, balance of payments, and various measurements. This design did pretty well in growth, prosperity, rebuilding Europe, rebuilding Japan. But at the same time, this design has not solved the problems related to poverty, hunger, violence, war. This design was based on democracy, human rights, capitalism, consumption, and military. Right after the design, the world got decolonized. No one ever thought that the world would be decolonized in such a short period of time.

Then, no one thought China would be able to rise the way China has been able to rise. The Soviet Union fell apart without a drop of blood, and then for a while, the world became unipolar. In the process, technology became pervasive, inequality increased, and then 9/11 changed everything.

Finally, COVID-19 reminds us that we are all interconnected, interwoven, interdependent, inter-related. What matters at the end of the day, is totally two things—the planet, and people. We have really created huge blunders with our environment, global warming, and we have not taken care of our people.

What we really need now is a whole new paradigm. We need to take our democracies, or whatever form of governments we have, to inclusion. We need to provide dignity to people, respect to all other human beings, and we can’t go on attacking people where innocent people get killed, mainly because there is a power struggle at the top. We need to really focus on human needs; human rights are not good enough.

We live in an environment where we can produce anything. Unfortunately, we still think of economy of scarcity when we have an economy of surplus. What are we fighting about? There is enough for everybody and some more, because technology has offered us a unique opportunity in production, management, distribution, delivery, markets, trade. But we have to think differently. Many times I say that we have a 19th century mindset, 20th century processes, and 21st century needs.

Capitalism hasn’t delivered fruits to everybody. It has increased inequality, where very few people have lots of wealth, and lots of people don’t have anything. We need a new economy, decentralization, bottom-up development, networking of companies. And we need to focus on localization while we still promote globalization. There is a lot of wisdom in local talent, local resources, local soil; and we need to take advantage of that. We can’t go to globalization just because we can optimize profits. GDP may not be the right way to look at economy; we need gross environmental product, gross human development products, and the whole idea of consumption has gone too far. We wind up producing what people can afford to buy, and not for people who need it. We need focus on sustainability, we need focus on conservation.

And finally, I come from Mahatma Gandhi’s roots. I believe firmly in non-violence. In this world, there is no room for violence, and violence begins at home, on the streets, in the cities. And our response to violence is to provide more hardware, more military equipment. Today, we produce $2 trillion worth of military hardware; we spend $2 trillion, when we know $200 billion can eliminate hunger in the world. I think it is about time to begin to focus on non-violence everywhere. But what do we do with this idea? The idea is to take democracy to inclusion, human rights to human needs, capitalism to new economy, consumption to conservation and sustainability, and military to non-violence.

In the last 75 years, we have not created one new major global institution like the UN, World Bank, IMF. I think it is about time to think of the redesign of the world. And that redesign must have people and planet at the center of the design. We need to constantly ask if it is good for planet, then we should do it. If it is good for human beings, we should do it. Unfortunately today, our design, as I said earlier, is focussed on power and profits. Until that mindset changes from command and control to coordination, cooperation, networking, co-creation, we will not create a new paradigm for mankind.

I firmly believe that hyper-connectivity, which democratizes information, decentralizes decision making, demonetizes services with content, context, duration, communication, is a unique opportunity for mankind with innovations, creativity, to take humanity to the next level. I believe in the redesign. I’m not here to really emphasize anything else, but I’m convinced that we all need to join hands to create a new world order.