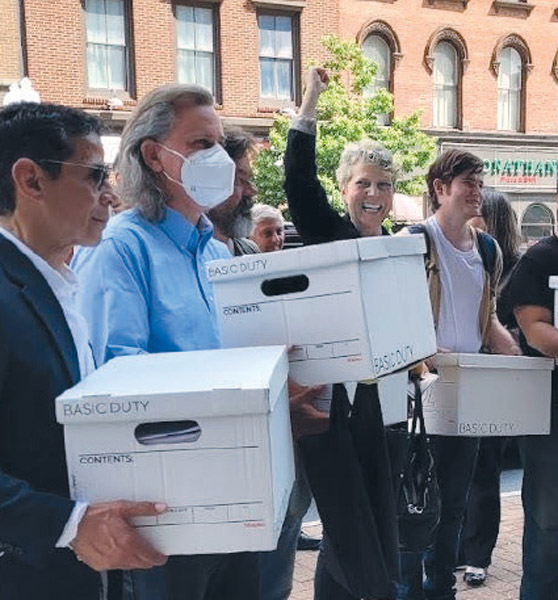 Sare for Senate
Triumphant LaRouche independent Diane Sare and her campaign volunteers delivering boxloads of petitions to secure her candidacy for U.S. Senator from New York in the Nov. 8 election, Albany, New York, May 31, 2022.

June 1—LaRouche independent candidate Diane Sare and her supporters joined together yesterday in Albany, New York, to file many more than the 45,000 petition signatures from the entire state, required to place her name on the ballot as a candidate for the U.S. Senate representing New York in the Nov. 8 election.

Sare is running to unseat the current U.S. Senate Majority Leader, “Killer” Chuck Schumer, who is leading the Congress to push the United States toward an existential, catastrophic war with Russia, while millions of Americans are confronted with deadly hyperinflation.

Addressing her supporters in Albany at the filing deadline—who had come from all over the state and from cities across the country, including Chicago, Los Angeles, and Houston—Sare told stories of what she learned while petitioning. She saw people having to return items to the grocery stores, because they were unable to afford to put gas in their cars to get back home. She met shoppers on the brink of tears after having to pay more than $150 for just two bags of groceries. 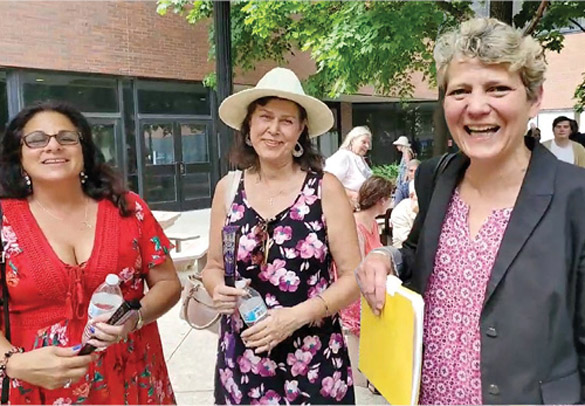 Sare for Senate
After having done the “impossible,” Sare enjoys a happy moment with supporters after submitting far more than the required 45,000 signatures. Below: Sare and her supporters crowd into the Board of Elections office for the filing.
View full size 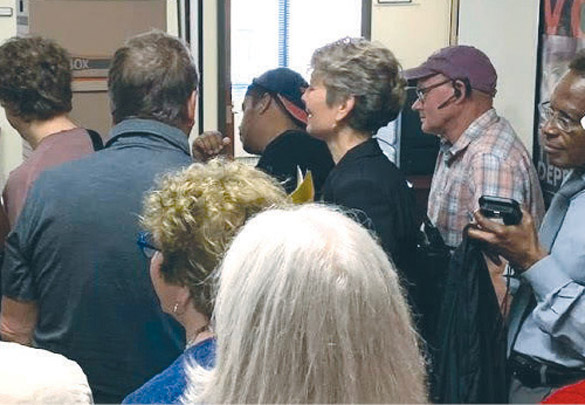 Sare said that inflation is pushing life necessities out of reach and driving businesses into bankruptcy, yet Schumer and his allies have no problem funneling over $40 billion worth of aid and weapons to arm Nazi elements in Ukraine. Their policy is to fight Russia down to the last Ukrainian if necessary, she said, rather than to achieve a meaningful peace for the people of Ukraine. Schumer and those who direct him simply cannot tolerate the independence of Russia or China in international affairs, and are willing to play a game of nuclear chicken rather than allow a new paradigm to take hold.

Restoring the ‘Republic, If You Can Keep It’

The political support that Sare has organized for her campaign allowed her to mobilize the tens of thousands of hours of volunteer work to amass the signatures now required to mount a challenge to the established parties. During the COVID-19 pandemic, as regulations for voting were generally being loosened in many states, the legislature of New York instead tripled the already very high number of signatures required to run as an independent for U.S. Senate, from 15,000 to an enormous 45,000. It removed the ballot status already won by the Libertarian and Green parties in the state. The overt purpose was to make statewide candidacies independent of the Democratic and Republican parties, politically impossible. Sare’s independent campaign, uniquely, did the impossible.

Thus, Sare’s campaign has represented the principles of ballot access and of democracy itself. Many of the exuberant campaign volunteers gathered on May 31 already felt that their lives had been changed by their work with Sare’s campaign. In a videotaped discussion with about 50 volunteers who attended the filing at the Board of Elections in Albany, some expressed a sense of personal accomplishment through their contributions to the campaign’s efforts. 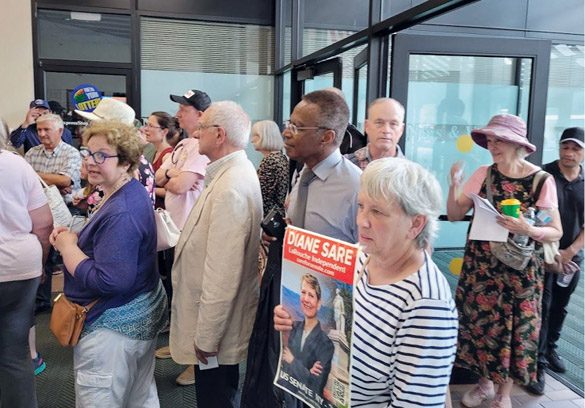 Sare for Senate
Some of the fifty exuberant volunteers who attended Sare’s petition filing at the Board of Elections.

The petitioning period is over as of this writing, and a process of potential challenges and responses will ensue over the next week and a half. But the candidate emphasized June 1 that this is not a time to wait and see what happens.

Sare told her supporters on a video call that day that this is the time to continue to escalate and expand her campaign, which has national implications. She urged that the completion of the petitioning process means that campaign activists can spend more time on the in-depth work of recruiting others to Sare’s platform as a LaRouche Independent.

Lyndon LaRouche’s outlook, as expressed today through the coordination and work of Helga Zepp-LaRouche, will take form in a Schiller Institute conference of June 18-19, dedicated to addressing the urgent need to implement LaRouche’s policy solutions to the current global crisis, and to bring about a new paradigm for peace, prosperity, and happiness for every nation, based on the construction of a new, international security and development architecture.