This transcript appears in the June 24, 2022 issue of Executive Intelligence Review.

Diplomacy and Cooperation in a Time of Crisis

This is the edited transcript of the presentation of Clifford Kiracofe to Panel 1, “A Decoupling of the Two Systems or a New Paradigm for Humanity?” of the Schiller Institute’s June 18-19 Conference, “There Can Be No Peace Without the Bankruptcy Reorganization of the Dying Trans-Atlantic Financial System.” Dr. Kiracofe is a former senior staff member of the U.S. Senate Committee on Foreign Relations. He is currently the President of the Washington Institute for Peace and Development. 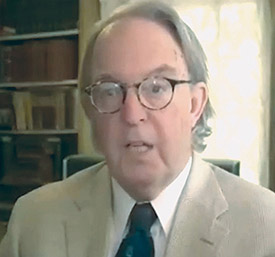 I would like to thank the Schiller Institute for inviting me to this much needed conference series.

My comment today will be brief. My message is a simple one: To manage today’s world crisis, we must encourage constructive diplomacy and international cooperation.

Today’s international situation is fraught with dangers to include the risk of nuclear war and the risk of global economic chaos.

The world today is moving toward multipolarity, what some observers call polycentrism or others call pluralism. Despite this international trend, the United States and the West are in a misguided crusade to return to a Cold War bloc system and to Cold War zero-sum thinking.

The bloc system Washington and its European NATO vassals aim for is one ranging so-called “democracies” on one side versus so-called “authoritarian states” on the other side. This formulation of the old Cold War bloc politics was the elite U.S. foreign policy consensus agreed on in 2005, so it is not new in Washington. We’ve seen it manifest itself in the Obama Administration, we’ve seen it in the Trump Administration, and we see it in the present Biden Administration.

This political bloc system has its economic counter-part [in] that we see developing today a bifurcated global economic situation. Some discuss the issue in terms of “de-dollarization,” or “a dollar zone vs. a non-dollar zone,” or a “de-dollarized zone.”

This bifurcated economic situation is exacerbated by the global economic crisis caused by several factors. The process of formation of economic blocs is today accompanied by disintegrating global economic conditions.

How did we get here and what are the features?

Against this background, the absolute failure of European and U.S. diplomacy to avoid war in Ukraine resulted in the present situation there. The UN Security Council in its Resolution 2202 of 2015 endorsed the Minsk 2 process. But it never got off the ground, owing to Western neglect and the intransigence of the Kiev regime, which the West itself imposed on Ukraine via the Maidan coup in 2014.

The Ukraine crisis further disrupts the global economy and, despite this, Western economic sanctions are piled up, non-stop, across the globe. Billions of dollars of U.S. and European taxpayers’ money are thrown down the Ukraine neo-Nazi sewer.

The new round of Western sanctions, as all the other sanctions against Russia—not to mention against China—have a blowback effect on the Western economies and the global economy, and are thus counterproductive, not self-evident. Just look at the numbers. These sanctions drag down and destabilize the world economy.

Now we see rampant inflation coupled with a global disruption of supply chains, energy, and food. Lurking around the corner is a collapse of financial markets when this modern South Sea Bubble finally explodes. Far from sleep-walking into the abyss, we are marching straight into it in a mental state of denial, perhaps more appropriately deemed psychosis.

Jamie Dimon of JPMorgan Chase just recently said that the world is heading into a “hurricane,” the dimensions of which he could not predict. That’s from a top international banker.

So, what about the global financial aspects of the present crisis?

Well, we all know that the central banks, particularly the U.S. Fed and the European ECB, have been grossly irresponsible in monetary policy, with endless printing of money and dysfunctional interest rates. The helicopter money, coupled with dysfunctional interest rates—bizarrely going negative, by the way, in many cases—causes unprecedented inflation as well as wild speculation in the financial markets.

This situation has been in place since the Bretton Woods agreements in 1944. But 1944 is a long time ago and the global financial architecture has become dangerously unstable today. Of course, financial stability is a key to a properly functioning international economy. The alternative, of course, is instability leading to chaos. Some experts believe we are today facing such a situation. As I just mentioned, Jamie Dimon, himself, as a global financier.

It is not unreasonable for states in this situation that are concerned by the reckless and dangerous international economic behavior of the West, to consider protecting themselves. In recent years, this objective has taken the form of preparing for what is called “de-dollarization.” That is to say, preparing for a time when the U.S. dollar is not the single recognized reserve currency in what some call a U.S. Treasury Bill monetary standard, as I mentioned.

What is to be done?

A bifurcation of the international monetary system with two competing blocs butting heads is not an optimal long-term solution. No doubt this process which is occurring today will continue for a time. We have to be realistic.

But I think it is prudent that we think creatively now about a way forward. Today we are in a complex world crisis, but this phase of international life will pass. While in the dark days of this complex crisis, we must now think about the way forward and about creating a viable post-crisis situation.

U.S. President Franklin Roosevelt realized that the post-World War II era had to be shaped by preplanning and action, during the war itself—World War II. Thus, anticipating a dysfunctional global economic system in shambles as a result of the war, he moved to stave it off and to create conditions for post-war financial stability and for post-war cooperative diplomacy. Fortunately, the international community at that time was able to rally and to cooperate on the Bretton Woods arrangements, and other aspects of the international financial architecture that were to come.

Roosevelt’s vision for postwar diplomacy and international cooperation had two main features. First, was the revival of a spirit of internationalism. The United Nations organization was created. Second, as a practical matter, Roosevelt hoped for postwar cooperation among the major powers such as the U.S., Russia, and China.

Zero-sum Cold War bloc thinking must be rejected. There is only one world that we live in on this planet Earth. So, cooperative, comprehensive, and systematic thinking is necessary for us all in order to manage world affairs with good governance, so as to promote international peace and development.

Thank you for your attention.