This transcript appears in the June 24, 2022 issue of Executive Intelligence Review.

Ukraine Has Lost the War:
But Thermonuclear War Still Threatens

This is the edited transcript of the presentation of Col. Richard Black (ret.) to Panel 1, “A Decoupling of the Two Systems or a New Paradigm for Humanity?” of the Schiller Institute’s June 18-19 Conference, “There Can Be No Peace Without the Bankruptcy Reorganization of the Dying Trans-Atlantic Financial System.” Col. Black was head of the U.S. Army’s Criminal Law Division at the Pentagon and served in the Virginia legislature first as Representative and then as a State Senator. 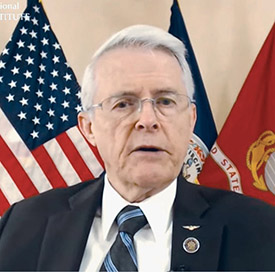 Thanks for letting me join you today.

I want to start by making clear that I’m not some left-wing pacifist. I served in uniform for 32 years, love my country, risked my life for it hundreds of times. I flew 269 combat missions as a Marine helicopter pilot. My aircraft was hit by ground fire on four flights. I volunteered for ground combat with the 1st Marine Division and made 70 bloody combat patrols. I was wounded and my radiomen were both killed fighting beside me as we tried to rescue a surrounded Marine outpost.

I was first served as a Marine Corps pilot, then later as an Army lawyer. I retired as chief of the Criminal Law Division at the Pentagon, testifying before Congress, preparing executive orders for the president, and advising the Senate Armed Services Committee on issues of national concern.

Later, I was a conservative voice in the Virginia House and Senate for a period spanning two decades.

Let me start right off by saying that I believe that Ukraine has lost the war. Of course, the war isn’t over, but it is lost. Let me show you why. It’s become an artillery duel. Russia fires 50,000 shells a day, ten times more than Ukraine. The Washington Post says Ukraine is almost completely out of ammunition and there are no replacements for its Soviet-era ordnance.

On June 10th, the Washington Post reported that Ukraine is suffering 1,000 casualties a day, including 200 killed. The rate of casualties has doubled in just 3 weeks. Let’s put that in perspective. Vietnam was America’s last truly bloody war. We lost 60,000 men in 10 years. That’s about 6,000 killed each year. With a much smaller population, Ukraine is losing 6,000 soldiers killed every month. This is a casualty rate 12 times higher than we suffered in Vietnam. You have to look at the populations of both nations. Before the war broke out, Ukraine had 43 million people. But with refugees it’s down to just 38 million today. The U.S. population, during Vietnam, numbered about 200 million. So, our population was roughly five times larger than Ukraine’s. So, on a per capita basis, this means that their casualty rate is roughly 60 times greater than the U.S. suffered during the very bloody war in Vietnam. Ukrainians have fought with courage. But no nation can sustain such casualty rates for long. Ukraine is finished.

On June 12th, NATO Secretary General Jens Stoltenberg all but admitted that Ukraine would soon be forced to sue for peace. He said,

Stoltenberg’s remarks suggest that NATO recognizes the war is lost. It’s now become an unpleasant distraction that simply needs to be wrapped up as far as NATO is concerned. The sanctions war has failed. The entire financial might of the Western World was unleashed against Russia. The Biden administration swore that the Russian ruble would be crushed into dust. They boasted of destroying the Russian economy and inspiring a revolution. They would create such hardships that Russians would revolt and overthrow their President. But today, the ruble is stronger than before the war. This year, it has been the strongest of all currencies. Russian inflation peaked around 15% and is expected to subside. But as their inflation tops out, Europe’s and America’s has just begun skyrocketing dangerously. The price of bitcoin dropped 5,000 points just overnight. The stock market is becoming extremely erratic and rocky.

Biden’s attempt to strangle Russian trade has failed. Far from blocking their trade with other nations, The Economist reports that Russia is generating a record trade surplus, with a billion dollars a day flowing in from oil and gas. Russia’s $250 billion trade surplus more than doubled its surplus in the year before the war. Despite sanctions, Russia has forged stronger ties with China, India, South Africa, Iran, Brazil, Saudi Arabia; all of which continue trading at enhanced levels with Russia. Important countries in the Global South are refusing to obey Washington’s order to impose sanctions. Independent countries fear the U.S., but they resent being told who they may or may not trade with. Dictating sanctions policy to sovereign nations is diminishing the world’s respect for America.

From the onset of war, Russians have never experienced shortages of food, housing, heating fuel, or gasoline. Anyone who expects Russians to crack from the loss of Gucci purses or Big Mac hamburgers do not understand the Russian psyche. Hopes of ousting President Putin have died. On March 1st, British Prime Minister Boris Jonson predicted that sanctions would “bring down the Putin regime.” Since then, Boris Johnson has nearly been ousted himself in a parliamentary vote of no confidence. At the same time, President Putin’s popularity rose to 83%, which is greater than any of his Western counterparts.

Meanwhile, the propaganda war is unraveling. At the outset of war, the United States unleashed a carefully orchestrated barrage of anti-Russian propaganda; all dissenting voices were blocked from the media. Western media breathlessly reported the dramatic exploits of someone called the “Ghost of Kyiv,” a pilot so skillful that he shot down an incredible 40 Russian jets, before heroically dying in battle. But the Ghost of Kyiv was a complete hoax. He was a media concoction, a fiction, a fraud who never existed at all.

There was another important false report about Ukrainian border guards, trapped by the Russian Navy on Snake Island. Ukraine reported that they refused to surrender, cursed their tormentors, and fought to the death. Zelenskyy even announced they would each receive the nation’s highest honor, the Hero of Ukraine. But this too was a fraud and a hoax. Those guards facing a Russian warship, actually did the sensible thing and surrendered without a fight. They were taken unharmed aboard a Russian vessel and returned to Ukraine as part of a prisoner swap.

Ukraine’s use of concocted stories like these puts in question not only those reports, but others claiming war crimes or battlefield victories. Yet until recently, the U.S. and NATO unquestioningly cited inaccurate Ukrainian assessments of the war. Recently, however, news outlets have begun acknowledging the possibility of a Ukrainian defeat. On June 10th, Newsweek reported that even the deputy head of Ukrainian military intelligence has admitted that Ukraine was at risk of losing the war to Russia. The first cracks are forming, and soon the world must come to grips with reality: The war is lost.

Americans are losing interest in the war. On June 13th, the British outlet, the Express, reported a poll showing that Americans think that the shortage of baby formula is five times more important than the war in Ukraine. Only 5% of the population see Ukraine as a top priority compared with 36% who worry about inflation, the economy, and jobs. Five percent now believe that sanctions have hurt the U.S. more than Russia. Americans are fickle, and they have moved on.

Europe Is the Loser

Europe’s the big loser in this war. U.S. sanctions blocked Europe from using reliable, low-cost Russian gas and oil. We forced them to import costly liquified natural gas from America. U.S. sanctions have battered Europe, which relies heavily on imported Russian commodities and fuel. America’s infatuation with alternative energy has over years compelled Europeans to rely on undependable solar and wind power. Restricting access to Russian oil and gas makes the coming winter a time of great peril for Europe.

One key U.S. military objective had always been to block Germany from opening its vital Nord Stream 2 natural gas pipeline. That pipeline was built by several countries over a span of 11 years. It was intended to double gas flow to Germany and the rest of Europe and to guarantee their energy security. But after spending a fortune on the pipeline, the U.S. has rendered the massive project useless, in order to shift the market to American liquid natural gas. Actions like these show that Europe no longer enjoys full sovereignty; it is now subordinate to the whims of London and Washington.

Before the war, Europe operated with moderate defense budgets. Russia was no threat and China was an important trading partner. Secure with its neighbors, Germany chose to maintain just 200 operational tanks. But war hysteria has forced Germany and other NATO countries into an unnecessary arms race that will impose enormous increases on European defense costs for many years. Ironically, the march to war has effectively subordinated the European Union to NATO, thus restoring Great Britain to its position of dominance over continental Europe, despite Brexit.

Now nuclear war still looms. Voices continue speaking of nuclear war today. Heather Conley, head of the influential German Marshall Fund, does not rule out a further escalation, saying that the West must not be intimidated by Russia. Conley said, “We must prepare for the use of tactical nuclear weapons.” A European official separately suggested arming Ukraine itself with nuclear weapons, which is an extraordinarily reckless action likely to trigger an unconventional Russian response.

It’s time for Ukraine to negotiate for peace and end the useless slaughter. Perhaps it could propose a framework reminiscent of the highly successful Austrian State Treaty of 1955, which saw the Soviet Union and allied powers withdraw their forces from Austria in exchange for Austria amending its constitution to make it forever a neutral, non-aligned nation and forbidding foreign troops from ever setting foot in Austria again. Ukraine could adopt similar provisions.

NATO should consider a separate treaty designed to make Ukraine a permanent nuclear buffer zone between East and West. By agreeing that Ukraine would never be admitted to NATO, it could permanently reduce regional tensions and significantly reduce the risk that either side might accidentally trigger a deadly nuclear incident. By acting before its defensive lines collapse, Ukraine could demand control over coastal areas surrounding the port at Odessa; it could insist on controlling all of Kyiv on both sides of the Dnieper River; and it might insist that Russia withdraw any troops west of that river. Obviously, control of many other areas must also be negotiated, but this might be a starting framework for peace.

That concludes my remarks today. I’m very grateful to the Schiller Institute for its effective efforts at promoting peace and for preempting the insane drive toward nuclear war. Thank you.