This article appears in the September 9, 2022 issue of Executive Intelligence Review.

Sept. 4—This is the fifth installment of EIR’s roundup of responses from around the world to the posting by the U.S.-funded and State Department sponsored Ukrainian Center for Countering Disinformation (CCD) of a Black List—essentially a “hit list”—of 72 prominent individuals from many nations, accusing them of being Russian propaganda agents, “information terrorists,” and “war criminals,” due to their failure to submit to the U.S./UK/NATO “narrative” about the military operations in Ukraine. The first 30 people listed were members and friends of the Schiller Institute who had spoken at a Schiller Institute conference during this year. You can find Part 1 of this series here, Part 2 here, Part 3 here, and Part 4 here. 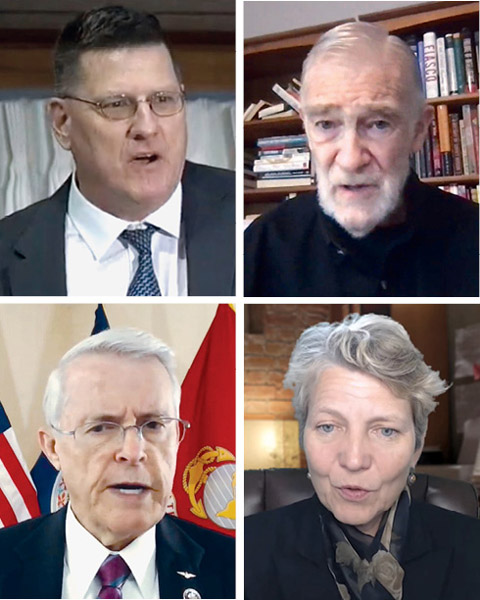 Clockwise from top left: C-SPAN, The LaRouche Organization, Schiller Institute, Schiller Institute
Four of the over 70 individuals whose names appear on the blacklist of the U.S.-funded and State Department sponsored Ukrainian Center for Countering Disinformation will be speaking to the media on Sept. 7 to demand it be shut down. Clockwise from top left: Scott Ritter, Ray McGovern, Col. Richard H. Black (ret.), and Diane Sare.

Although the groundswell of opposition to the U.S./UK/NATO-created CCD, including the critical role of EIR and the Schiller Institute in that effort, forced it to take down its now notorious “Hit List,” the institution still exists, and has in fact re-enforced its nefarious intentions. On Sept. 1 and 2, representatives of NATO, the U.S. State Department, and other European nations gathered again in Kiev under the auspices of Ukraine’s National Security and Defense Council (NSDC) and its now-notorious CCD to accelerate their plans to impose dictatorial thought-control over the globe, in the name of fighting “Russian disinformation.” This is precisely the operation EIR has demanded be shut down in its just-released dossier, titled “Kiev’s ‘Info Terrorist’ List: ‘Global NATO’ Orders a Hit on Advocates of Peace.”

The occasion was an international roundtable, “Combating Disinformation in the Conditions of Military Operations.” The CCD reports ambassadors and representatives of 24 countries took part, naming 18 of those participants. Among the names released were those of two “senior experts” from NATO’s Strategic Communications Center, and diplomats and “experts” from the U.S., France, Germany, Sweden, Poland, and Canada, as well as the Baltic nations.

Oleksiy Danilov, Secretary of Ukraine’s National Security Council, and CCD acting head Andriy Shapovalov hosted the meeting. Shapovalov set the terms for discussion: “Today, our goal is to form an international hub for countering information threats at the national and international level,” he announced. He insisted that international law must recognize “infoterrorism” as a crime, and anyone practicing such a crime be declared an “information terrorist” and be subjected to measures such as are applied to actual terrorists. “Only in this way will we be able to effectively protect Ukrainians and citizens of partner states from information crimes, in particular, information terrorism,” Shapovalov declared, according to the summary reports published by the CCD and the NSDC.

Danilov called the “information front” as important in winning war as fighting on the battlefield. He stated outright that the CCD had been created in preparation for the war they were planning:

We understood in advance that there would be a war; that’s why in March 2021, the Center for Countering Disinformation was created by Presidential Decree.

A few days earlier, Danilov had reported that Ukraine—and thus its NATO backers—began preparing for war in Dec. 2019.

The CCD asserted that everyone present agreed, reporting in its release that “the parties emphasized that information terrorism is actually as real as ordinary terrorism and has no less consequences.”

The NSDC reported briefly on what only a few of the foreign speakers had said, but that did include remarks by U.S. Embassy Public Relations officer Robert Post, who appeared gung-ho on the project. “The G7 countries, in particular, the USA, together with the Ukrainian authorities, are actively fighting against Russian propaganda and disinformation,” he stressed.

Canadian Embassy First Secretary Molly Graham described Canada’s efforts to control the press, by “‘focusing a lot of effort’ on conducting training for journalists on countering disinformation,” because “democratic” countries understand that “propaganda and disinformation” threaten “freedom of thought.” That is, “One is free to think what he or she wishes, unless it doesn’t agree with our ‘narrative,’ in which case we may kill you.”

The head of operations of the Swedish Psychological Protection Agency (!), Mikael Tofvesson, was all in, waxing equally Orwellian in his enthusiasm over how “our struggle is aimed at building a free democratic society where there is no place for propaganda and misinformation, but only freedom of speech and pluralism of opinion.”

Various foreign speakers held up Ukraine as a model “to the whole world [of] an effective countermeasure against disinformation.”

More information on the roundtable meeting can be found here.

Former Marine intelligence officer and UN weapons inspector Scott Ritter; former senior CIA officer and co-founder of the Veteran Intelligence Professionals for Sanity (VIPS) Ray McGovern; former chief of the Army Criminal Law Division at the Pentagon and former member of the Virginia Senate Col. Richard Black (ret.); the current candidate for the U.S. Senate from the state of New York, Diane Sare; and other Americans targeted by Ukraine’s CCD are scheduled to speak to the media, demanding Congressional action to stop the U.S. funding of the CCD, and demanding that it be shut down by its “Global NATO” controllers.

The dossier, published in the Sept. 2 issue of EIR, states:

Rapid, decisive international action is required to force the closure of the Center for Countering Disinformation (CCD), which operates under and answers to Ukraine’s National Security and Defense Council. A blacklist issued by the CCD on July 14, 2022, naming more than 70 leading journalists, academics, politicians, military, and other professionals from 22 countries, as “Kremlin propagandists,” is a hitlist, posing a grave threat to the personal security of those named therein.

That EIR dossier further states that it has now confirmed that at least five of those fingered by the CCD are included in the list of “criminals to be eliminated” published by the avowedly fascist “Myrotvorets” gang in Ukraine: Schiller Institute founder and leader Helga Zepp-LaRouche, Schiller Institute spokesman Harley Schlanger, Ray McGovern, and Scott Ritter, who are participating in the Media Availability; and former U.S. Congresswoman and Democratic presidential pre-candidate Tulsi Gabbard. The Myrotvorets list is reported to have accumulated nearly 200,000 names since it was started in 2014 and, given the difficulties in using its search engine, others from the CCD blacklist may also be on the Myrotvorets hitlist but have not yet been found by searching.

The dossier documents that the CCD functions as Global NATO’s “Ministry of Truth,” and that it is “funded and closely advised by the U.S. State Department, British intelligence, and NATO in every step it takes.” It asserts that the responsibility for the CCD/Myrotvorets hits, both those which have occurred and those threatened, will rest squarely on those international sponsors—including members of the U.S. Congress who vote in support of continued funding for the CCD operation.