America Alone in a Changing World? 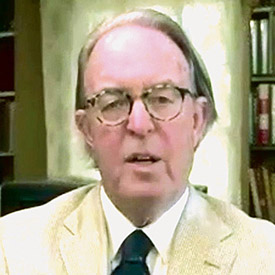 I would like to thank the Schiller Institute for inviting me to speak at this important conference. Over the years, from memorable lunches with Lyn at his home in Virginia to conferences in Berlin with Helga, the intellectual atmosphere has been stimulating amidst kind and thoughtful hospitality.

Today, my topic is “America Alone in a Changing World?” There is a question mark in this title because it remains to be seen whether Washington will change its policies from confrontation to constructive engagement with the international community. By “international community” I mean the sovereign states represented in the United Nations General Assembly. The United Nations must be strengthened and its commitments put at the core of the international system.

The international system today is rapidly changing from a U.S.-dominated unipolar system to a pluralist multipolar system. We see the rise of China, the return of Russia, the emergence of countries such as Iran, Indonesia, Mexico, Egypt, and Brazil, and the increasing influence of various formats and organizations such as BRICS [Brazil, Russia, India, China, South Africa], ASEAN [Association of Southeast Asian Nations], SCO [Shanghai Cooperation Organization], and the EAEU [Eurasian Economic Union]. Then we have the new situation in Europe with the Ukraine war and its economic and diplomatic impact not only on Europe, but on the world as a whole.

I would also add that the China-Russia relationship is a key factor and the February 4 joint statement this year by Presidents Xi and Putin marks a new stage in the development of international relations.

An increasingly belligerent and irrational United States may well find itself isolated and alone as never before in a changing world that seeks peace and development.

The Taiwan and Ukraine issues are salient at this time.

The visit of House Speaker Nancy Pelosi to China’s island of Taiwan increased tensions. Pelosi’s escapade occurred in the context of Washington’s proxy war against Russia in Ukraine and its empty-handed “diplomacy” in the Pacific, Asia, and Africa.

Pacific island states, ASEAN, and African states politely have rebuffed U.S. efforts to enroll them in the crusade against China and Russia.

European leaders entangled in the NATO alliance follow Washington’s diktats. The economic and social fallout from Washington’s Ukraine war takes its toll on Europe, as we see every day. No doubt political instability will develop as European publics experience the effects of their leaders committing economic suicide by supporting the American proxy war in Ukraine and supporting U.S. sanctions against Russia and China.

The United States lost the Korean, Vietnam, Afghan, and Iraq wars. It now appears that it will lose its Ukraine proxy war. Did Washington become a rogue state since the World War II victory over German Naziism and Japanese militarism? Not a few scholars and observers would say so.

Does the U.S. promote world peace, cooperative diplomacy through the United Nations, and international law? It is hard to hide the fact that Washington does not, critics say.

The Pelosi whirlwind tour through Asia was intended to reinforce Washington’s anti-China policy. But no one was biting. Significantly, the South Korean leader chose to have dinner with friends rather than to see Pelosi. ASEAN members politely reminded Washington that they do not want to choose sides in an American zero-sum game in the Asia-Pacific region.

U.S. Secretary of State Tony Blinken similarly was rebuffed on his recent Africa tour aimed against Chinese presence in Africa—that’s what he was aiming at. It is no surprise that South Africa took a dim view of his effort. That country is a member of the BRICS group.

BRICS today is expanding its reach as a number of countries are knocking at its door seeking admission. There are good, practical reasons to become a member of this organization: because it supports economic development and cooperation between members in various fields, and it respects members’ sovereign right to choose the development model most suitable to their culture.

U.S. national strategy and foreign policy made three grave and irreversible mistakes over the past six decades: the Vietnam War, post-Cold War policy of hegemonism, and the Afghan-Iraq wars. U.S. leaders learned nothing from their mistakes and failures.

The old Cold War was terminated through diplomacy and an agreement between U.S. President Ronald Reagan and the late Soviet Union President, Mikhail Gorbachev. But U.S. ruling circles, during a multi-year bipartisan project, prepared the New Cold War during a series of high-level conferences in 2004, 2005—almost 20 years ago.

The purpose of the policy project was to restart the old Cold War and to reestablish a bi-polar bloc system, if not a unipolar system. The old two-bloc Cold War system, between the “Free World” and the “Communist World,” was converted, and a new phrase was established, that is the “democratic” world and the “authoritarian” world—again, a bipolar approach.

It is notable that this project, called the “Princeton Project,” was headed by George Shultz for the Republicans and Tony Lake for the Democrats. It included a number of high officials, think tank persons, academics, and so forth. It issued its final report to the public in 2005. The co-director of the project staff, Anne Marie Slaughter, went on to head the Policy Planning Staff of the U.S. State Department under President Barack Obama and Secretary of State Hillary Clinton

It is notable that this policy group included such participants as Japanese diplomats and scholars as well as Australian intelligence officials. Thus, the Quadrilateral Security Dialogue [“Quad”: U.S.-Japan-India-
Australia] anti-China alignment and the more recent Australia-UK-U.S. [AUKUS] anti-China alignment should come as no surprise. The Quad concept was embodied in the late Japanese Prime Minister Shinzo Abe’s “Diamond” strategy against China.

Because the policy project was bipartisan, it was logical that it would carry forward during the next administrations. Biden continues the elite U.S. foreign policy consensus. In fact, the Biden administration pushed the consensus policy to a level of belligerence sharper and more intense than under either Barack Obama or Donald Trump before him. The explanation is simple. Throughout his career in politics in the U.S. Senate, and as the Vice President under Obama, Joe Biden followed the Establishment’s foreign policy consensus.

So, Biden’s New Cold War policy should have come as no surprise. Some foreign capitals, academics, and observers may be surprised that Biden’s policy is not more moderate than Trump’s. But after a year and a half of the Biden administration foreign policy, perhaps they should reflect on any mistaken perceptions and analytical methods.

What’s Ahead for Washington?

Evidently, it is not reasonable to expect a change of heart in the U.S. Establishment and its foreign policy any time soon. Of course, the American people desire peace and development, but this is not the approach of the U.S. Establishment. So, the New Cold War will go on although it is a dead end for the United States and its European NATO allies. How long it takes to hit the dead end is an open question.

It is reasonable to expect that because of the inexorable shift toward a multipolar world, the United States will become more isolated, if it does not drop its belligerent and bellicose policy of hegemony. U.S. policy, with its continuing features of neo-imperialism and neo-colonialism, serves only to increase U.S. isolation over time. The international community rejects that type of behavior, increasingly, and a counter-weight to that policy is in the process of forming a new multi-polar international system.

Washington’s politicians must make an agonizing reappraisal of U.S. foreign policy and drop hegemonism and Cold War thinking. Otherwise, the American people in the future may find their country alone in a changing world.

Thank you for your attention.