How We Managed To Bring the World to the Edge 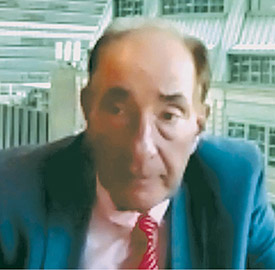 Good morning, ladies and gentlemen! It’s a pleasure for me and an honor for me to address the conference, “Inspiring Humanity To Survive the Greatest Crisis in World History,” which is very topical, unfortunately, because suddenly this year we encountered a political, economic, and existential crisis, which truly can be compared only to the most serious milestones in human history.

Of course, it’s not sudden or it’s not just a Black Swan, because this crisis has been in preparation for years—more than three decades, because when the Soviet Union collapsed—thanks to Mikhail Gorbachev, whose demise I just learned of—at this time, many people said it was the end of history, meaning that, now that the West had finally won over communism and over any alternatives, there will be no more conflict. However, that was not the case. Russia itself was very eager to join this new world order, this new West-led order as an equal partner, but Russia was denied this opportunity. Moreover, Russia’s vital interests were not taken into account.

I’m not sure what plans there are in the West, in relation to Russia, but judging by the attitude of the leaders of Russia, there could be quite a serious danger of trying to undermine the whole civilization. So, for Russia, the war in Ukraine is not just a Ukrainian war, it’s an existential war. Russia is fighting not to gain territories or population or some resources—it has enough territories and resources in its vast territory—but in order to fight the imminent danger of disintegration of the country and the destruction of the whole of Russian civilization.

So, this is the continuation of a century-old struggle with the West. These days, it is also a part of the global struggle for a new, more just international order. Because the order and the system of global governance that have been with us for the last three decades, are Western-led. It’s a unipolar world that they try to construct. And what the West is fighting for is not democracy, but its dominance.

Democracy is, of course, a good thing, but after all, it’s just a system of governance. It’s good when your neighbors are having this system of governance, but why should you waste your resources and even lives of your soldiers in order to install this system into a foreign country? That’s just a pretext. The real reason is dominance, dominance which translates into the economic dominance, and in fact robbing other nations and the whole world, for its own benefit.

The new international situation, when the rising powers want a share, both in their striving for a better life and in governing their own destiny, sooner or later should have come into contradiction over this reality. Hence, the war that has just started is part of a broader struggle, which unfortunately brings together vast parts of the world as a global confrontation of which we might just be seeing the beginning. Unfortunately, it may continue for decades to come. But this is better that it would continue for decades as a slow-burning conflict, rather than an all-out war, which is not impossible, unfortunately. Sometimes wars start accidentally, and they escalate accidentally, so unfortunately no one these days can exclude some accidental escalation of the war which may bring about a thermonuclear apocalypse.

God forbid that it would happen, but in the meantime, it is also important to have a positive agenda. “Positive agenda,” meaning, as I said, that the countries of the South and the countries of the non-Western part of the globe should struggle, not for dominance, but for a just order which would enable them to take part in the decision-making and implementing and getting the fruits of their efforts. One of the reasons it doesn’t happen is the unjust dollar-centered financial system in which the emission center just reaps its own benefits by being able to just print empty banknotes. This is why the call which is promoted by The LaRouche Organization for a New Bretton Woods system is, I think, very important and very relevant.

Another factor is the joining of forces by the biggest civilization platforms in the BRICS format. It now includes Brazil, Russia, India, China, and South Africa, and soon some other big countries like Argentina, and others—Indonesia, maybe Iran, may join us. This is a really big force which can shape the global economic order and financial flows in a way which is more just and more satisfying to the whole world, not just a small number of rentiers in the so-called “gold billion” countries.

I think this is exactly what Lyndon LaRouche, whose 100th anniversary we are celebrating, was striving for. And, I believe that this current conference is very topical for discussing of these issues and coming up with recommendations and ideas, which can be supported all over the world. So, I wish you all success. Thank you.