Lyndon LaRouche: ‘What It Is
To Fight for Truth and Justice’ 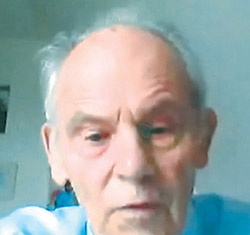 Thank you for the kind invitation to this conference. I am from Slovakia. [For] 27 years I worked in research of mathematics and informatics in the Institute of Technical Cybernetics of the Slovak Academy of Science.

Then, after the Velvet Revolution, I was in many various functions as a member of the Christian Democratic Party in the government and parliament, and also in diplomatic work in Rome. Allow me to proceed with my remarks concerning today’s crazy situation in Europe and also in Slovakia.

In 1989, communism miraculously collapsed. We had a chance to start living in truth. But nationalism, egoism and Western shock therapy appeared, which was no therapy, but shock for us. Many asked: “Why did you bring us out of Egypt?”

But the ship turned 180 degrees back in the direction of freedom and democracy. Now, for 33 years we are free. You can write, say, and print what you want. We can travel, do business and live as we wish. We are limited only by the crazy world of advertising, consumerism, fashion and celebrities. However, people’s thinking has changed very little. Old habits remain—irresponsibility, laziness and passivity.

People’s ability to distinguish between good and bad, important and unimportant, essential and non-essential, has weakened. The revolution freed us from the Communists, but it also contributed to great social differences, to the growth of unemployment, to the return of old structures, and the exclusion of former dissidents from politics.

The consequences of the global, financial, demographic and moral crisis are also the breakdown of families, abandoned children, the pressure of advertising, anti-consumer culture; and now rising prices of energy, speculation, growing Bitcoin and stock market operations, and striving for greater polarization.

The problem of capitalism, globalization, unemployment, dictatorship of financial markets, social issues, etc., cannot be solved in the margin of the values of Western civilization, because these values are the cause of these problems.

The only solution is a new lifestyle, solidarity, subsidiarity, and the recognition of the dignity of every human being. Today, morality disappears from the family, politics, economics and culture. The demographic crisis, migration and emigration, uprooting of people from other cultures, and changes in value-orientation push us down. Europe is dying under the motto “United in Diversity.” Yes, it is diverse, but not united. Her social system has produced too many unemployed. The public is manipulated by the aggression of communications and information industry in the media.

My Experience with Lyndon LaRouche

Now I mention some personal memories about Lyndon LaRouche. I met and discussed with him 17 times. In my 700-page book, Top Secret—When We Were Free, published in 1999, [there] is about 80 pages about him and the Schiller Institute.

We met in Slovakia two times, many times in America, and also two times in Rome, where I was ambassador of Slovakia for Italy.

I became familiar with his case in 1990 when, after the Velvet Revolution, I was the Vice Premier of the federal government of Czechoslovakia. It was a tragedy at the time of the fall of the Berlin Wall, Lyn was put, for nothing, in jail.

In my life, I had never met such an educated person, economist, mathematician, musician, and historian, who knew the answer to every question. He introduced Christian moral principles to politics and economics. I was always surprised about his knowledge about classical music, super computers, religion, and also politics.

He was a hard fighter, but also full of humor and tenderness, when speaking, for example, about love and God. He was always a generator of new ideas.

His Program was: the need to produce, not speculate; moral principles would be established in politics and the economy. He predicted many things which are happening just today. 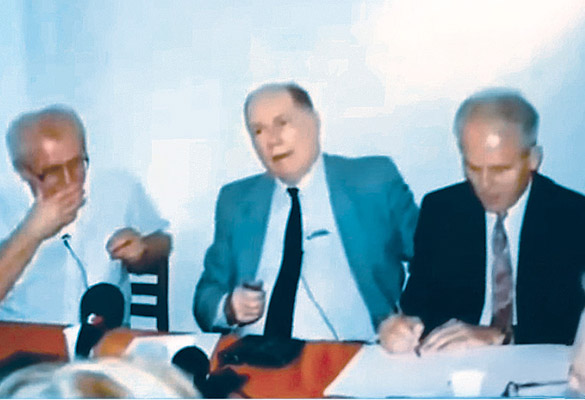 Courtesy, Jozef Mikloško
After his speech Professor Mikloško presented photographs of his many encounters and collaborations with Lyndon LaRouche: organizing for European reconstruction from the collapse of the Soviet Union; inspiring college and graduate students in Slovakia; presenting Classical concerts; and teaching young people. These two may be representative: Above, an economic conference in Bratislava in 1996, with Mikloško to LaRouche’s left; and below, meeting young children at the teaching institution of Professor Mikloško’s son.
View full size 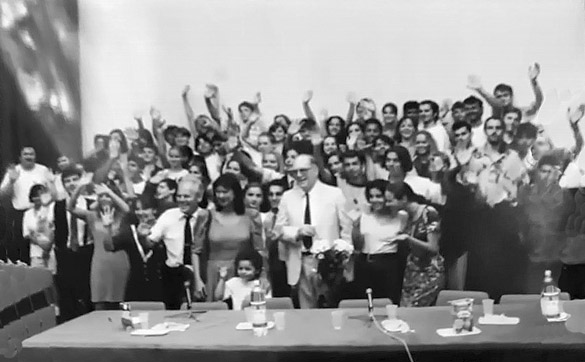 I visited the United States six times because of him. I lobbied in Congress, in the Senate, in universities, and conferences. His [prison] sentence for 15 years had so many irregularities that the international community, including myself, protested many times against it. I was proud that I too, contributed to his parole in 1994.

We met for the first time in August in 1993. Our friendship began at the prison in Rochester [New York], where I visited him. His sentence of 15 years was a death sentence. Lyn met me with a smile and optimism. We spoke for six hours.

In December 1993, I was proud that I was probably the first person on the Earth to know that Lyn would be free.

I was very glad that in August 1994, Slovakia was the second country that he visited following his release. He met with many people—120 young people from 17 countries whom we organized for a conference at Smolenice Castle, house of Slovak scientists. His second visit of Slovakia was in 1996, and was also very successful and interesting.

At a conference in the United States in 1996, I asked him a question about God. The answer, publicly for all, was beautiful: The new wine I bring clean, cannot be in old skins. We will start a new revolution based on Christian love. Toward neighbors like a Samaritan, were his last words.

When Lyn was 75, a gala concert was held in the United States with many personalities, musicians, politicians. I was the master of this ceremony. I publicly asked him this question: “What is the impact of media manipulation on people and what should be done about it?” A hard question. His answer is actual also today.

The situation in the media is terrible. Today’s anti-culture is killing the youth physically and mentally. Sex is a commodity, like Coca-Cola. It is necessary to change the basic axioms that many believe because man is different from animals. The philosophy of hedonism of the Baby Boomer generation is misguided. The result is Generation X, victims of this ideology. It is rather a degeneration than a generation, because it has given up all historical experience. It has no opinion of its own. Jesus Christ showed us what it is to fight for truth and justice, that success does not depend on our abilities. That even if we lose, we must not compromise with evil.

This was the answer of Lyndon LaRouche, for my really hard question.

Dear friends, thank you very much for your attention. And I must tell you that I will never forget meeting Lyndon LaRouche, my contact with him, and I am very glad to participate in this 100-year occasion of this big statesman. And thank you very much.