Marathon Video Tribute—LaRouche at 100: The Triumph of Truth 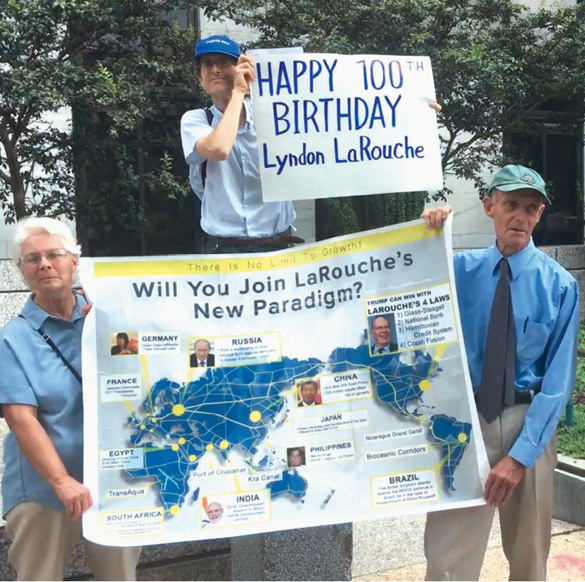 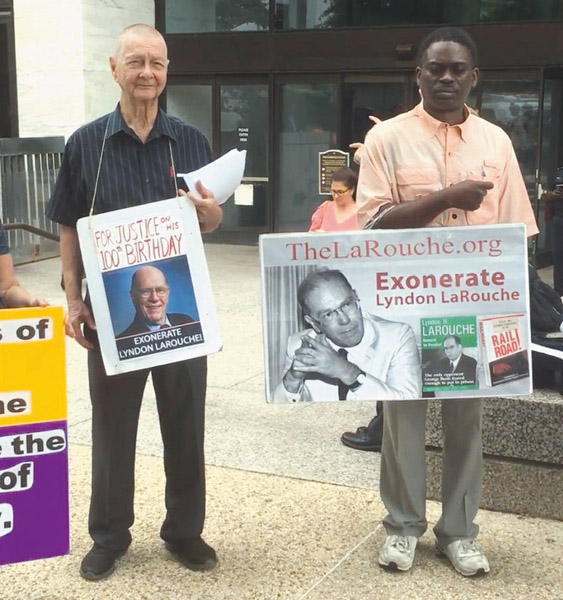 Sept.10—The international LaRouche movement commemorated the anniversary of the 100th birthday on Sept. 8 of Lyndon H. LaRouche, Jr. with an all-day online, video marathon. The 13-hour tribute featured a battery of recordings of LaRouche’s presentations at classes and events, as well as clips from rallies and other activities, on Sept. 8, honoring him from around the world, from Paris to Houston. Interspersed were pre-recorded individual testimonies of appreciation, including some from the past.

The overall messages of the day were, firstly, that LaRouche knew how to overcome the tension between NATO and the Soviets to join as allies in neutralizing nuclear weaponry and re-opening economic growth and technological advancement world-wide. Secondly, we are continuing the course that he and his wife Helga Zepp-LaRouche, were leading at the time of his death. And thirdly, we can win if the citizens of the Americas and Europe work in their best interests in coordination with China, India, Russia, and the developing nations of Asia, Africa, the Americas and everywhere.

The day began at 6:00 a.m. EDT with a three-hour re-broadcast of the June 8, 2019 memorial program titled the “The Triumph of Lyndon LaRouche,” an international event in New York City, following LaRouche’s death Feb. 12 in Germany. The memorial was introduced by his wife Helga, his closest collaborator, and successor to his leadership. It was also closed by Helga followed by a musical set, notably featuring Mozart’s Ave Verum Corpus, dedicated to the influence on all future time of the death of Christ. The program followed Helga’s initiative as being fully dedicated to her husband’s commitment to inspiring all of humanity, through direct and indirect contact with thousands and millions of people to instill in them an understanding of how only human creativity can build a better future for humanity. At this time, this means that only the rapid extension of direct creative action will make humanity’s future possible at all.

A striking feature of the program was that significantly more than one-half of the time was in Classical music from Bach through Brahms, including many spirituals. In her closing remarks, Helga, who lauded her husband as the most humane and loving person she had ever known, recounted how she had told Lyn that she answered his last words to her, “Ich liebe dich,” in kind. This exchange between the two can be taken as not only binding between them, but as a reminder of their mutual commitment to all of humanity. A commitment that they would welcome all of us to join. 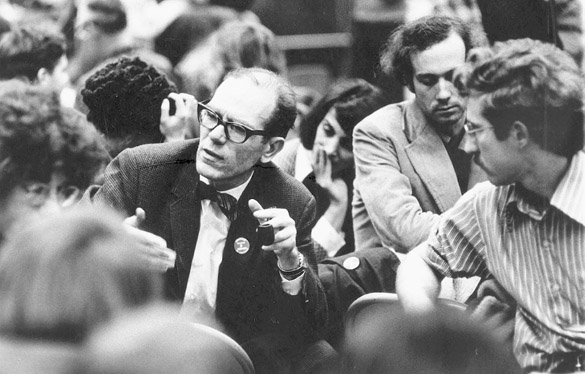 EIRNS
Lyndon LaRouche in 1973, in dialogue with students at a conference in New York City.
View full size 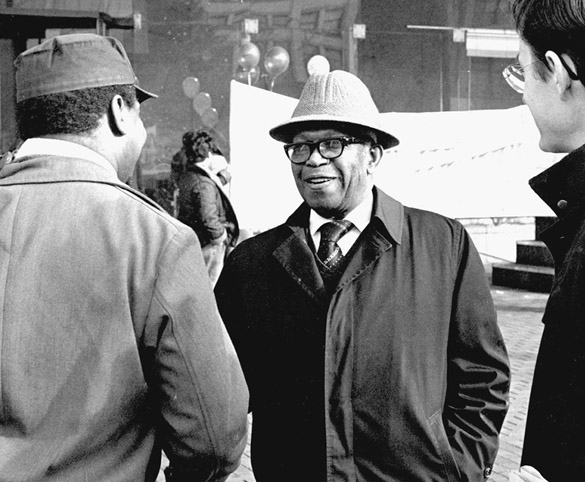 The memorial was followed by a five-part series, “The Power of Labor” produced and first released for viewing by LaRouche’s 1984 Presidential campaign organization, and intended to be used in conjunction with LaRouche’s textbook, So, You Wish to Learn All About Economics? He introduced his talk by listing the great geniuses of the Golden Renaissance and their followers. These were Nicholas of Cusa, Leonardo da Vinci, Gottfried Leibniz, and Carl Gauss. The first of these, by far the least well known of the five in the 21st Century, LaRouche called “the most profound mind of the last 600 years.” 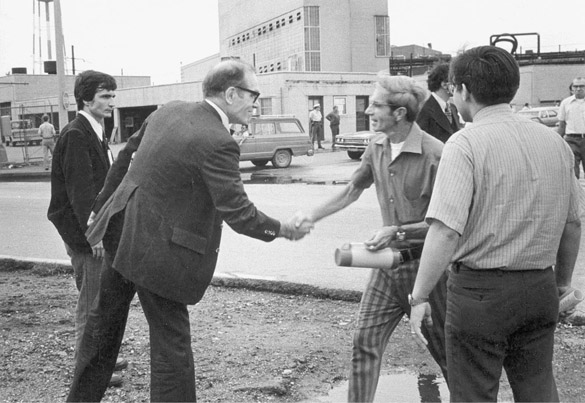 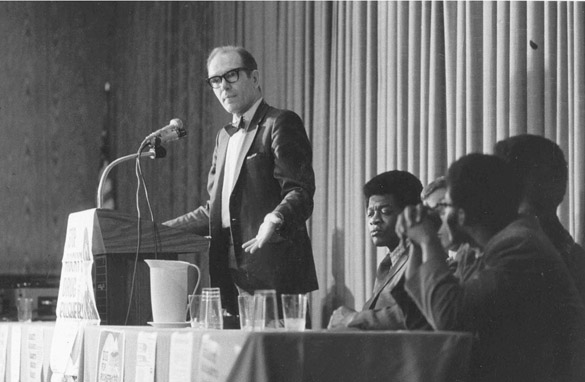 The core of LaRouche’s understanding of economics is that all reality is based on action. Identifying an object as a fact, as is common, is not scientific. Everything known to us in the universe is changing, and following specific patterns of change, of motion. The ancient founder of the language of science, Panini, communicated this by saying all language is based on transitive verbs, that is, verbs that are describing action. In line with LaRouche’s understanding, the five lessons on economics that are presented are based on the modern laws of physics, led by Nicholas of Cusa and the succession of scientists who followed his initiatives.

LaRouche traced back how to understand economics, by understanding causality in the way that it is communicated in Genesis 1:28. That is the verse reporting on God’s blessing and advice to Adam and Eve, which is applicable to all humanity: “Be fruitful and multiply, and replenish the earth, and subdue it; and have dominion over the fish of the sea, and over the fowl of the air, and over every living thing that creepeth upon the earth.” That is to say that there is a process of human life that involves taking responsibility for a connected process of development that continuously provides for future existence. 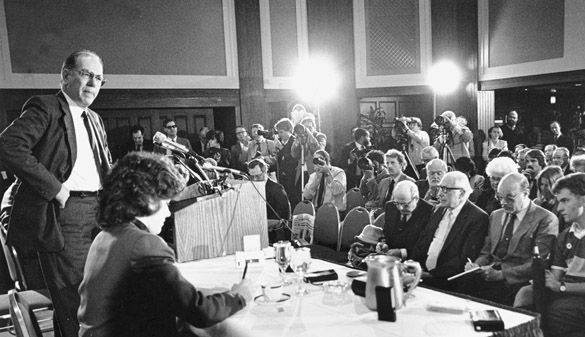 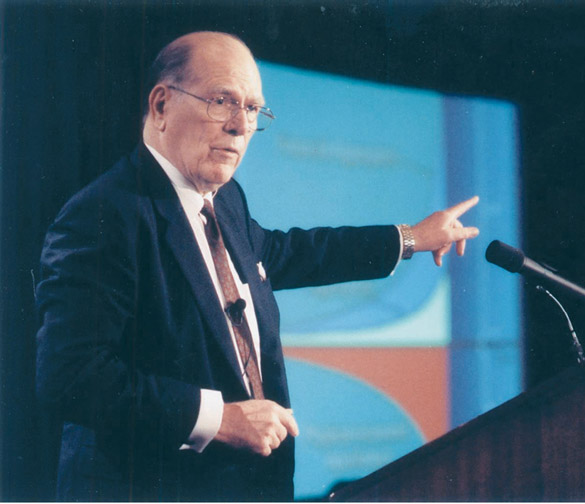 This was followed by a recording of LaRouche’s first lecture of four on the subject, “Beyond Psychoanalysis.” In this LaRouche pointed out that in the period after World War I, and actually dating back to the situation discussed by Percy Shelley in his “Defence of Poetry,” that society’s understanding of how actually organized structures must function, depends on poetic communication. That is to say that poetry is the medium through which a continuous process of advancement can be communicated to humanity. This works because, if poetry is poetry, it expresses the actual relationship between creative understanding and the reality of both social and physical action.

After the “Beyond Psychoanalysis” recording, the March 1999 video by LaRouche titled, Storm Over Asia was played. In it, LaRouche reviewed his intervention in financial and economic policy issues dating back to 1977 and continuing through 1999. His warnings about the impact of Nixon’s 1971 decision to scrap the Bretton Woods international financial agreements and eliminate gold reserve support for the U.S. dollar occurred just as he had warned they would.

The same is true for his warning to the Soviet Government about the demise of the Soviet Union, should it not resolve to join the U.S. in the Strategic Defense Initiative (SDI) that he had designed under the authority of President Ronald Reagan. After LaRouche’s main presentation, Lothar Komp of the LaRouche movement in Germany, and John Hoefle in the United States, elaborated how the global financial structure was accelerating the demise of the Russian financial system, technology growth, and economy. After LaRouche finished, the LaRouche movement’s Debra Freeman reported on how Congress, President Clinton, and his staff responded to LaRouche’s proposal and explained why the citizens she was addressing had to take responsibility for the future.

After a few short messages, a video of LaRouche speaking at the June 17, 1997 seminar about the dim fate of Africa was shown. He started by explaining that it is not only Africa’s problem because, “What’s affecting Africa is affecting you.”

Next, Rev. Richard C. Boone of Louisiana introduced Lyn as totally credible and totally reliable, at a Sept. 8, 1996, meeting in Monroe, Louisiana. Lyn spoke largely about strategy to take down politicians by using their own positions and actions against them in order to get now-pessimistic citizens behind his ideas. He described successes against a number of people and reported that his lead target was George H.W. Bush.

The last major section was Lyndon LaRouche’s and Helga Zepp-LaRouche’s testimony to the hearings before an independent panel charged with examining the case against him. This event occurred on August 31, 1995 in Tysons Corner, VA. The efforts of Lyn and especially Helga over the previous six years were of major importance in making Lyn’s release on parole in January 1994, and therefore this event, possible. The participants included legal experts, among them Lyn’s chief attorney Odin Anderson and former Attorney General Ramsey Clark who managed his appeals, many leaders of Dr. King’s movement, notably including Amelia Boynton Robinson, visitors including members of the LaRouche movement from Europe, and others.

The portions chosen for the Marathon included Lyn’s thoughts on the whole process aimed against him. Helga’s response when asked by the moderator to speak on the issue of whether and how to proceed toward Lyn’s full exoneration was that, as we have seen in the almost three decades since that event, Lyn’s exoneration was not merely essential for Lyn, but, as we know all too well today, a question of liberating the philosophical, political, scientific, spiritual, and other streams of ideas in the United States and globally. 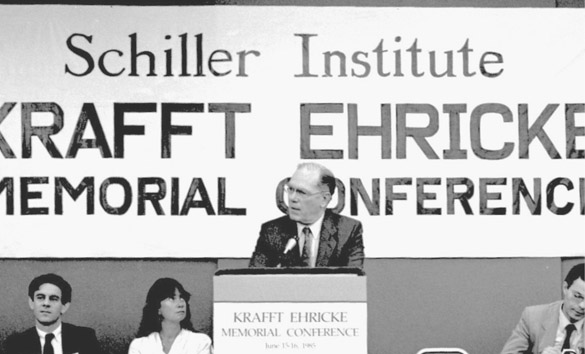 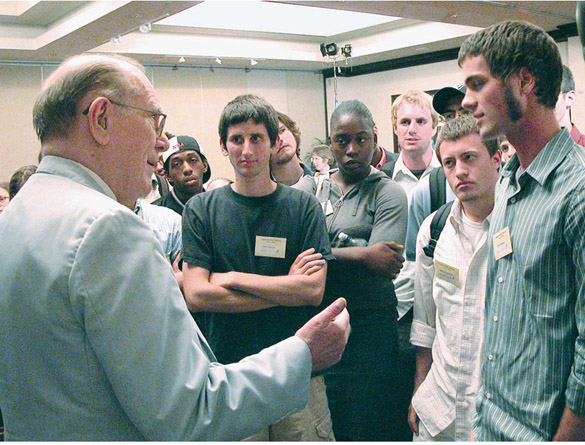 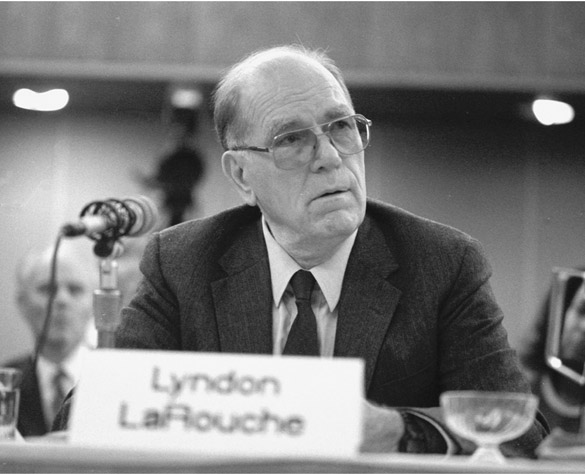 Interspersed during the day were clips of public rallies taking place around the world Sept. 8, notably in Paris, France; Boston, Massachusetts; Washington D.C., Houston, Texas and others. In different ways, they publicized the special occasion of LaRouche’s 100th birthday. In Texas, a sign from an overpass stated, “LaRouche’s Ideas Will Last Longer than Wall Street!”

In the course of the day, short recordings by various individuals were broadcast—some historical, and some made just for the occasion, honoring LaRouche. Video messages came in, from Zimbabwe to Massachusetts.

A tribute by Hulan Jack (1905–1986) was shown, Hulan Jack had served as the first Black Borough President of Manhattan from 1953–1961, and later joined the board of the LaRouche movement’s National Democratic Policy Committee. Jack had spoken in December 1986, describing his relationship with LaRouche and considered the 1988 Presidential election on the horizon:

There was one man who impressed me that his desire is to save the people honestly, fearlessly, and with courage. No man spoke with me and spent four hours with me that traversed the universe the way Lyndon LaRouche did.

Now, 1988 is coming up, and I see the Democratic Party is in shambles. There’s only one man, one man at the present moment that they’re afraid of. Because if you took this man, Lyndon LaRouche, and said to all of those who were aspiring to become President of the United States: “Gentlemen stand up against the wall and tell us what you’re gonna do for the people against the great outline of Lyndon LaRouche.” I’ll tell you something, they’ll all stand up all right. (laughter) But most of ’em are gonna be running for the door (extended laughter). 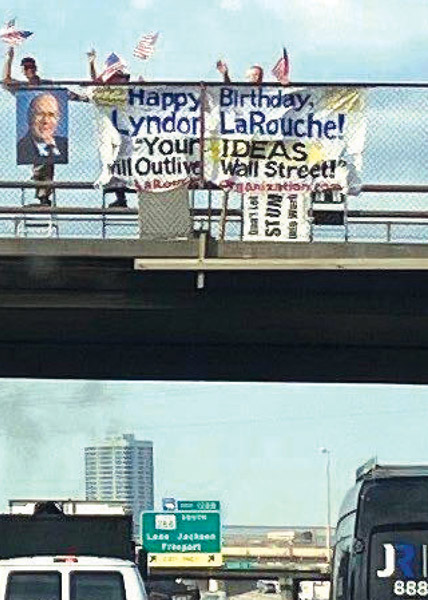 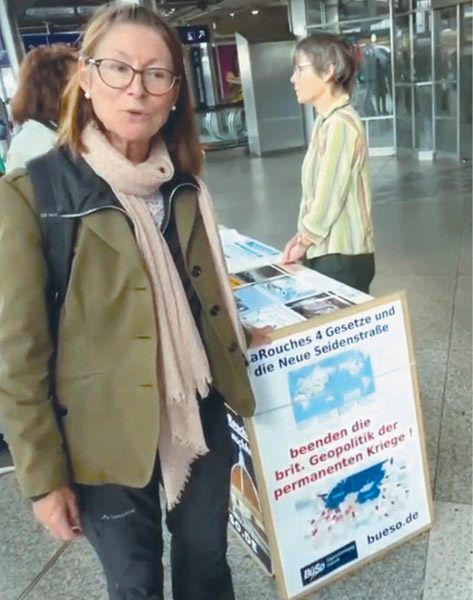 The Party still has not solved that problem, but we are making a strong effort under the leadership of Diane Sare to end their concerns.

The great Italian pianist, Carlo Levi Minzi, reported on his friendship with LaRouche. He thanked Lyn for introducing him to Norbert Brainin, the magnificent violinist who founded and led the Amadeus Quartet through its whole 40-year existence.

Several messages came from France. Jacques Cheminade, leader of the French “LaRouche” political party Solidarité et Progrès, made a brief statement comparing LaRouche to de Gaulle and referring to Lyn’s book, France After de Gaulle. It was announced that a video about Lyndon LaRouche is in preparation in France.

Karel Vereycken, the Vice President of Solidarité et Progrès, told the story of his discovery of what art is all about through LaRouche’s concepts. Vereycken walked the viewers through a painting, in which he had placed LaRouche among Socrates and other historic philosophers, to highlight his immortal influence in bringing people into the light of understanding.