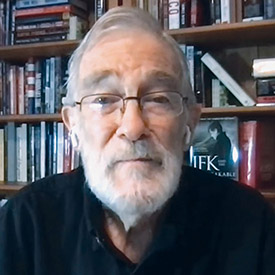 Thank you for inviting me. It’s a profound crisis indeed. It is unique, but there was something similar back in the days that I was born, in the 1930s in Germany. We survived that, and we could survive this one, too.

Thinking back, I remember a young lawyer in Berlin named Raimund Pretzel, who went by the pen name Sebastian Haffner. Later when his diary was discovered—he was in Berlin during the worst of it—I remember that he was trying to make his peace with what was going on. I want to quote a few sentences in English from the English version which is called Defying Hitler; the German version is called Die Geschichte eines Deutschen. Here’s Haffner:

The individual who is opposed to fascism, [is] just an ordinary man with many weaknesses, but he enters the duel with a quiet determination not to yield. You will have to admit that, for someone who is neither a hero nor a martyr, he manages to put up a very good fight. Will you see him compelled to abandon the struggle?

Well, Haffner had to say the following about that:

No. The Germans lost. And why? I do not see that one can blame the majority of Germans who, in 1933, believed that the Reichstag Fire was the work of the Communists.

Or, for that matter, parenthetically, can you blame most of the Western people who are subjected to propaganda that the invasion of Ukraine was “unprovoked”? Says Haffner:

What one can blame them for, is that with sheepish submissiveness, the German people accepted that as a fact. The fire was a fact, and they lost their little personal freedom as though it was necessary. The Communists burned down the Reichstag? It was perfectly normal that the government would take “decisive measures,” reversing all their personal freedoms.

Now, how can I be so confident about that? Because I think that “sheepish submissiveness” is not going to be possible, when people have to put on ten blankets this winter, and still cannot get warm. I think even the sheepish people in Western Europe and Eastern Europe will have to be able to contend with what goes on here, even though they are clearly out-matched by the forces that rule them. I say that with some confidence.

Some of you will know that a Hungarian Jewish lawyer named [Benjamin] Ferencz was the last one to die among the Nuremberg prosecutors. He was a remarkable man. If you don’t know about him, look it up, okay? He had this advice to us. He said, look, if you want to pursue justice, go into it thinking that you’re going to succeed. Because you will succeed if you fulfill three conditions, just three: “Never give up; never give up; and never give up.”