‘Reading His Work, Some New Concepts Just Struck Me’ 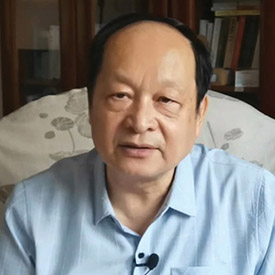 I’m very pleased to be invited to say a few words about Lyndon LaRouche’s contribution to understanding today’s world. I was first introduced to Lyn’s work when I met with Jacques Cheminade in France. He presented me with Lyn’s book, So, You Want To Know All About Economics? That’s the first time I heard about physical economics.

By reading his work, some new concepts just struck me, such as entropy in an economy. If an economy is entropic, it will ultimately run out of development energy, ultimately. Technological and technical innovation is key to maintaining development momentum, and is an important anti-entropic factor.

In Washington, D.C., I had been introduced to Lyndon LaRouche by Mike Billington. Lyn taught me a lot about the evolution of synarchism in Europe and also in the world. Lyn taught me that those people who seek to have control over every country, by meddling with financial crises, may overlook the danger of financial gain. By inducing other countries into financial crises, those synarchists may succeed at the beginning. They may succeed in sheep shearing. But, ultimately, they will kill all the sheep. So, they will also lose the opportunity of further sheep shearing in the end. That’s why, after several runs of financial crises—in Latin America, in Asia, in Europe—the financial crises came home to roost in the United States.

Precursor of the BRI

Today, as we are commemorating Lyn’s centennial, we should consider Lyn’s political legacy seriously, for it has told us that we can only make progress for mankind by promoting technology innovation, by promoting international cooperation, but not by confrontation.

If we let today’s world [be] controlled by those who can find their interest behind the wars and escalation of geopolitical tensions, we will be dropped into a vicious spiral, and end up with our planet’s destruction. So, we should stand up and say, “No,” to those warmongers.