This transcript appears in the September 23, 2022 issue of Executive Intelligence Review.

Upcoming: Vol. II of the Collected Works of Lyndon LaRouche

This is the edited transcript of the presentation of Gretchen Small to Panel 3, titled “Presenting the ‘LaRouche Library’—LaRouche in Dialogue with the Nations of the World,” of the Schiller Institute’s Sept. 10–11 Conference, “Inspiring Humanity To Survive the Greatest Crisis in World History.” Mrs. Small is the President of the LaRouche Legacy Foundation. 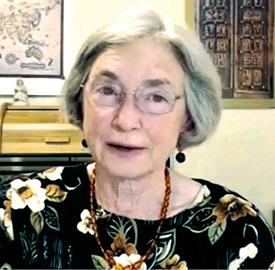 Now we come to the other major project which the LaRouche Legacy Foundation has embarked upon, publishing LaRouche’s Collected Works in a form worthy of such an outstanding thinker, in elegant and sturdy editions which can be passed onto your grandchildren, editions that will last in library collections for decades.

Many of you, I hope, have seen Vol.I, which includes four of LaRouche’s major economic works. I am happy to report today that Vol. II is closing in on being ready for the printer.

This new volume focuses on LaRouche’s writings on culture, a subject which was as central to LaRouche’s entire life’s work as his economic discoveries, and in fact, inseparable from them. In his article, “Politics as Art,” written in the year 2000 and one of the more than a dozen articles to be published in this Volume, he wrote:

My life’s professional work, during more than fifty years to date, has been focussed on precisely that subject-matter so urgently needed under today’s conditions of global crisis: the interdependency of the history of politics and economics with those Classical methods which underlie competence in both art and science.

LaRouche often referred to the three, original, and interdependent discoveries of physical principle which he made during his breakthrough period of 1948–1952, a set of principles the development of which then dominated the rest of his life and accomplishments. The second of those discoveries was his rigorous proof that the loud claims of Immanuel Kant and advocates of “information theory,” that art and science exist in distinct universes, are utterly false. LaRouche wrote:

From the outset of my investigations during the 1948-1952 interval, I have concentrated upon the identity of the nature of creativity as we encounter it in the form of valid revolutionary discovery of physical principle, and also in the form of metaphor in Classical forms of poetry, drama, and music.

He wrote that in his contribution to the release of the Italian translation of the Schiller Institute’s 1992 book, A Manual on the Rudiments of Tuning and Registration, Vol. I, Introduction and Human Singing Voice, in Milan and Rome in 1996—a short gem also included in Vol. II, titled “Music and Scientific Creativity.”

In that same piece, LaRouche called his lifelong dedication to that concept a “choice of vocation.”

So, you can understand the difficulties that come up, in selecting which of his many, wonderful, and quite varied writings on this central subject to include in one volume!

Our aim therefore became that of selecting a breadth of articles, from which, when read as a whole, a serious reader could rediscover for themselves the power of LaRouche’s initial discovery, and its implications for statecraft, economics, politics, for the development of their own intellectual strength—and for our ability to share a hearty laugh at humanity’s foibles, even under the conditions of life we face today.

Many people think of “culture” as a secondary question, often as mere “entertainment,” and that “classical culture” is only for snotty rich people who don’t give a hoot about humanity. Not Lyndon LaRouche. He stated at the outset of his 1998 masterpiece on “The Substance of Morality,” and I quote:

Scientific and technological progress, as such, are indispensable for the continued progress of the entirety of our species. However, when and whether progress, or even retrogression occurs, is never automatic; the actual outcome is a result of what we term “cultural factors,”.… It is “cultural factors” which govern even scientific and technological progress as such, and which also govern the manner in which discovered physical principles are fostered and realized….

In other words, these issues are key to humanity’s survival. He warned that the most powerful technological cultures will be doomed if they do not rediscover the principles of culture which correspond to human creative mentation.

During his five years in federal prison on trumped up charges, LaRouche composed a groundbreaking study, “On the Subject of Metaphor,” to demonstrate how the fraud of the dominant “modernist dogma which usually parades under such various names as ‘systems analysis,’ ‘linguistics,’ and ‘information theory’ ” was even then so crippling the cognitive functions of Americans that we were becoming incapable of self-government.

He countered that pernicious dogma, with a rigorous development of the concept of Metaphor, insisting:

It must be in art as in science. Truthfulness is Socratic irony, and Truth is a metaphor.

Accompanying those two fundamental studies in the volume, are a set of articles demonstrating how classical principles guide true statecraft. Among them, his rollicking 1999 treatise, “Prometheus and Europe,” where he once again takes up the subject of “What art must teach politics”—“real politics, the nature of man.” Here Lyn offers “a method of action” for how to rapidly rebuild the practice of Classical thinking, a “guide” for how to educate, “a small minority of the citizens, who will, in turn, educate others, who will, in turn, educate still more” to think classically, a “chain-letter sort of organizing process” which can save our republic.

But watch out: he admonishes that if American citizens wish to save themselves, they must face up to strategic importance of knowing “how to read a poem!”

Another set of articles chosen for this volume concentrate on music, a subject close to Lyn’s heart and mind. One of these is his November 1988 work, “Beethoven as a Physical Scientist,” written in the midst of preparing for his trial, in which he insists that “the lost language of classical composition can be reconstructed,” writing that doing so is one, and here I quote, of “the leading projects which this aging writer is determined to see completed before he ‘shuffles off this mortal coil.’”

We have a responsibility to complete his intention, and therefore have given special weight in this volume to his numerous works on this subject.

LaRouche called “great musical composition”—with Beethoven’s work as the paradigm—“the science of celebration of the principle of creative life,” and he went to work every which way he could, to help musicians, poets, politicians and citizens everywhere to be able to share in that celebration.

Vol. II of his Collected Works aims to allow an even greater audience to taste the joy which comes from realizing how beautiful a Universe it is, how loving a Creator, who could allow a mind like that of Lyndon LaRouche to flourish!