A Young U.S. Journalist’s View of America’s
Criminal War Policy and the Attempt To Silence Me

This is the edited transcript of the presentation of Bradley Blankenship to Panel 2, “Defend the Right to Deliberate! Speak Out Against Blacklists and the Suppression of the Search for Truth,” of the Schiller Institute’s Sept. 10–11 Conference, “Inspiring Humanity To Survive the Greatest Crisis in World History.” Mr. Blankenship is an American journalist who writes for Xinhua and RT. 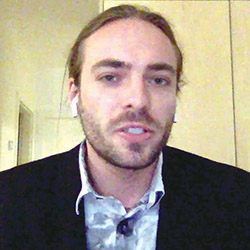 Hey, everybody! Thanks a lot for this opportunity. I think what the Schiller Institute is doing is really great, supporting us who are on the list.

First, I’d like to talk a little bit about my perspective, because I think—no offense to the other people on the list—but I think I’m probably the youngest person there, so my experience is a little bit different. Before Scott Bull rushes me here, I have to say that just being the age that I am, and experiencing the things that I have—for example, I was born in Cincinnati, Ohio, I grew up in northern Kentucky, which is basically the epicenter of the heroin and opiate crisis in the United States. The experience I’ve had seeing how little the United States government cares about its citizens, has inspired me to do all the work I do now, especially criticizing the policies of the U.S. government.

Because of that, because of what I’ve witnessed in my personal life, the destitution of people around me and so on, and also discovering U.S. foreign policy later in life, this has all really driven me to the point where I can say I don’t feel like I’m a patriot. I don’t feel like I respect my country. And it’s precisely because of lists like this, that target people like me and people like Scott Ritter and others, people like Geoff Young.

I should note that this is not the first time that has actually happened to me. Several years ago, at the height of the Syrian war, I was affiliated with a news agency called Al-Masdar news agency. We were accused of being funded by Hezbollah, which many of you know is a U.S.-designated terrorist organization. So, that implied that we were somehow affiliated with a terrorist organization, and this accusation was levelled by an Israeli-backed group called PropOrNot, which was picked up by the Washington Post. It was on the international media after this. I was personally accused of being funded by Hezbollah, which you can imagine, is quite a heavy accusation.

I was also affiliated with TeleSUR. I lived in Ecuador for a while. The U.S.-backed Lenin Moreno regime sanctioned our organization. We were unable to get paid, and the police were harassing us and in particular me, while I was the editor on duty at this building. We had armed guards there to protect us. You can imagine, as a person in their early 20s, that this is quite a scary situation. Shortly thereafter, I moved to Europe, and I right now live in the Czech Republic, where I have also been targetted for my views.

For example, at one point, the Prague City Council tore down a statue to Ivan Konev, the Soviet General who liberated the Czech Republic from Nazi tyranny. They tore down the statue, and shortly thereafter built a placard in Prague Six [a residential area in northwest Prague] that is dedicated to Nazi collaborators. I pointed this out in a column, and I was immediately targetted by the Czech media, Czech nationalists, anybody you can think of. I’ve been targetted by tabloids here, people trying to dig into my life. Shortly after Russia entered the conflict with Ukraine, I had people show up to my house—a mob trying to attack me, and I had to call the police.

This is not a joke; this is our lives. Particularly here in the Czech Republic and many other parts of the world that used to be part of the Warsaw Pact, there are laws in place—for example in the Czech Republic—that you can be sent to prison for having pro-Russian views. Though I understand that this has not been implemented so liberally, it is still something that can happen. And me particularly being on this blacklist and a foreigner in this country, I’m at particular risk of this.

I just wanted to say that, especially addressing the question from the gentleman from TASS, that imprisonment is a form of political violence. And yes, I can totally imagine—and it is happening now—there are people here in the Czech Republic who have been prosecuted and sent to jail for having allegedly pro-Russian views. Depending on how far they’re willing to take this, I could be one of those people.

In fact, I should note that I have been summoned to the Ministry of Interior next week. So, in fact, I might be detained at that point. This is something that I’m dealing with in my life.

I live in Europe; I’m seeing the energy crisis here. For example, we just had 70,000 people march in Wenceslaus Square in the center of Prague, opposed to their own government’s policy and demanding the resignation of the Czech government because of their policies. They also said that I’m a Russian propagandist because I said Ukraine is a hotbed for right-wing extremism. I was on RT’s “Cross Talk” with Peter Lavelle, and the day after that I said, “The day after that was the Buffalo, New York shootings.” This is happening to people right now.

According to the list, I said that I believe the world should negotiate with Putin. What I said was the world should negotiate with Russia. That is a principled, pro-peace position. If you care about Ukrainian life, Ukrainian infrastructure, the Ukrainian economy, you don’t want this war to continue. That’s exactly what we’re doing with our policies of arming and propping up the Zelensky government. That has nothing to do with being pro-Russia. I will also note that on my column in RT, I explicitly said that I believe that the war is a violation of international law. So, to describe me somehow as supporting the Russian state, is absolutely ridiculous.