Has London Scheduled a Crimean Missile Crisis for October?

Sept. 23—“There is one thing, and one thing only, which could save the world, and that is that America should make war on Russia during the next two years, and establish a world empire, by means of the atomic bomb.” —Bertrand Russell, September 1945.

How did we arrive here, at what former Marine weapons inspector Scott Ritter refers to as “one second to midnight?” The doomsday clock is literally one second to midnight and we in the West have only ourselves to blame. Who has decided for us that thermonuclear war should be declared on Russia? When was that decided, and why were we not (mentally) present?

In a sense, that decision can be said to have been made just after April 12, 1945, the date of the death of President Franklin Delano Roosevelt. As to who has decided for thermonuclear war, consider the words of the London Economist of 2007, as it spoke, futuristically, about what it projected to be the deployment of the as-of-then unelected Barack Obama:

In the dangerous second decade of the [21st] century, when Vladimir Putin returned for a third term as Russian President and stood poised to invade Ukraine, it was the EU that pushed the Obama administration to threaten massive nuclear retaliation. 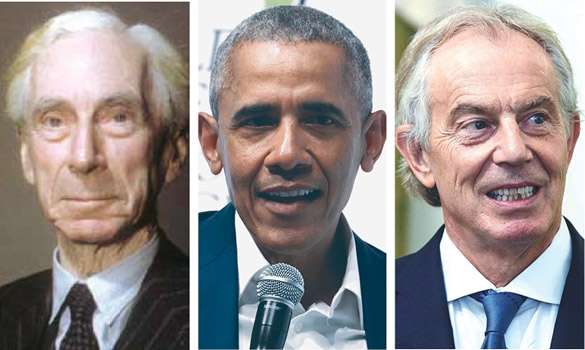 Is it Britain that, on the eve of the 60th anniversary of the October 1962 Cuban Missiles Crisis, is pushing the world toward thermonuclear extinction? Former German CDU defense spokesman Willy Wimmer, in delineating the changed strategic reality that now confronts the world once the referenda are concluded in the next week, in the four areas now occupied by Russia’s special military operation, chose to remind the world that NATO had violated international law in launching war against Serbia in 1999. That military action was done under the guise of something called “Responsibility To Protect.” RTP was first introduced to the public by London’s Tony Blair during a speech he gave at the Chicago Economic Club.

“It took Tony Blair one speech in 1999 to trap the Western world in an unending series of interventionist wars. We may care about the people of Tibet, Baghdad, and Libya, but are we the knight-errant of the human race?” asked author Geoffrey Wheatcroft, in a 2011 article, “Once Upon a Time in Westphalia.” Perpetual war, scrapping the 1648 Treaty of Westphalia, for over three centuries a cornerstone of civilized conduct in war, has been British policy since 1999.

Now, if unchecked by the efforts of individuals and organizations working with the Schiller Institute, Anglo-American-instigated perpetual war will “go thermonuclear,” no matter what is said to the contrary.

The driving necessity behind promoting costly, unwinnable wars is the moral and economic bankruptcy of the neoliberal system. But it is the Malthusian, predatory mind-set, and the addictive culture of death into which the trans-Atlantic world has descended, which terminally grips the already-supplanted Anglo-American “masters of the universe.” The dead hand of the British Empire, King Charles III, rests, and weighs upon the brain of the world. The weapons of war are pointed also at the populations of Europe, and revolt is in the air and the streets against this self-inflicted madness.

In truth, however, the populations of Europe and the Americas were always seen as expendable, lending a macabre irony to the slogan, “Now, we are all Ukrainians.” Heat, food, health will all be taken away, now, unless they fight. These populations must be brought to realize that the financial oligarchy have also placed them on a universal “kill list.” Helga Zepp-LaRouche, United States Senate candidate Diane Sare, and the thousands of others named on the Ukrainian lists are merely the first.

With a growing population placing an increasing strain on the planet’s finite resources, we have to reduce emissions urgently…. Here is needed a vast military-style campaign to marshal the strength of the global private sector.”

Every available resource is to be deployed—not “to stop global warming,” but to conduct total war against Russia and China, and anyone else opposing that total war policy. The purpose behind the global warming pretext is now being fully revealed.

That most bellicose Prime Minister Liz Truss has just called for an “economic NATO,” revealing, as Helga Zepp-LaRouche and the Schiller Institute have consistently contended, that the sanctions policy was actually, in the words of French Finance Minister Bruno Le Maire, “all-out financial nuclear war.” Truss said:

No doubt Truss, the former Foreign Secretary, will also now seek to implement, especially against those African, South American, and Asian nations seeking to join the Belt and Road Initiative, the recommendations of the Chatham House June 2022 report, “NATO Must Prioritize Climate Change as a Security Issue.”

We have now arrived at “one second to midnight,” with the United States and Great Britain directly deploying the fascist Azov Battalion, reinforced with many trained specialists and NATO personnel and weapons, fighting an “Afghansi”-style war on Russia’s border, using what has been termed the “Resistance Operations Concept.”

As of a few days from now, however, if things go as planned, those forces may find themselves inside of Russia, as a result of the referenda now concluding. The Economist is calling for more weapons, more training, and more money for Ukraine. Then, there is the May 20 article by Malcolm Chalmers, Deputy Director General of the Royal United Services Institute (RUSI), “This War Still Presents Nuclear Risks—Especially in Relation to Crimea”:

If a red line were not accepted by Ukraine, Russia might then feel that it had to consider a series of further escalatory options, such as putting its nuclear forces on higher alert. Faced with the alternative of the likely loss of Crimea, Putin might believe that Ukraine (with U.S. encouragement) would be likely to blink first. It would be a moment of extreme peril, with all the parties seeking to understand the intent of each other even as they looked to pursue their national interests.

Precisely because of the peril inherent in such a situation, a nuclear crisis of this sort could make it easier for leaders to make difficult compromises....

All saner persons, especially those of any influence whatsoever, have to join the Schiller Institute and speak out now. Hundreds, thousands of people should move everything off their schedules as possible, to deploy for the month of October. Contact others you know and give them the opportunity to participate. In the name of what the world fought fascism in order to preserve, in honor of the 100 million that died as casualties of one type or another in those years, and in recognition of our debt to those yet to be born, including on other planets, we must not fail humanity in what may turn out to be, in the subsequent weeks, days, and hours ahead, the most dangerous period in all of human history.