How Is Promoting a Realistic Peace Plan a ‘War Crime’?

This is the edited transcript of the presentation of David T. Pyne to Panel 2, “Defend the Right To Deliberate! Speak Out Against Blacklists and the Suppression of the Search for Truth,” of the Schiller Institute’s Sept. 10–11 Conference, “Inspiring Humanity to Survive the Greatest Crisis in World History.” Mr. Pyne is Deputy Director of National Operations for the EMP Taskforce on National and Homeland Security, and also writes for The National Interest magazine. 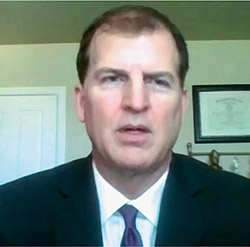 I think this conference is very important, very timely, given that President Biden has recently issued a prime-time tirade denouncing 74 million Americans who are supportive of America First policies, America First foreign policy, as domestic violent extremists and fascists. I think his administration has been the one who is actually pursuing such fascistic methods and policies, and trying to censor free thought, especially any thoughts that would go against the administration’s war policy in support of, instead of ending, the war in Ukraine, actually lengthening it.

Just to give a little background. I currently work as the Deputy Director of National Operations for the EMP Taskforce on National Homeland Security. I’m a former U.S. Army combat arms officer, I also worked as an international programs manager for the Department of the Army Headquarters Staff in charge of armaments cooperation with the former Soviet Union, Eastern Europe, the Middle East, Africa, and the Americas from 2000-2003. I have two graduate degrees. I completed a master’s degree for national security studies from Georgetown University. And I’m currently serving as a contributor to The National Interest, a foreign policy journal. I was also a contributor to Dr. Peter Pry’s book, Blackout Warfare, as well as his upcoming book, Will America Be Protected? which is due out later this year. And finally, I’m editor of a newsletter titled, “The Real War,” which is available at https://dpyne.substack.com.

Back in January, I began writing a number of articles in support of peace in The National Interest. I warned that if the Biden administration didn’t agree to Russia’s essential basic demand that we issue a written guarantee that Ukraine would never be allowed to join NATO, then Russia would invade Ukraine later the following month. And of course, that’s exactly what happened.

Then I began writing a number of articles with ideas for how we could negotiate a mutual security agreement, similar to, but not exactly the same as what Russia proposed back in December, and kind of de-escalate our hostilities and all of our conflicts with Russia so that we could re-establish a more just and lasting peace in Europe and avoid any future conflicts with Russia.

On June 18, I published a 15-point peace plan to end the war in Ukraine. That is something that put me on the radar of Ukraine. I previously had published a peace plan back in early March, and received some negative feedback from a Ukrainian source in April, denouncing me as a “paid agent of the Kremlin.” In this subsequent article, in June, it was essentially about ending the war with kind of a peace without victory.

Under my proposal, Ukraine of course would become neutral, cutting off all ties with NATO. That’s something that Zelensky said he was open to, and would accept, as early as February of this year, after the invasion. Russia would have to withdraw from all Ukrainian territory. I don’t consider Crimea to be part of Ukraine anymore, because obviously it was annexed by Russia back in 2014, except for the Donbas. The Donbas region [could] have a popular referendum to decide on the question of independence. That is what got me in trouble and got me put on this blacklist that was issued by the Ukrainian Center for Countering Disinformation, which I have since learned is U.S. government funded, which I find very disturbing.

I received a deluge of negative emails, scary emails from Ukrainians attacking me, using a lot of profanity and denouncing me as a Russian agent for publishing this very sincere peace proposal, which I think would be fair to both Ukraine and Russia. I think it’s something that is realistic. We have to be realistic. I’m a foreign policy realist. Yet, it’s something that I think would end the war and end the death and destruction in Ukraine. And we could accomplish that very quickly and have a return to normalcy in Europe, which would allow for the process of Ukrainian reconstruction to begin.

I also learned that noted national security strategist Edward Luttwak was put on the Ukrainian blacklist for the same reason that I was—he had also proposed some sort of popular referendum in the Donbas region on the question of independence as a potential compromise.

I do want to say that I’ve since seen some signals from the Russian government that they would be supportive of a peace plan along the lines that I issued. So, despite the obvious fact that they’re directly responsible for the war in Ukraine, because they invaded Ukraine, they’ve actually been the most interested in peace, because they have very limited objectives that they’ve articulated beginning the day after their invasion. I’ve been tracking all their peace proposals, and those peace proposals have remained the same since early March. Again, the only major difference between what I proposed and what they proposed is the idea of a popular referendum, which I think they’re coming around to. But that would leave open the possibility that Ukraine could expel Russian forces from all of Ukraine, including the Donbas, were the people of the Donbas to choose to stay with Ukraine versus becoming independent.

It’s very difficult for me to understand how the Ukrainian government could possibly denounce me as a Russian agent, given the possibility that this could provide them with the opportunity to essentially win the war in a bloodless victory. I’ve learned that other more well-known Americans on this list include Senator Rand Paul, former Representative Tulsi Gabbard, Colonel Douglas Macgregor, and Dr. John Mearsheimer, who is one of our premier foreign policy analysts from the realist school, as I am.

In no way are any of us guilty of disseminating Russian disinformation. I think the only real offense that we’ve committed is that we are much more supportive of a policy of peace rather than war, and that we’ve been very patriotic in that support. America’s lasting foreign policy, at least prior to World War I, was one of supporting peace and being the peacemaker of the world, rather than the peacekeeper of the world in terms of being a world policeman. I think we need to return to doing that.

But Biden’s undeclared proxy war against Russia in Ukraine, particularly in terms of providing long-range rockets to Ukraine to strike Russian targets inside Russian territory, I think is greatly increasing the chances of Russian nuclear escalation. And the constant onslaught of Ukrainian government war propaganda and disinformation has really had a negative impact on our national security, and I think it’s something that we need to counter. Because the number one national security interest of the United States is to avoid a nuclear war with Russia and China.

Since that list was issued, I’m very pleased to hear that as of August 11, the Ukrainian Center for Countering Disinformation removed from its website its disgraceful blacklist of American citizens and folks from other Western countries. And I credit EIR for helping to accomplish that, so I’m grateful to them for all the hard work they’ve done to do that. But I think the truth is coming out about Ukraine’s corrupt and autocratic leader. Zelensky is not really a democratic leader, he’s much more of an autocrat, and also very corrupt.